As most of you who have followed us the last decade, you must have realised that we covered much of Borneo island but little in and around the city we lived in which is Kuching. More than half the decade we concentrated around the whole of Kalimantan because that was where information in English we thought was lacking. So for the sake of foreign visitors to this beautiful island we were hoping our travel contributions could be of some help to them.

In the quest to cover as much as possible those far away areas we neglected what was nearer to home. With the travel restrictions imposed by Covid lockdowns, comes this opportunity to do the short trips visiting the nearby areas and villages.

One of such was the visit to this triple village of Skuduk, Payang and Chupak. It was our first visit despite the fact that they were just a mere 40km away from the city. The photos of our friend Simon Sandi on Facebook of his in-laws’ paddy field in Skuduk were too enticing to delay any longer. 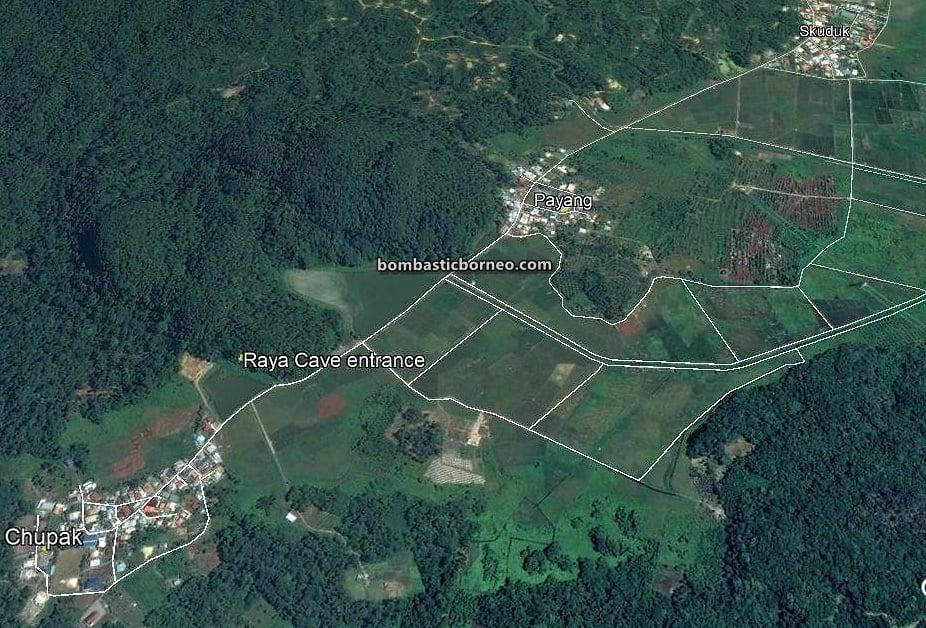 One cloudy Sunday morning in mid January ’21 we drove to Skuduk a small farming Bidayuh village to meet Simon a retired forester who has clocked up more mileage on his cycling adventure than any friends I have ever known.

Anyway, upon arriving at Skuduk, Simon led us to a shack where his in-laws’ field was. Fresh looking green fields of wet paddy in a huge grid lay out with neighbours’ fields next to each other. Harvesting should start in late February to late March. Here they practice double cropping a year experimenting with several varieties of hybrid rice. 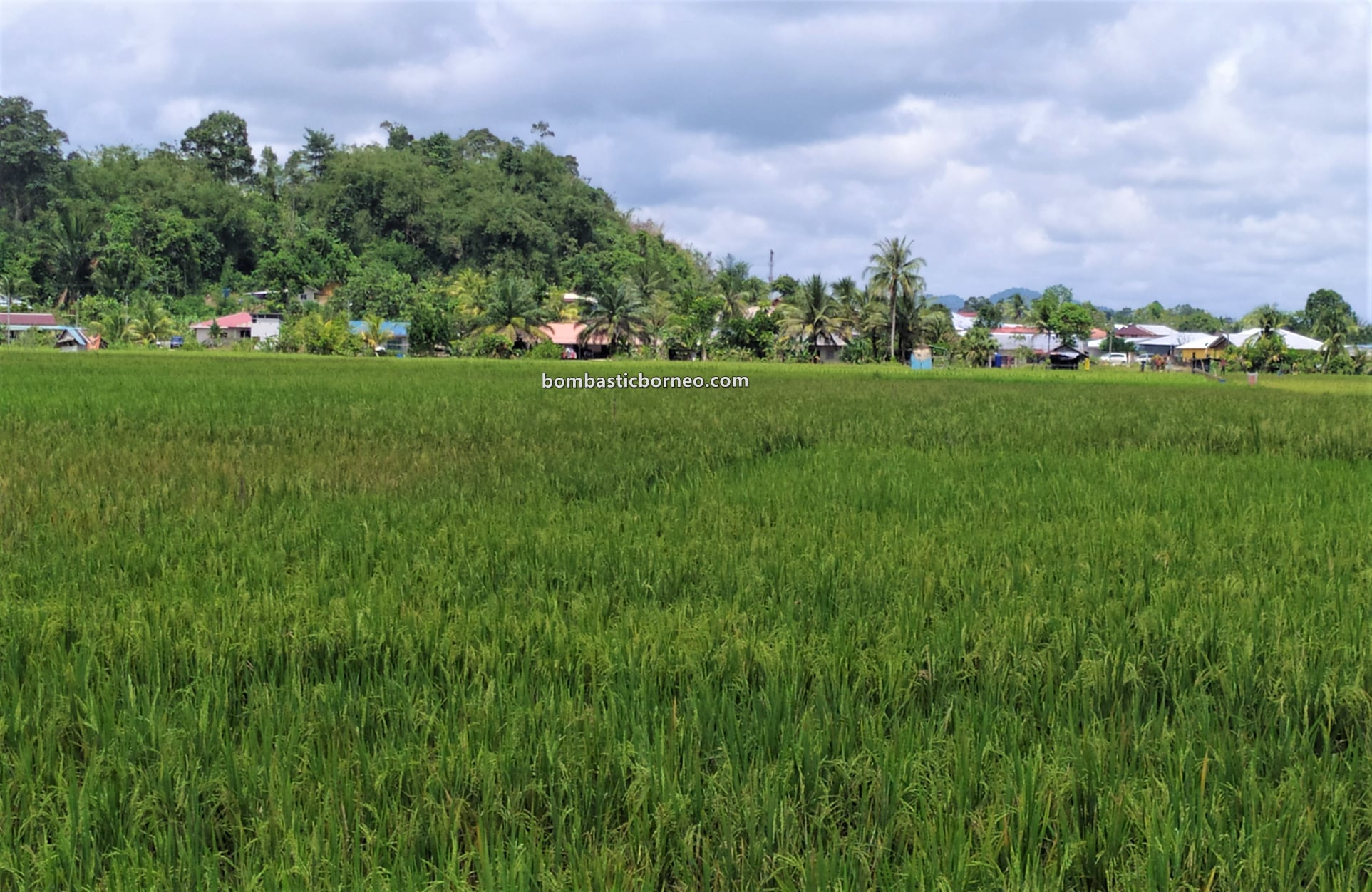 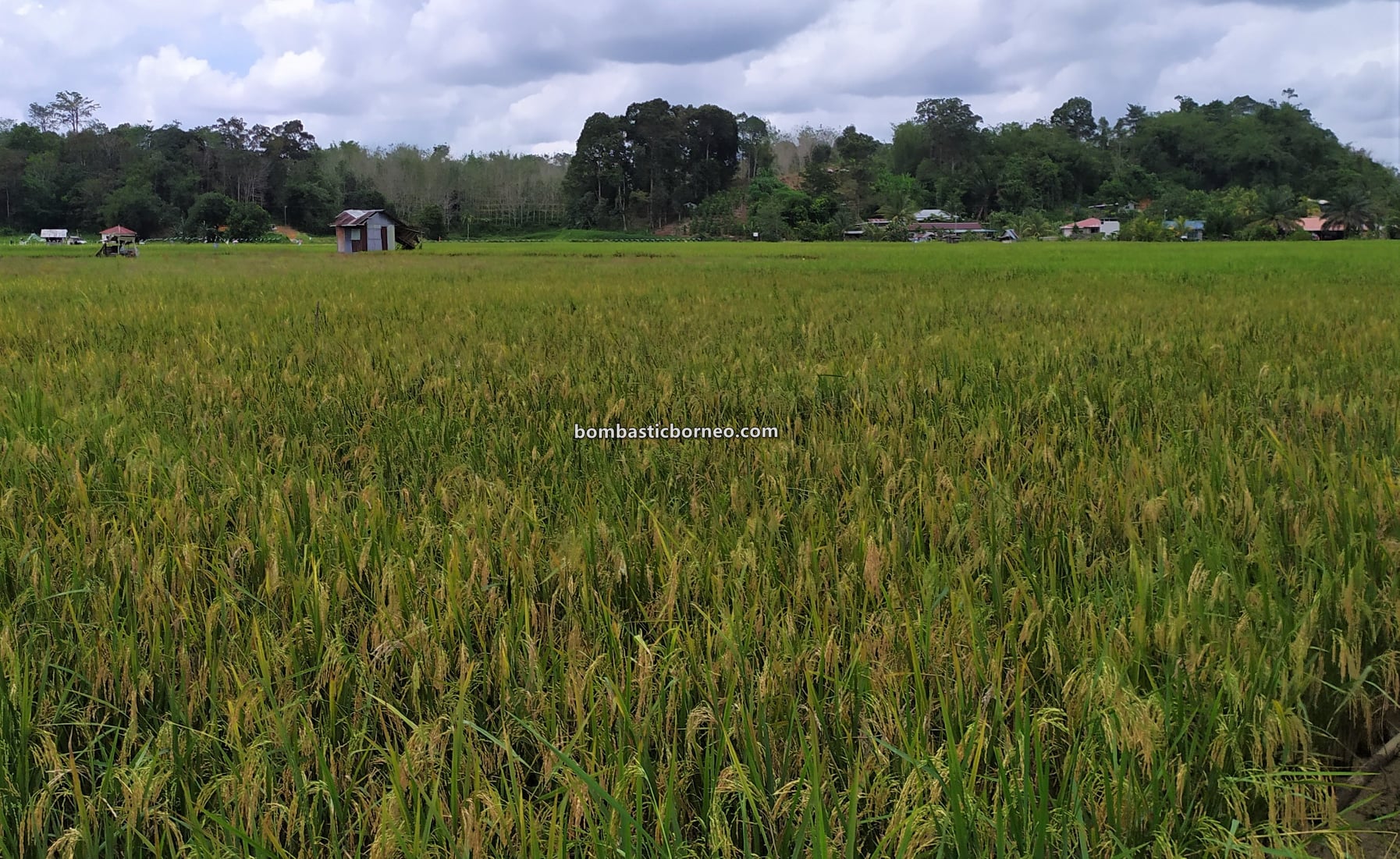 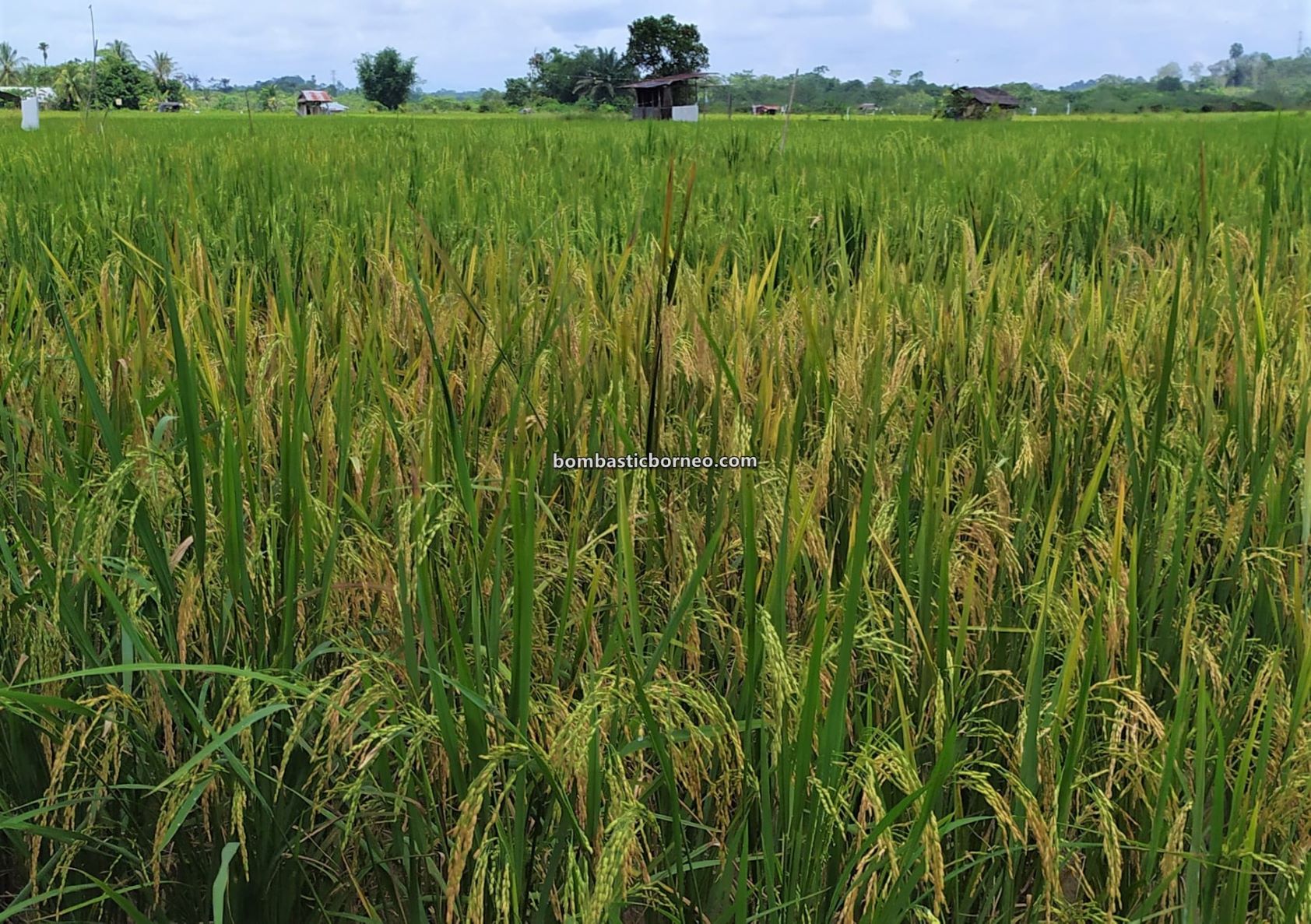 The reason we came here was to do a drone video of these paddy fields but in less than 3min after launching our drone, the lens fogged up. This is a problem I constantly face here in Borneo due to its high humidity, especially so during the landas season. Was forced to land the drone to put it under the sun for 10min with the hope the vapour inside the lens evaporate. It did not work this time.

Abandoned the shooting and drove to Payang and Chupak instead to check out Raya Cave. 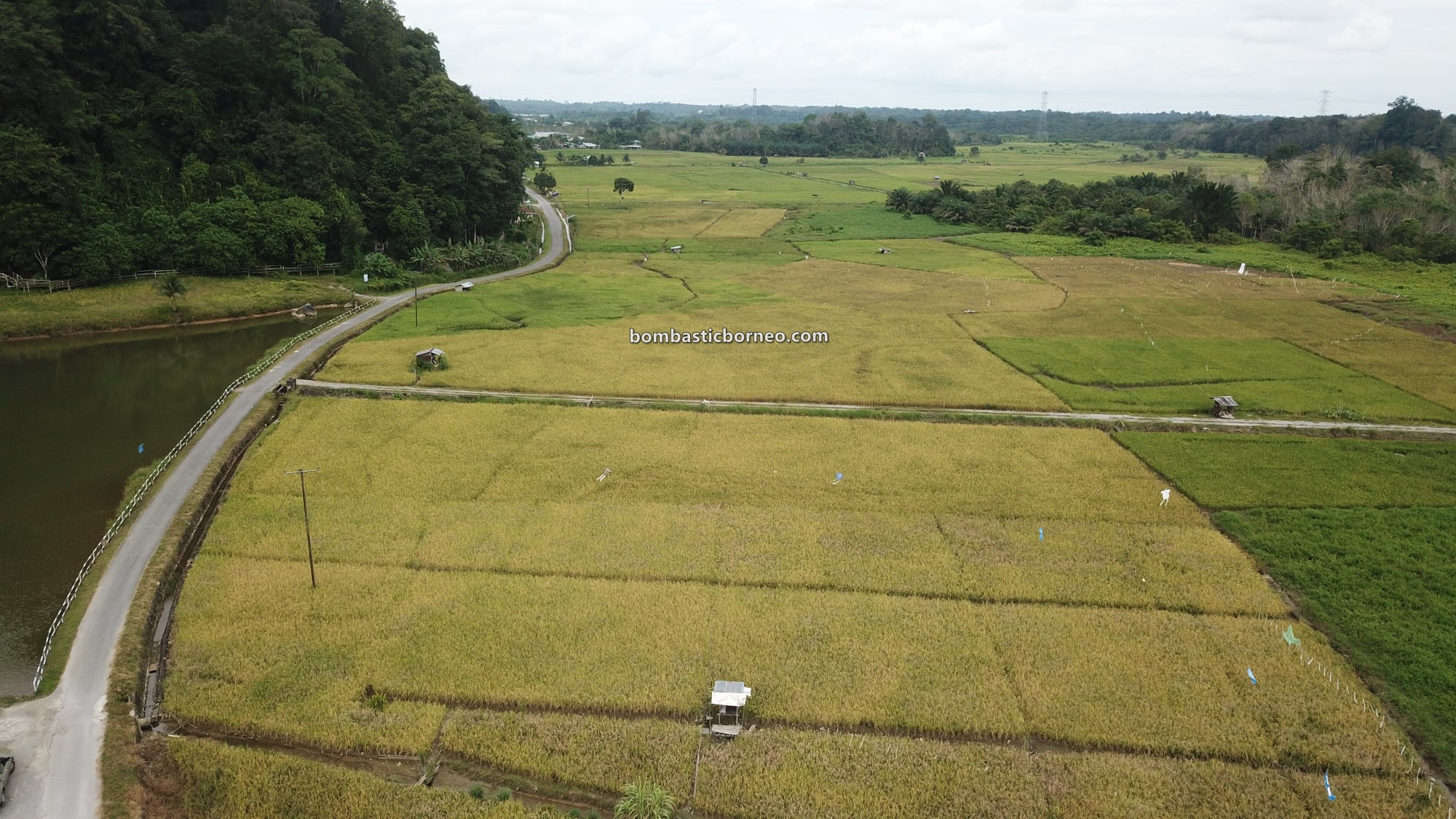 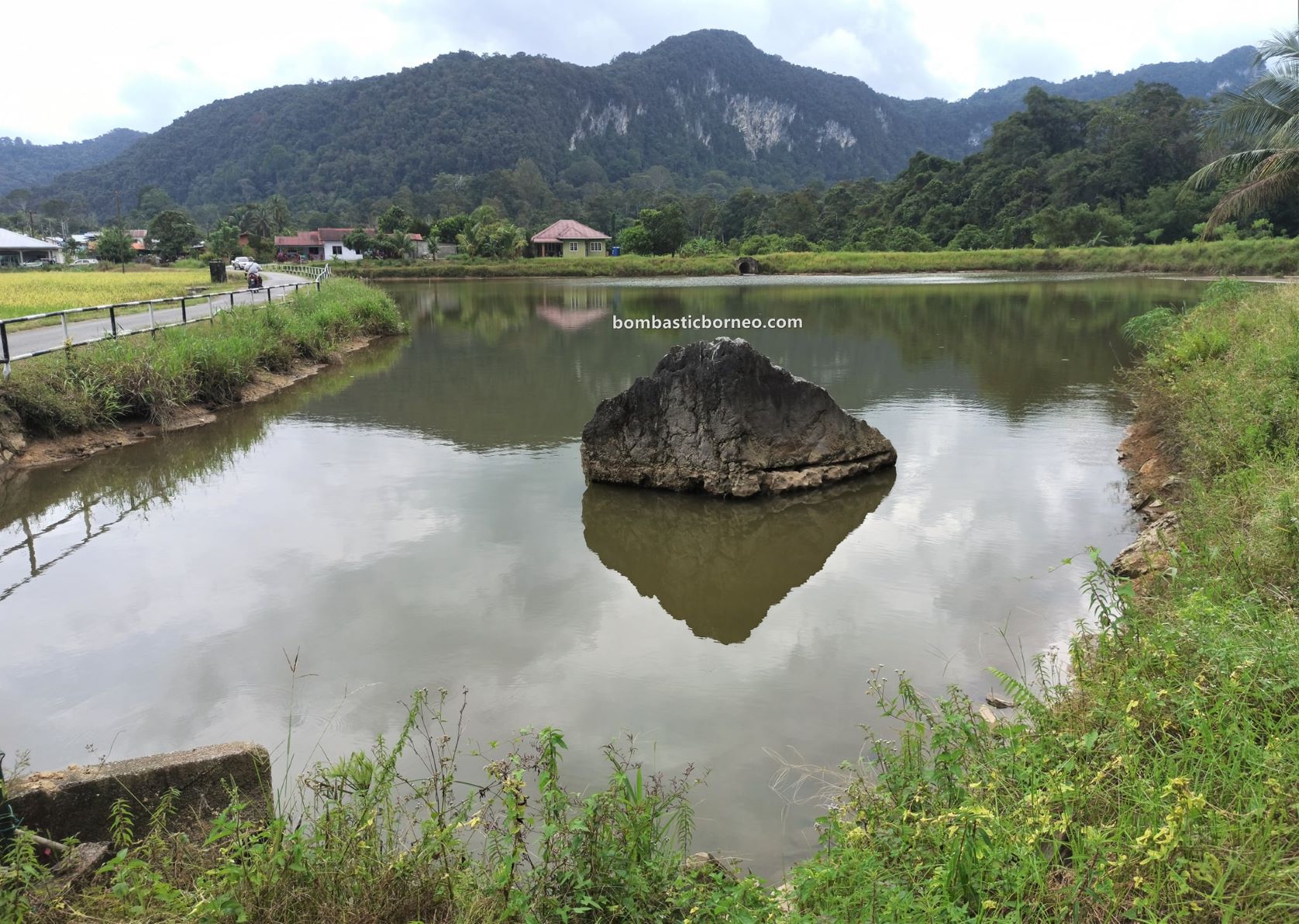 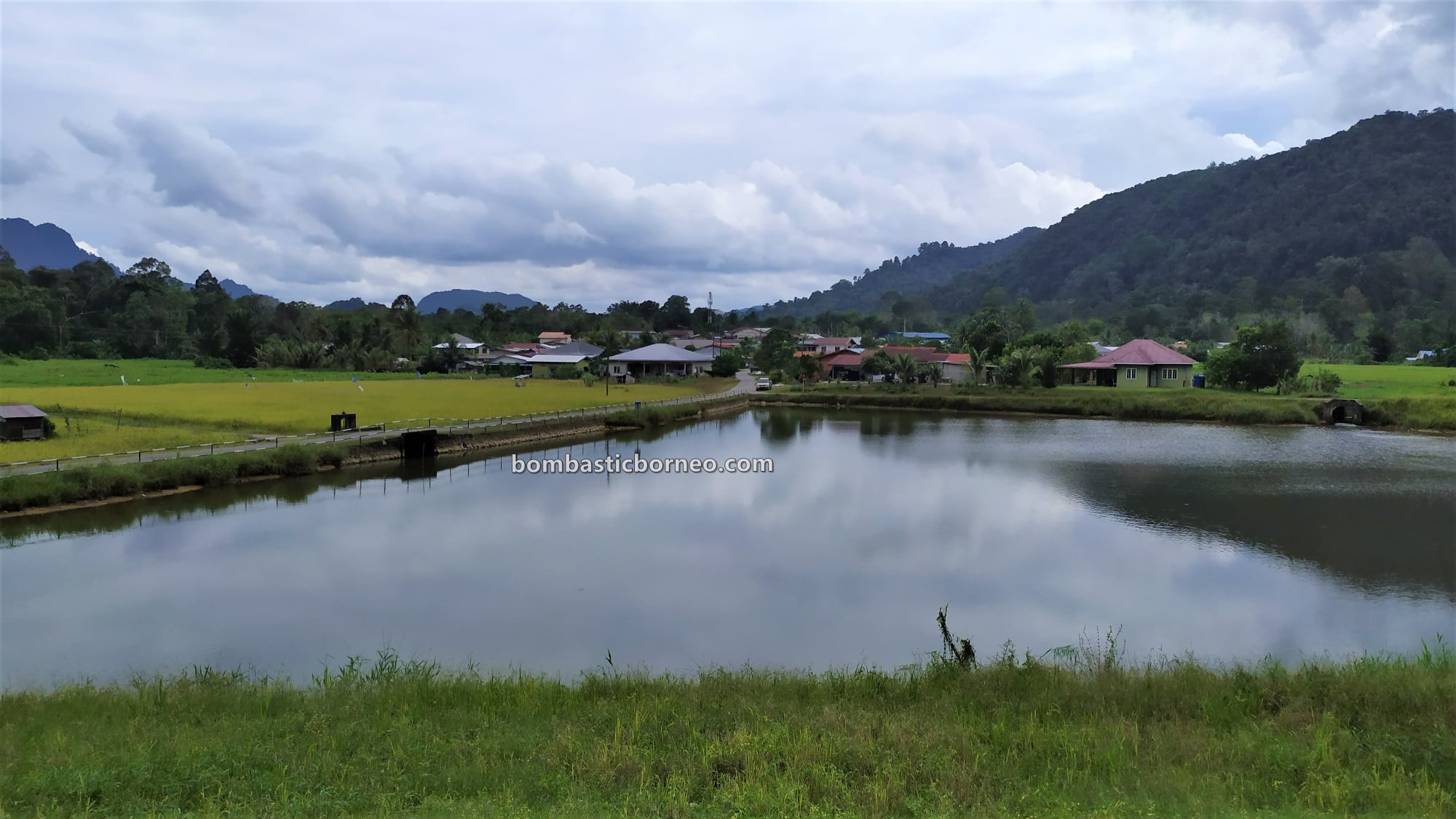 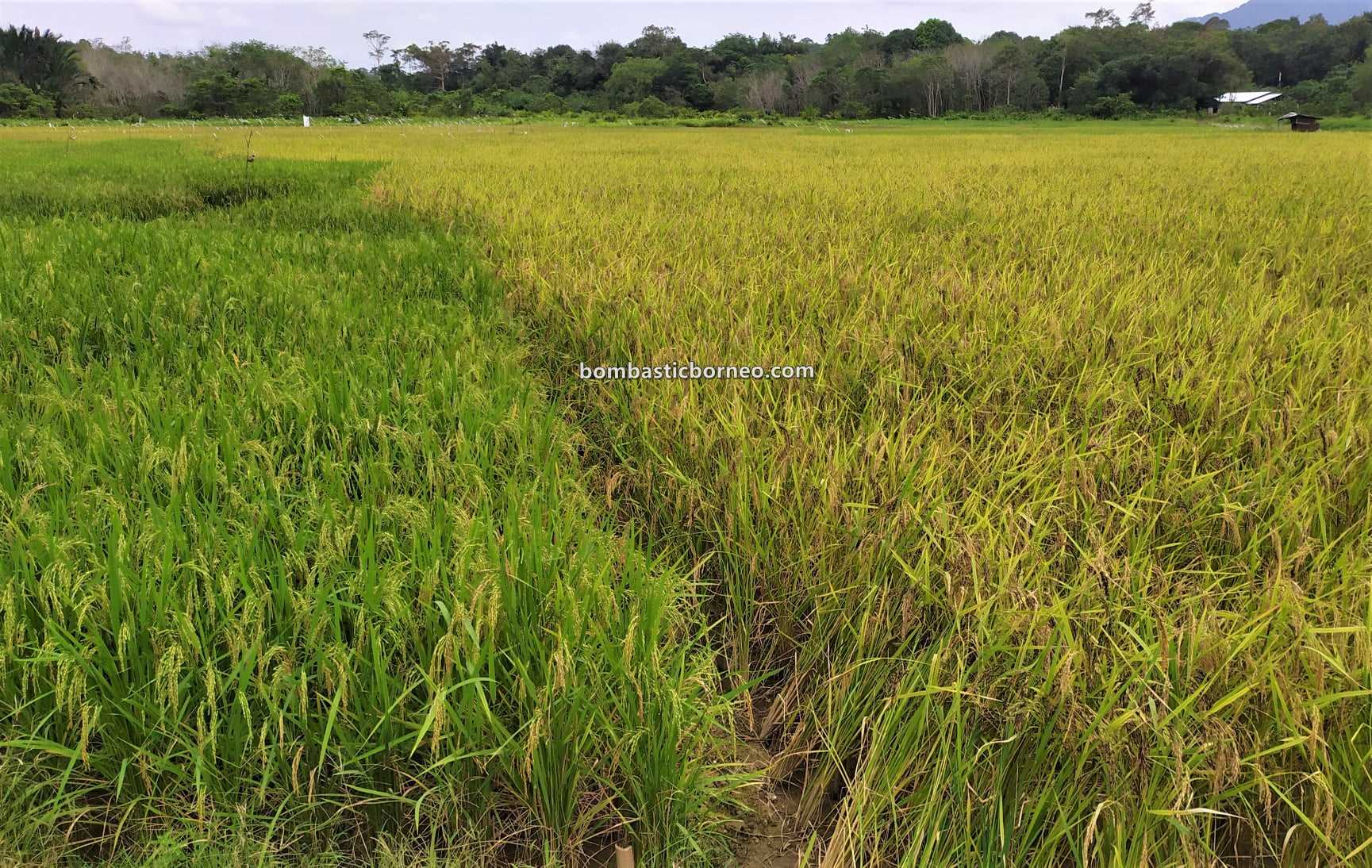 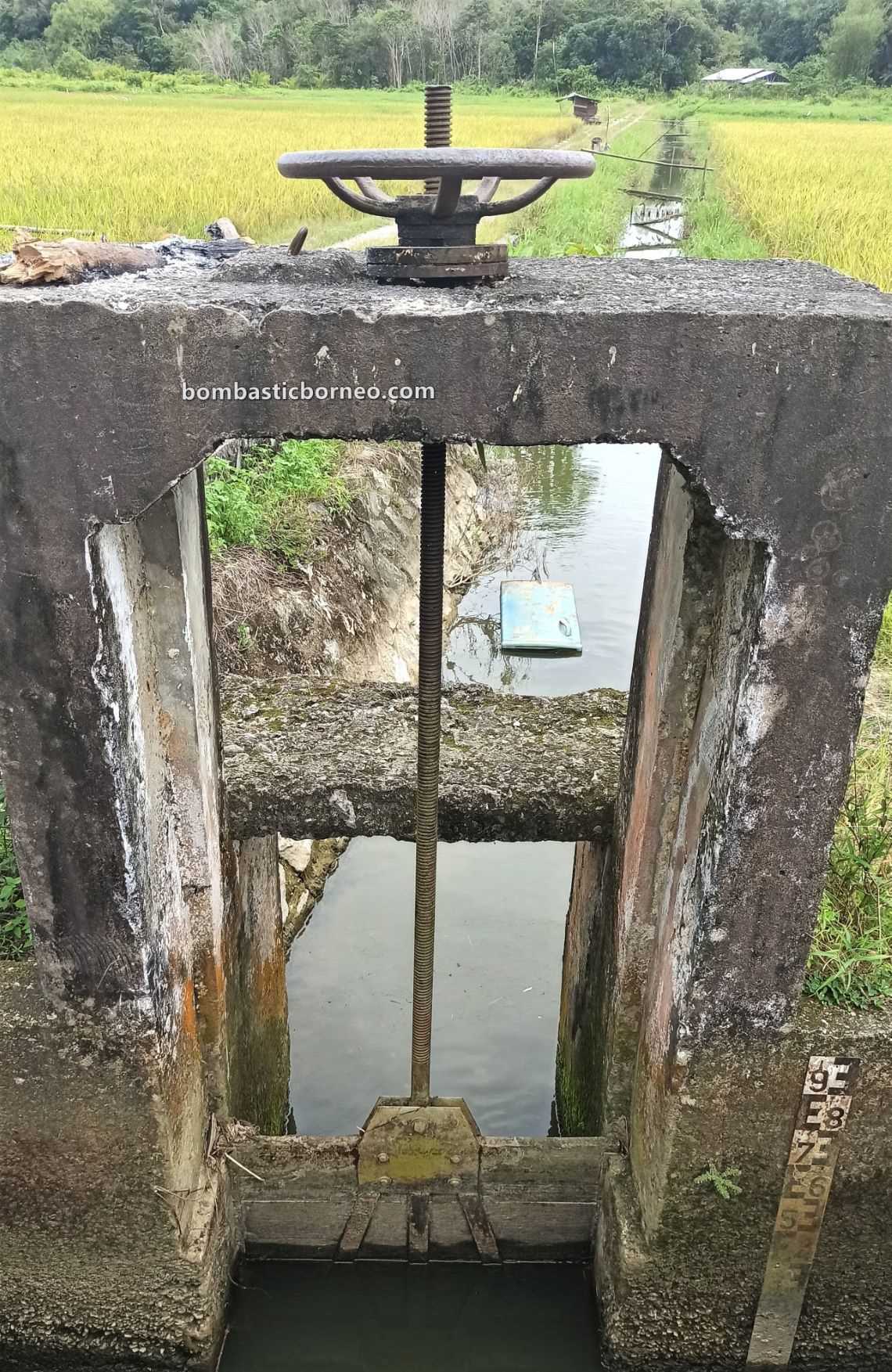 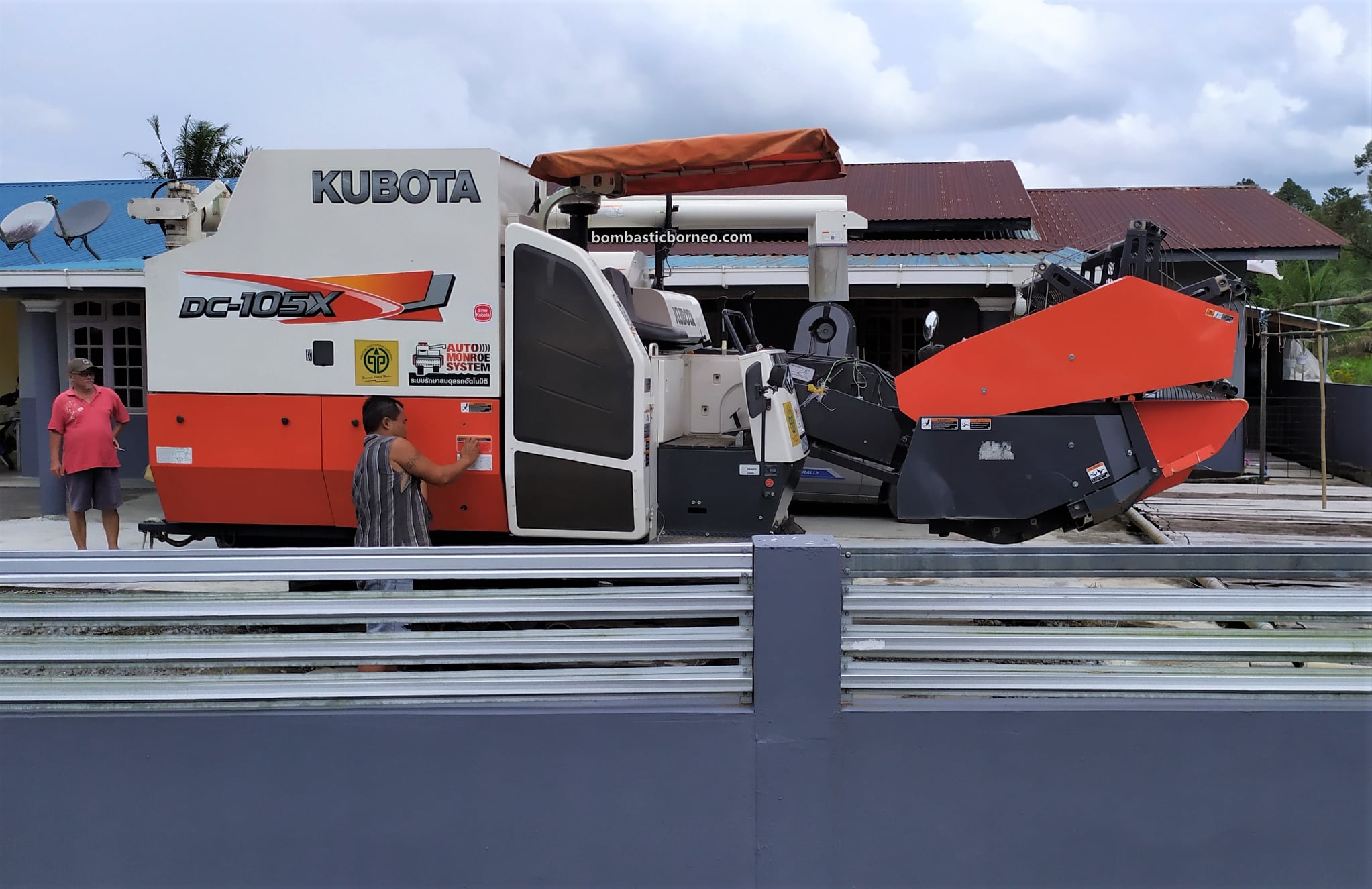 Bumped into Gerald an Iban married to a local lady here in Chupak. He volunteered to bring us to Raya Cave using a shortcut next to the reservoir instead of using the dilapidated plank walk.

The wooden gazebo just outside the mouth of the cave was equally bad and the wooden ladder leading down to the cave had completely fallen apart. While most villages around Kuching have upgraded their tourism products, Chupak folks still seemed uninspired. 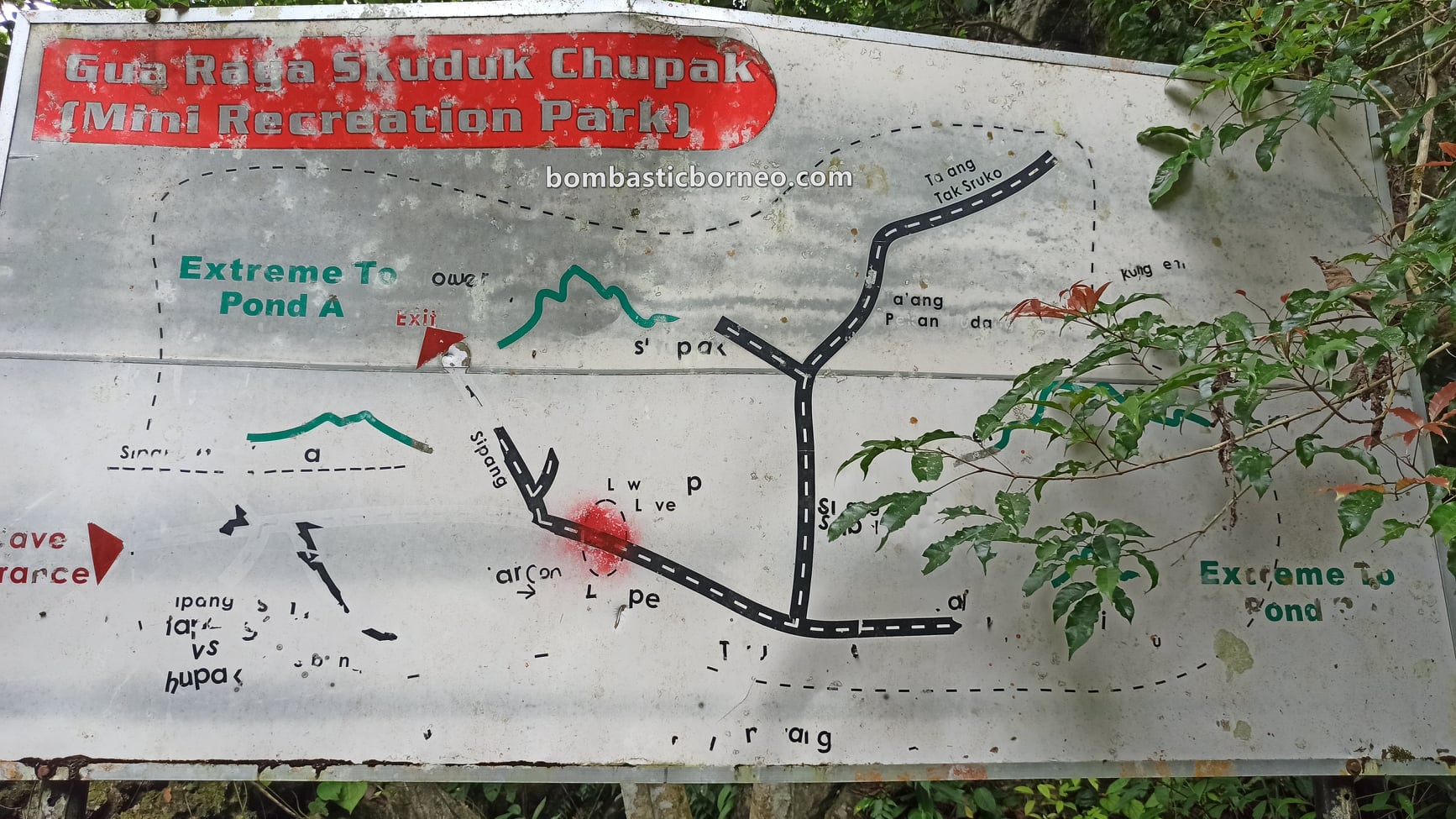 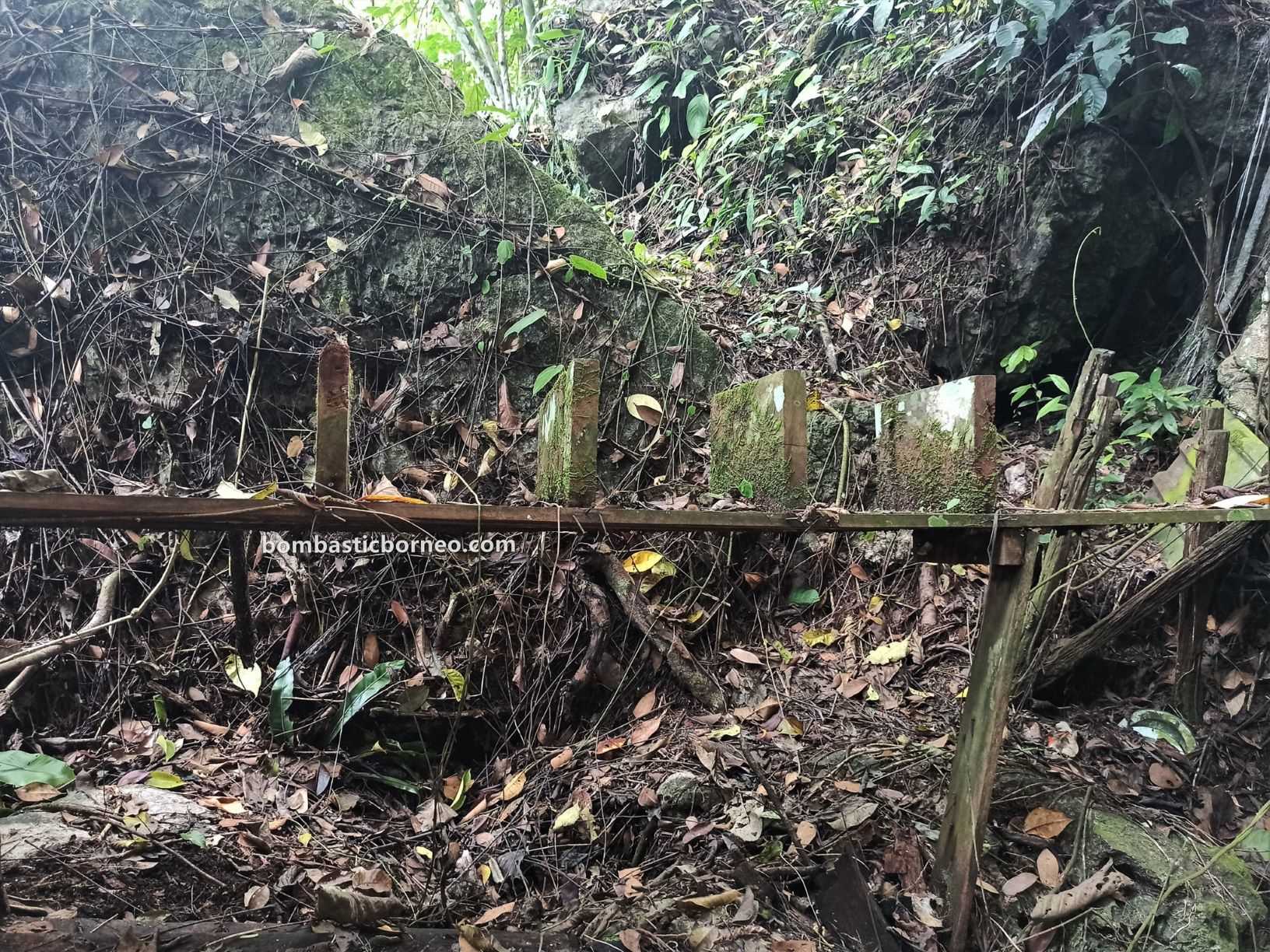 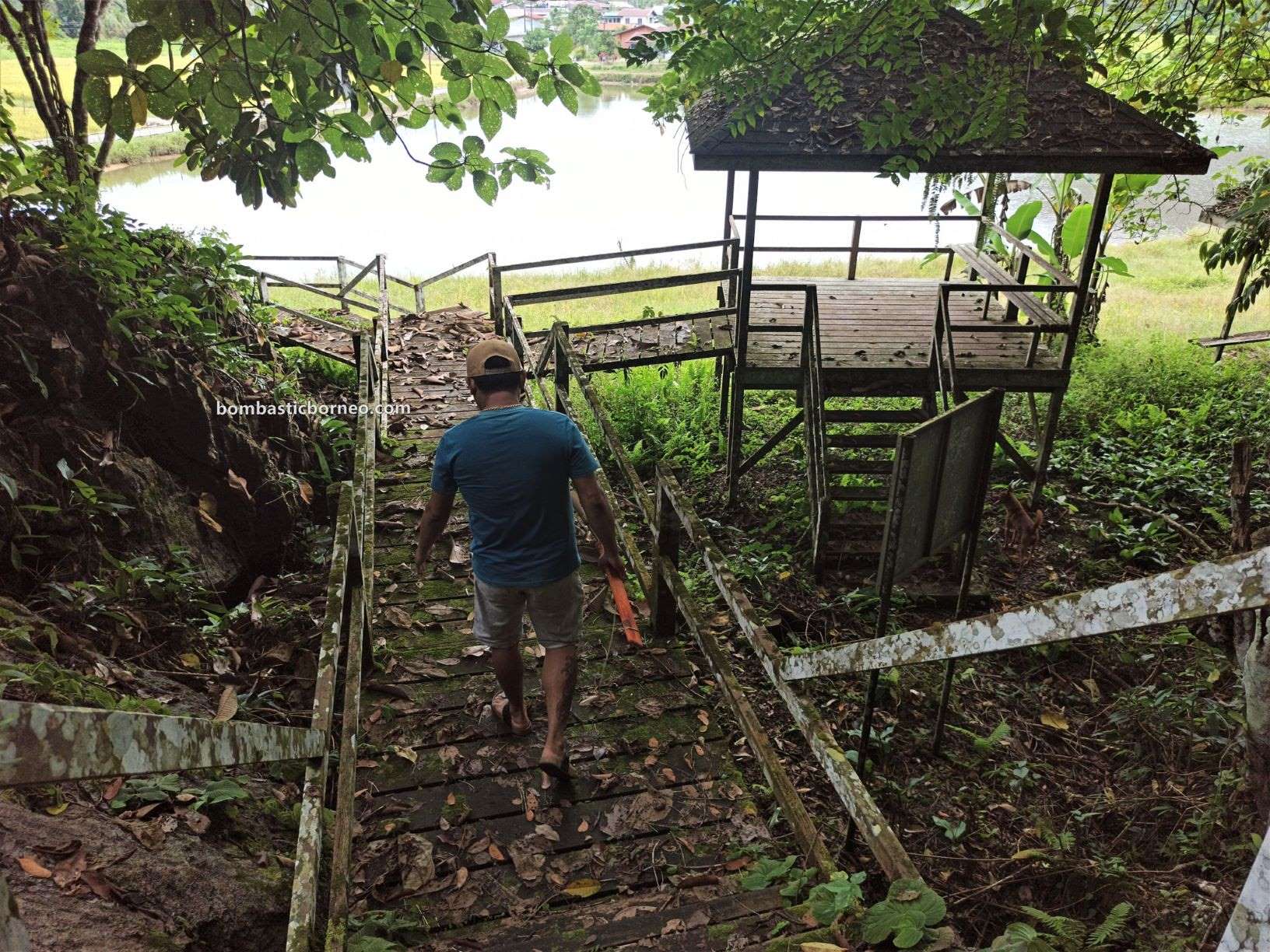 Spent the whole afternoon chatting with Gerald and his father in law Kimi. Through Kimi we learned that Chupak villagers migrated from Kampung Gayu when farming land ran short. Chupak later split further to Payang and Skuduk.

All traditional rituals and customs stopped at Chupak about fifteen years ago. There are now no signs of the old Bidayuh culture except for a wooden altar at the entrance of village. We took a look inside and saw a triangle piece of rock.

The story was one stormy night the rock flew from the mountain and landed on the bamboo deck or tanju of Kimi’s grandad’s longhouse in Chupak. There is no longhouse here anymore. Too bad we were a little late. If you want to hear more old stories of Chupak do talk to Kimi who is an interesting character.

While Bakelalan paddy farmers are struggling with the latest organic technique called SRI, Kimi innovated his own style of yield intensification by doing away with the usual method of nursery and transferring the seedlings to the fields which is a back breaking job. Instead he used a blower to spray the seeds direct onto his tilled field and flooded the field to protect the seeds as they slowly sprout. Kimi bragged that his field was so bushy and thick that walking across it was like walking through a wall! That’s the type of employee Jack Ma is interested in his team! Quick and simple way to get maximum result!

Well, we shall be back to Chupak soon to gauge the yield as compared to more conventional methods. Wait for our next visit and report. Meantime the sun came out again and the air was getting a lot warmer. We decided to try the drone again. The lens was fine at last and the footage satisfactory. Next………….harvesting in Chupak.