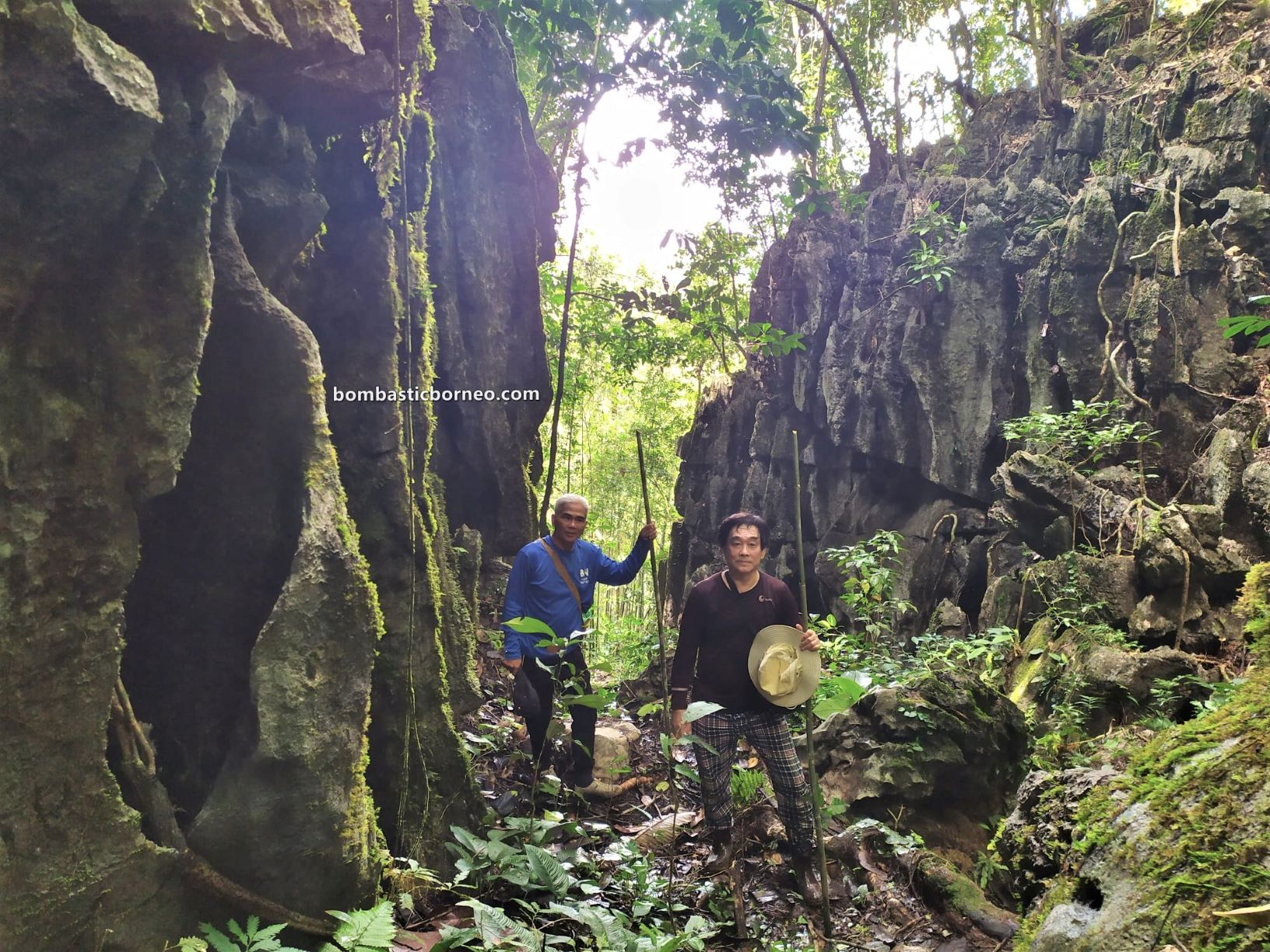 Sometime in early 2020 I bumped into Janek an old acquaintance who 10 years ago guided us to some waterfalls near Kampung Serumah a split away village of the original Kampung Gayu. 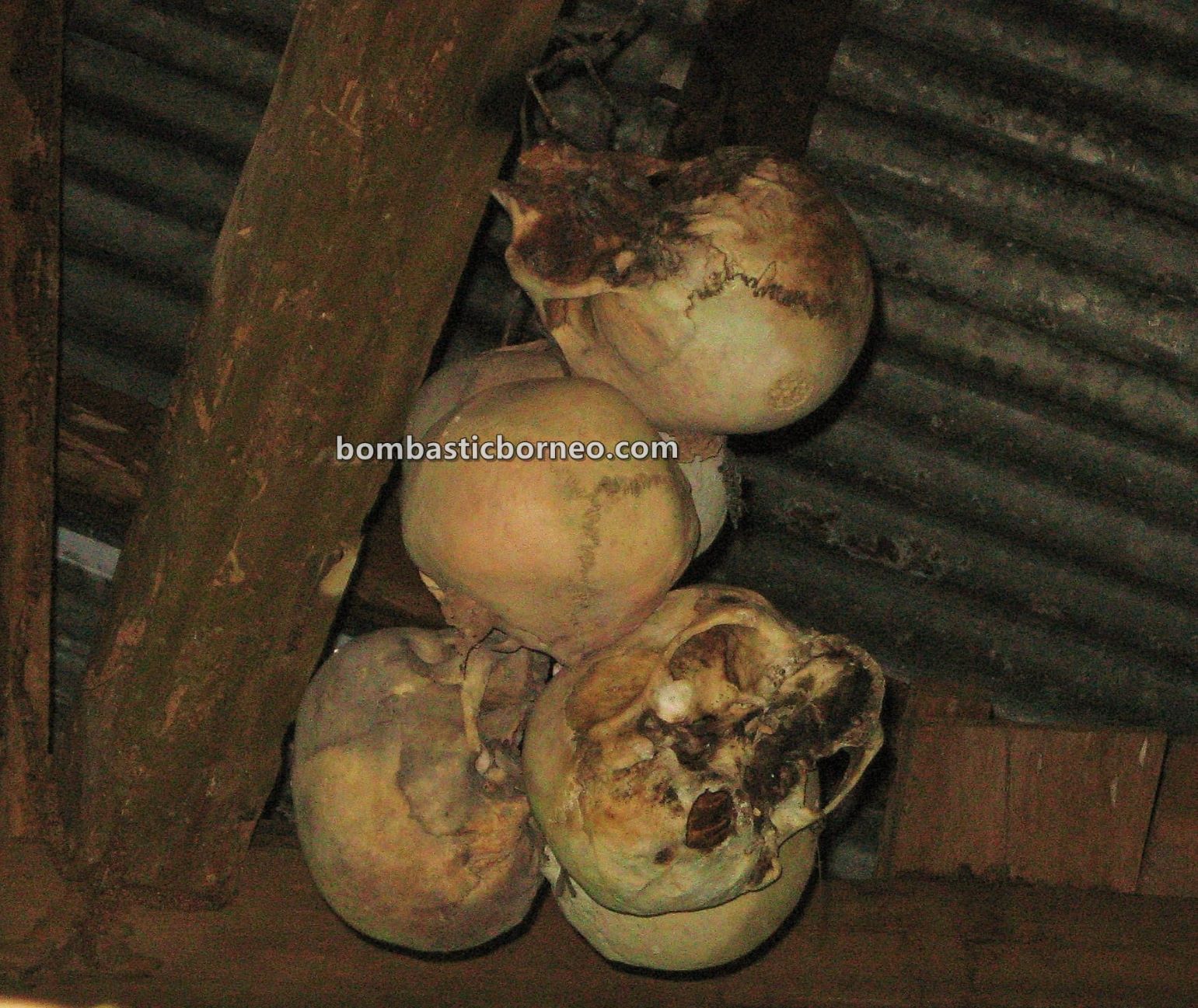 The subject of hiking was brought up during the course of our conversation. He mentioned a new baruk erected in nearby Kampung Gayu and that got me interested. I requested him to organize another visit and hike. The idea was cancelled when the pandemic forced a lockdown in 2020. However, on the eve of 2021 I received a call from Janek asking if we could visit him at his village the next day. The village headman’s condition was there must be no large group which was fine as we had always preferred privacy when doing recce trips. 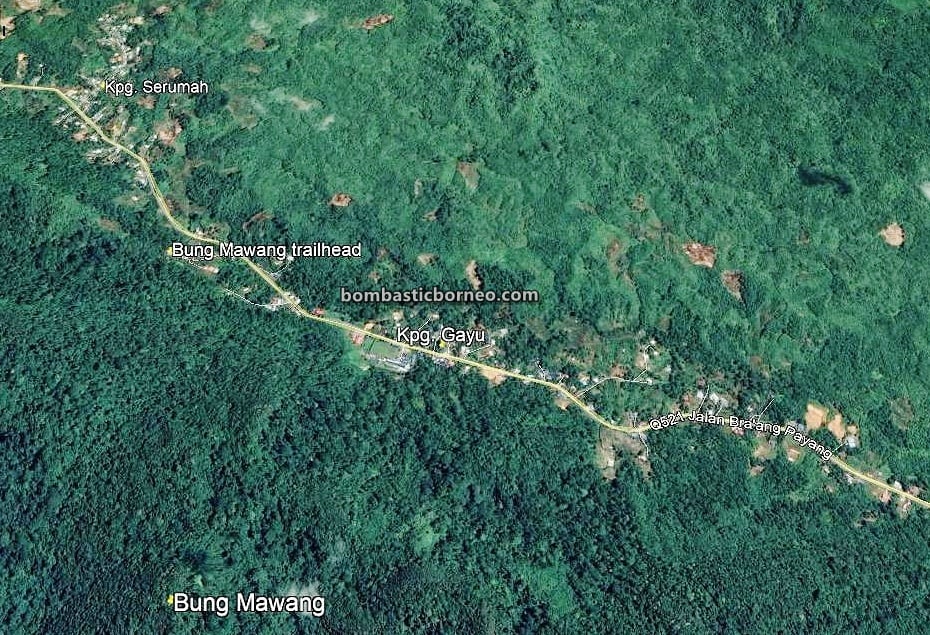 So we met up with Janek at Kedai Runcit Roy a convenience store at Bra’ang Payang Road otherwise called the Old Padawan Road, situated in between Kampung Serumah and Kampung Gayu. We proceeded by car to the trailhead at Lorong 15 Gayu. At the end of the lane was the newly completed short grey baruk.

After all our visits to Kalimantan and seeing their baruks, this was unimpressive to say the least. A far cry from its majestic past but a good and honest try compared to other Bidayuh villages in both Padawan and Bau where baruks have completely disappeared or allowed to rot without the slightest interest in maintaining them.

Gayu’s new baruk was just a dwarf replica to stow away artifacts or even skulls of the old culture of the Bidayuh tribe. The old Bidayuh religion has been slowly dying in most parts of Bau and Padawan. Unlike their counterparts in Kalimantan where tribal pride is still strong and the line distinctly drawn separating their culture and Christian faith as could be witnessed in their annual Gawai Nyobeng festivals.
According to Janek, the opening of this new baruk could not be officiated yet as there are no more qualified elders or ‘Ketua Adat’ who could perform the necessary ritual.
Years ago, the late Dr Patau Rubis when setting up a new baruk in Krokong, had the same issue but because of his close relationship with Kampung Gumbang, he was able to engage the service of their Ketua Adat Mr Anyan to perform the installation of the skulls. So did new Kampung Semban recently at their new baruk at Bengoh Resettlement Site near Semadang. Very genuine and honest efforts from these elders Dr Patau and Mr Sagen who tried their best to preserve the old culture. Unfortunately, on both occasions, their efforts were not reflected with the same enthusiasm from their fellow villagers. Most never turned up and some just peeked from afar. Or maybe it was due to fear of the backlash from the spirits if procedures were not executed to the specs of the spirits. Generally, whether in Kalimantan or Sarawak, the Bidayuh gods or as they call ‘Kamang’ are very strict and all offerings must conform to the Kamangs’ standards that only their Ketua Adat know best otherwise the villagers could be punished by sickness, poor harvest, famine or even death.
Since we were there, we took a short drone video of the baruk anyway. That done, Janek suggested that we proceeded to the summit of Bung Mawang the spot where the original longhouse of Kampung Gayu once stood centuries ago.

The whole morning’s weather was perfect. The sun was out and shinning but not a ray of sunbeam passed through the thick foliage thanks to all the huge trees shading the trail. The hike ascended from step number one right up to the peak. There was no time for warming up. The long layoff from uphill hiking was taxing on the knees. Along the way our guide Janek would narrate his many childhood stories and after about half an hour we reached a spot called Tiang Badak lined by 15m tall vertical limestone walls on both sides of the trail. Looking back, this was the most captivating and memorable part of the trail. A lovely ancient trail through a magnificent limestone ravine. The cool breeze rushing up through the ravine was comforting indeed. Well shaded plus a breeze, a 5 Star trail. 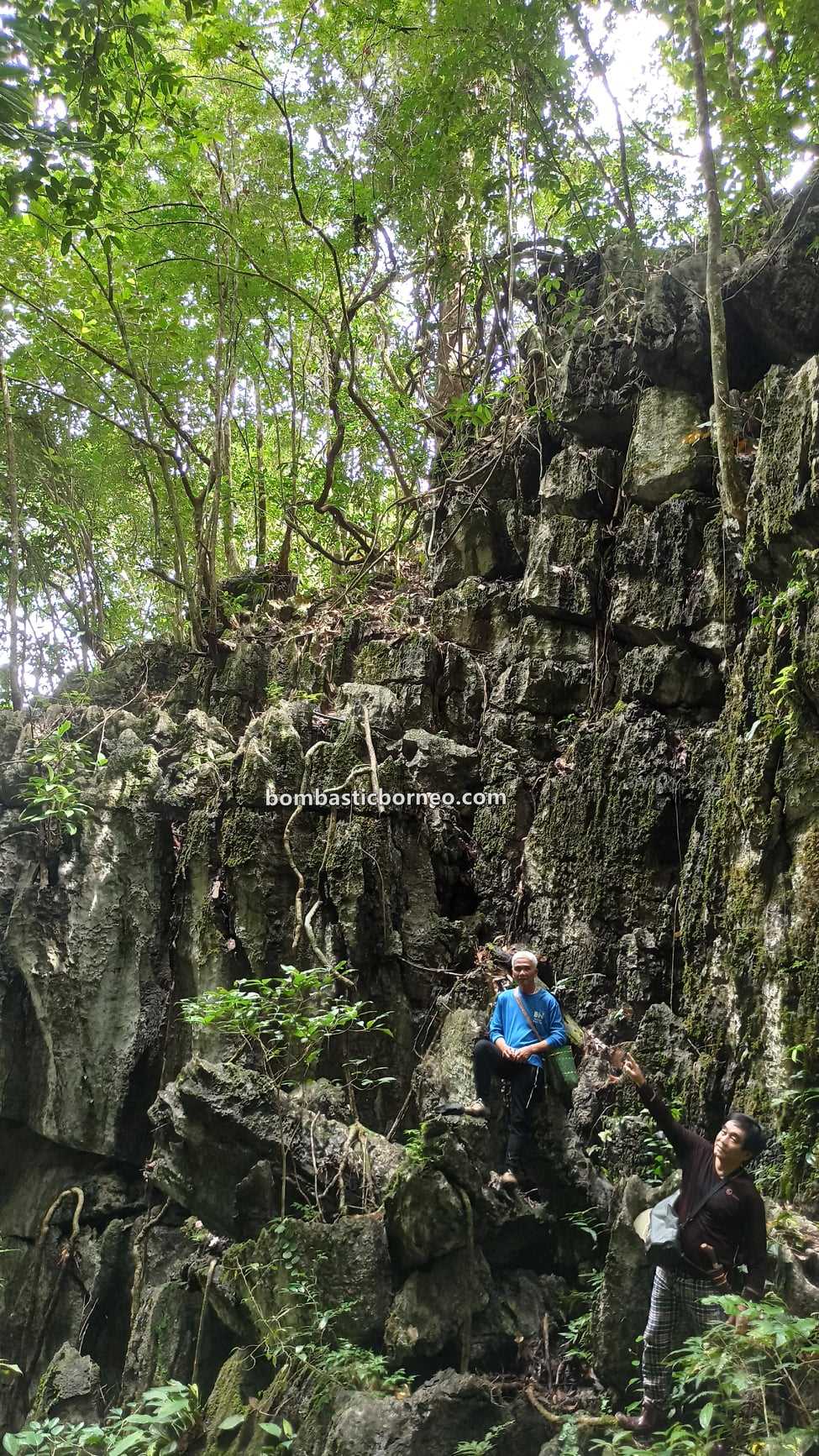 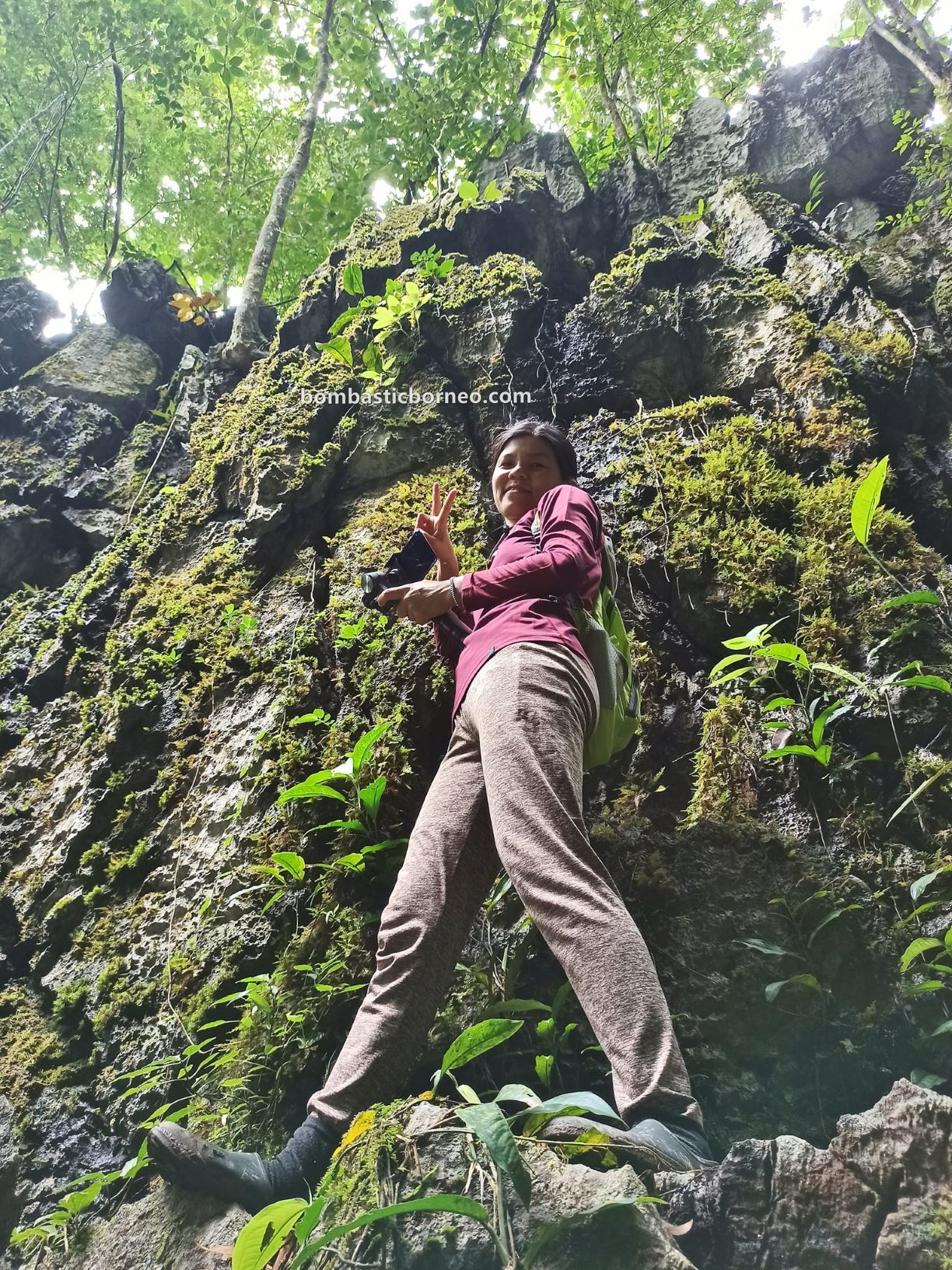 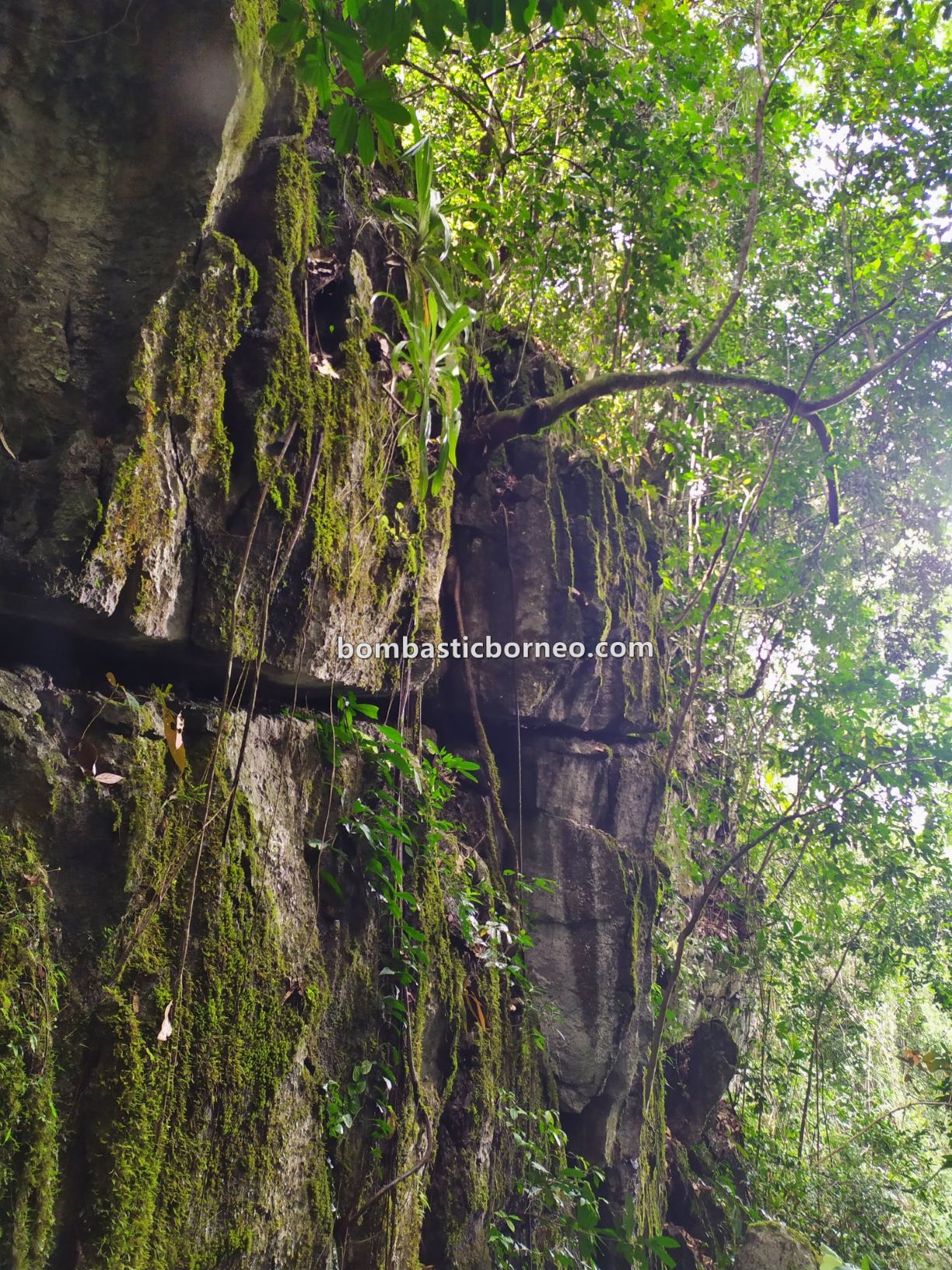 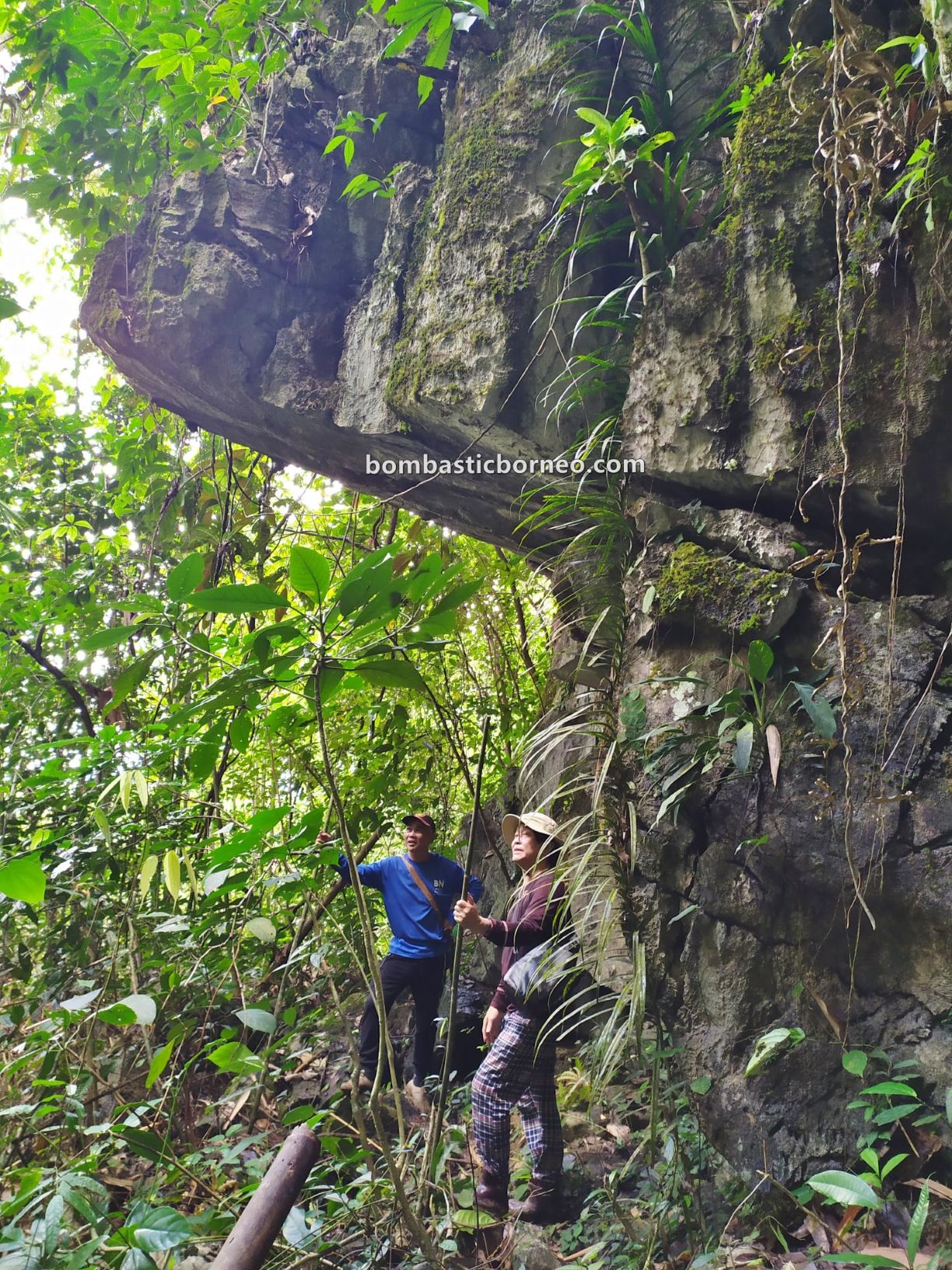 Finally, we decided to do our first pitstop at a spot called Pekan Neriet. Furnished with some ancient limestone stools we sat there to listen to more Janek stories about the past as told by his grandfather. He recalled how Gumbang villagers from Bau would regularly conduct raids on Kampung Gayu in the old days of headhunting. Never knew our friends in Gumbang were such a nasty lot back then!! Sorry bros. Heard the same stories too from other Padawan villages. Gumbang was called Betag back then. 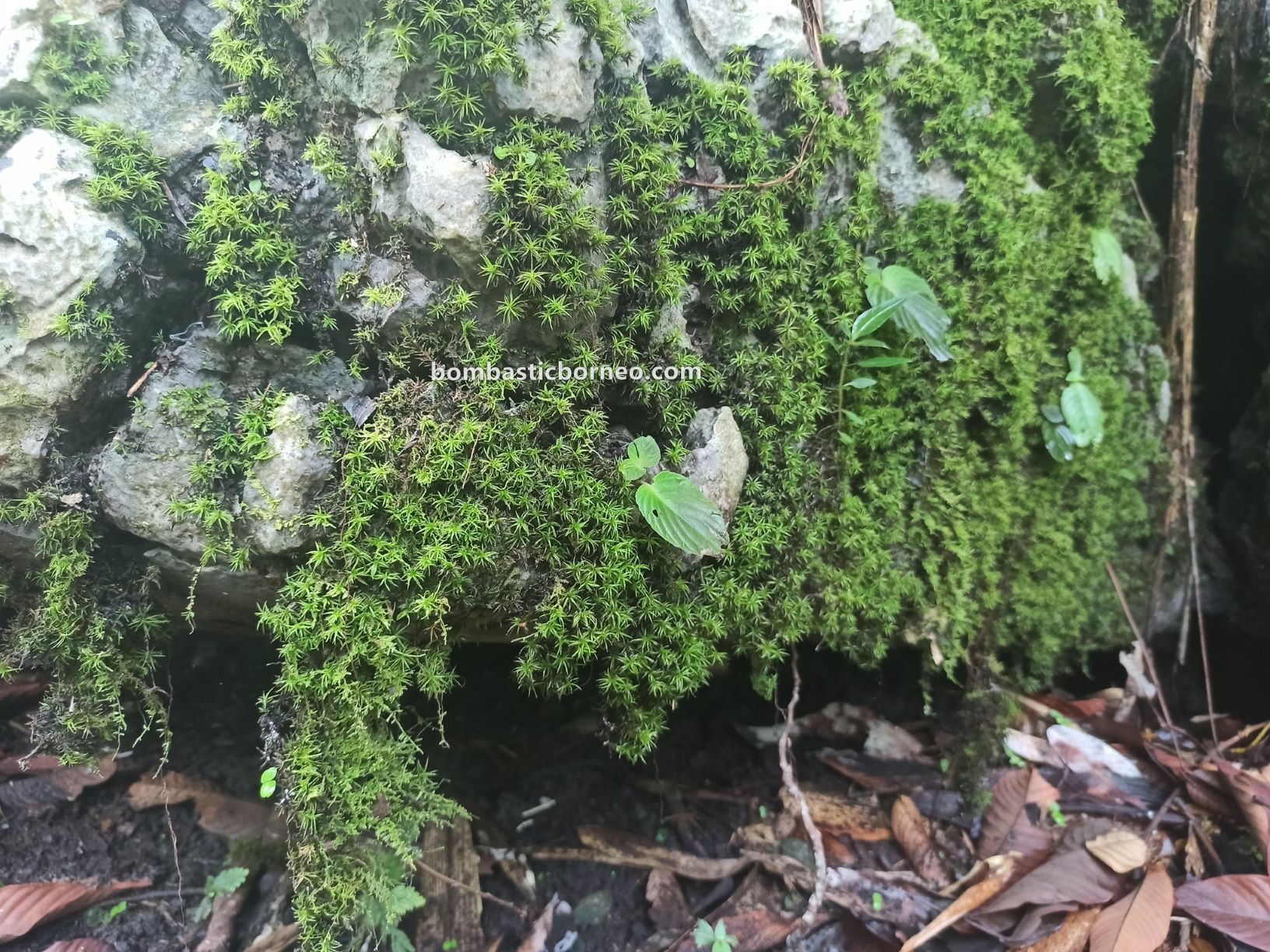 After the 30min break we continued the hike to the peak of Bung Mawang the old spot of the original Kampung Gayu. It took us another 30min passing some gigantic trees with thick bamboos clusters around the old spot. 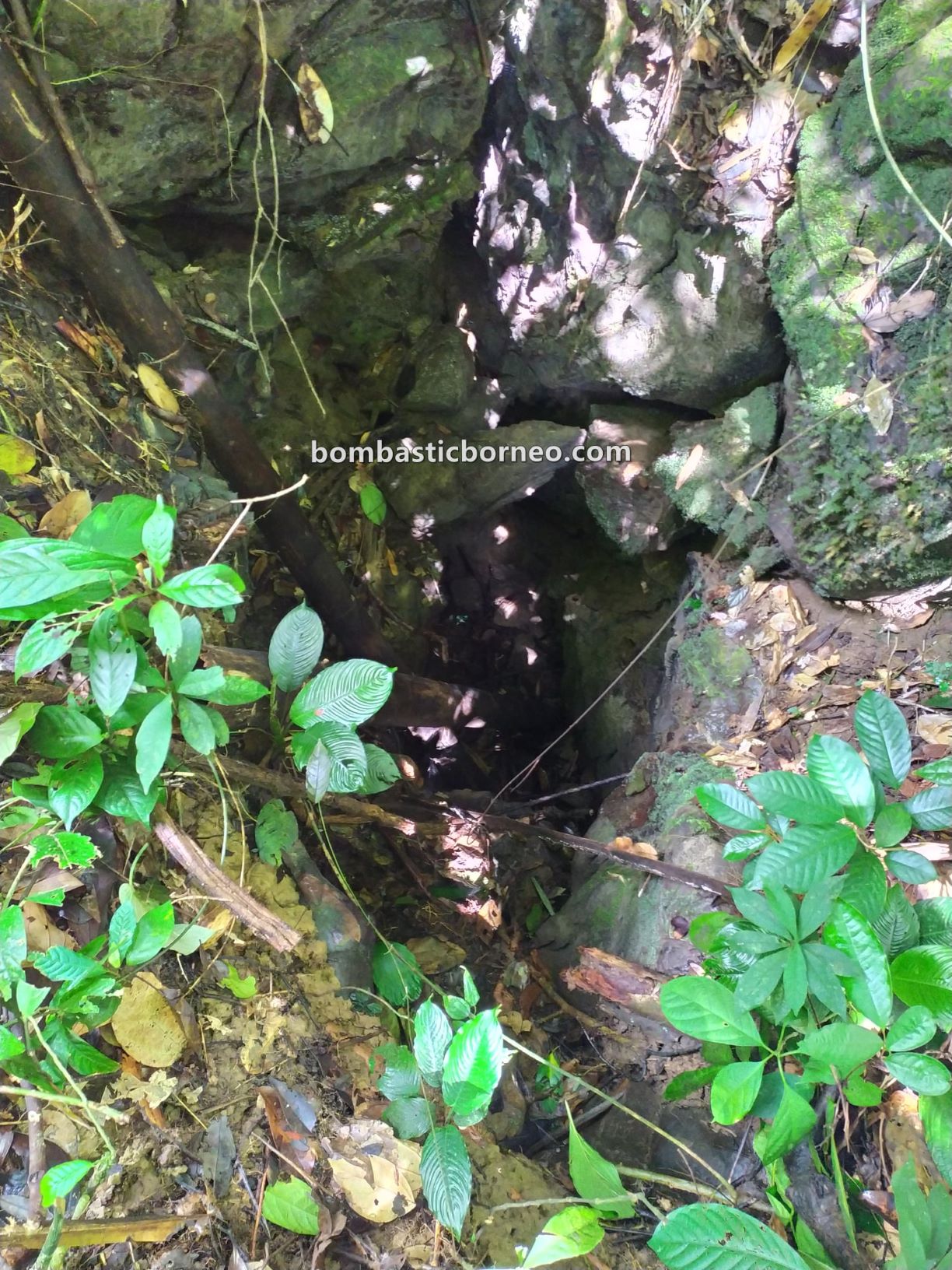 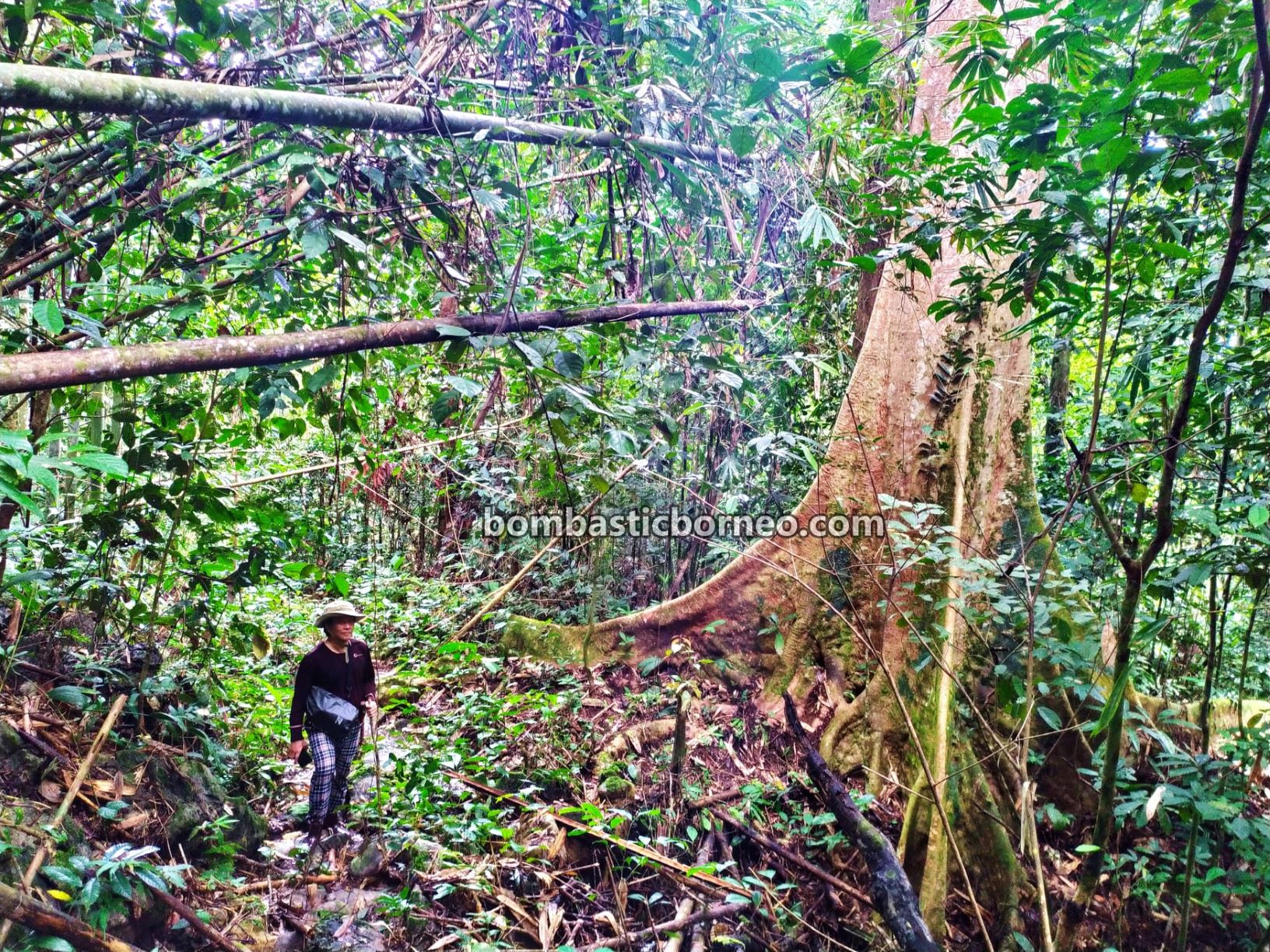 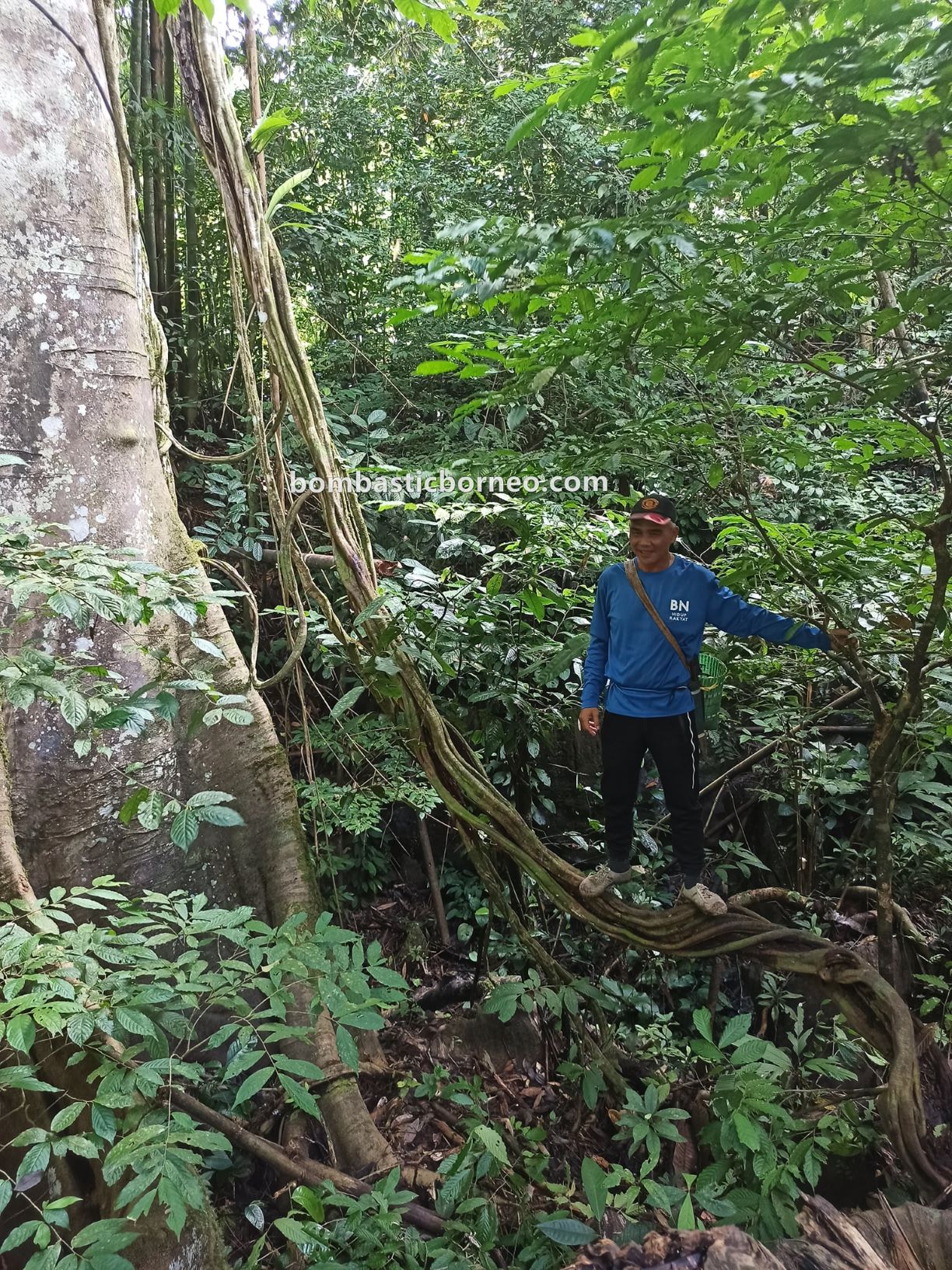 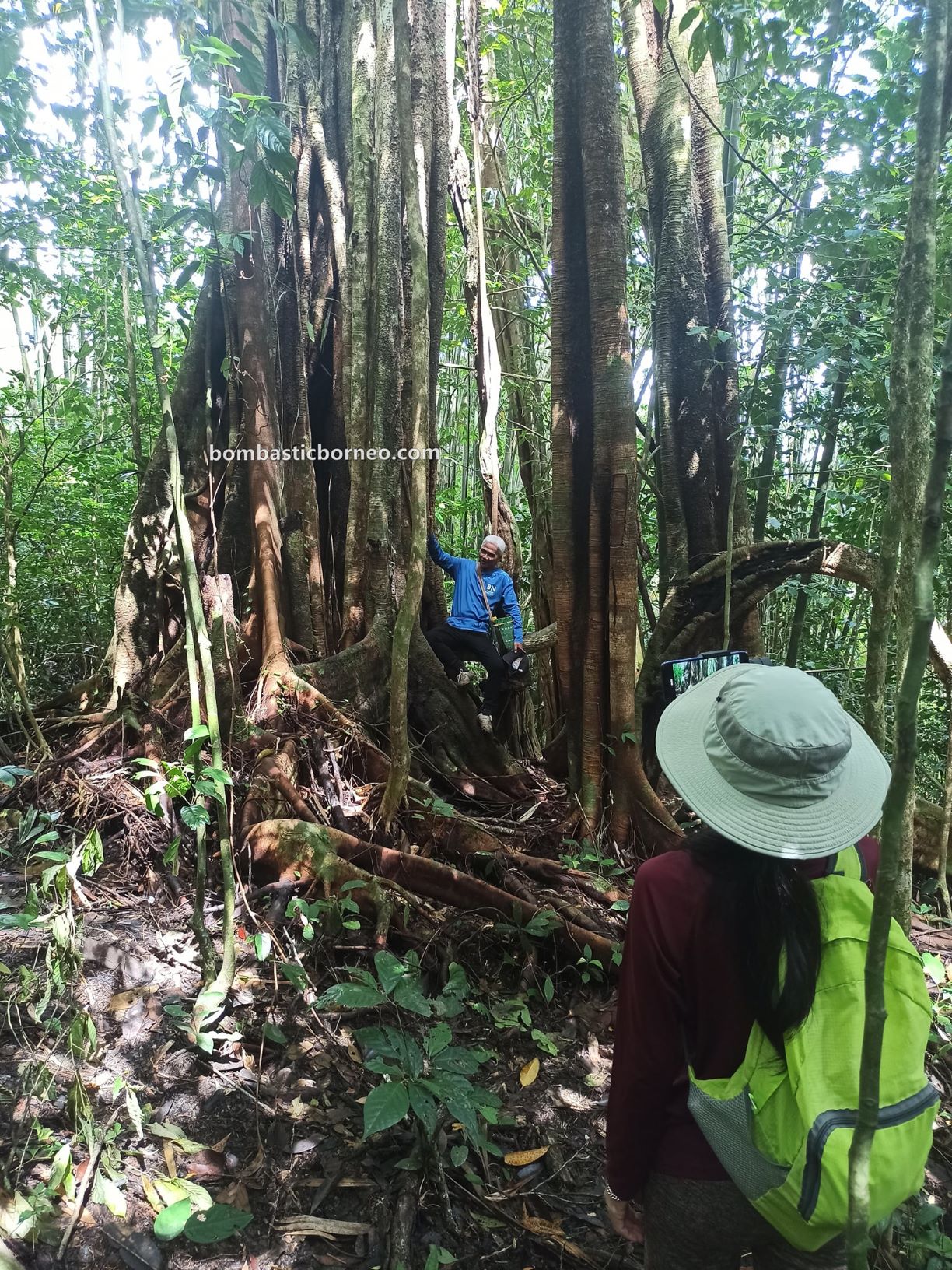 Upon arriving, we found the place with freshly crafted bamboo benches and a traditional cooking place. It must have been a regular resting place for the locals. 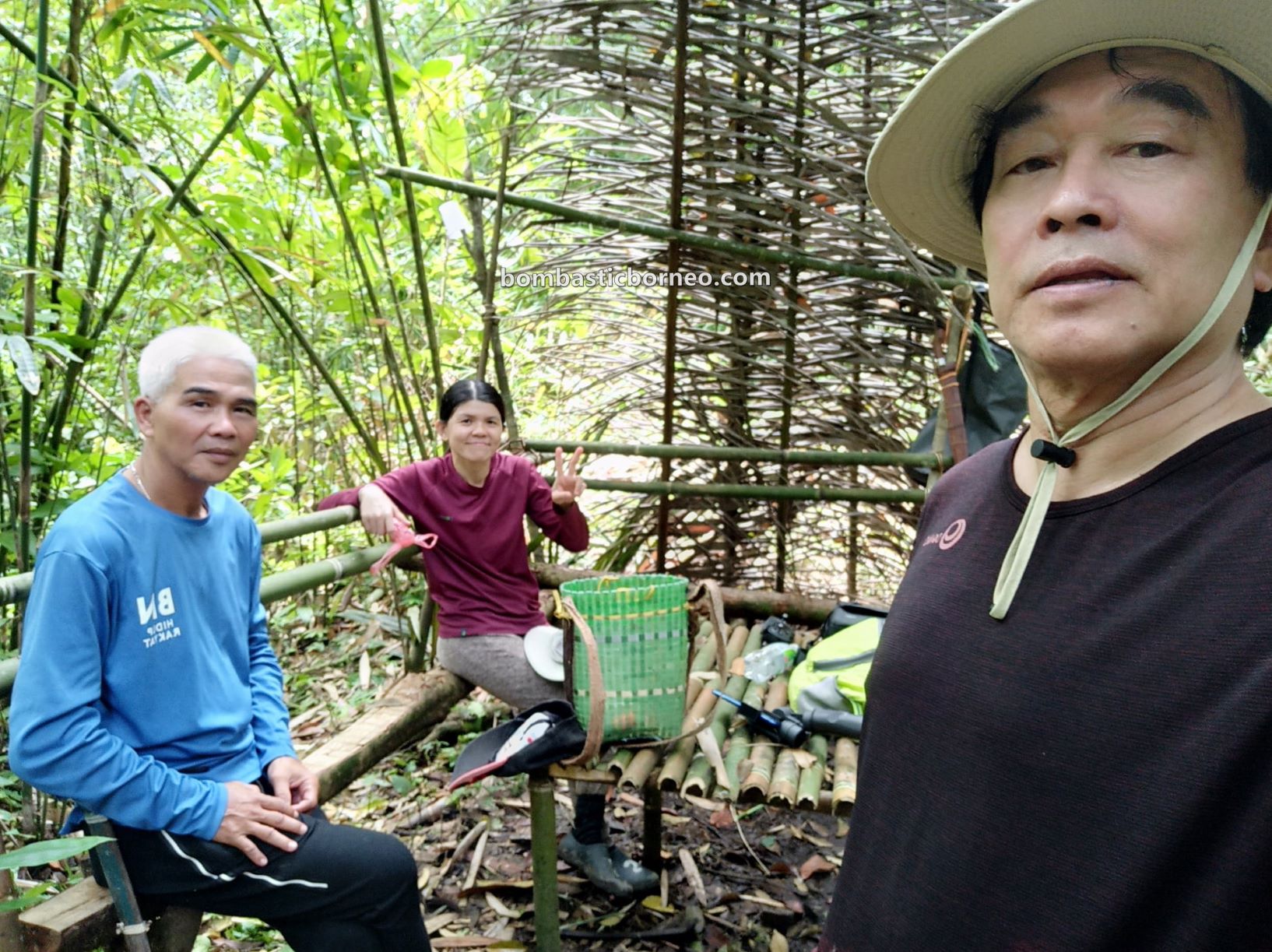 We had some snacks to bite at the comfy bamboo benches and brainstormed for a bit. We agreed that the trail was a little too short but one of the best trails we had hiked in a long time. Tiang Badak ravine was definitely the star attraction. Janek even suggested a simple rock climbing feature be built here while I thought a bamboo tanju at the slope of Pekan Neriet should compliment its natural beauty. A different return route must be created to the waterfalls for a good ending. Before we forget, the numerous amorphophallus we saw at the trailhead could provide a nice welcoming for hikers provided the season is right.
With some creative value adding to spice up this joint Gayu/Serumah package there is no reason why this tourism potential could not be a hit with hikers. It has Culture (baruk), History (old longhouse spot), Adventure (rock climbing) and Nature (amorphohallus, tapang trees, giant bamboos and rock creepers).
By the way, in case some of you do not know, Gayu Longhouse used to be a popular tourist attraction until 1990s which I visited once before it was dismantled as the villagers moved out to build their own individual houses along the current locations nearby. Hopefully, with this new joint venture with Kampung Serumah, tourism will make a comeback to these 2 villages. 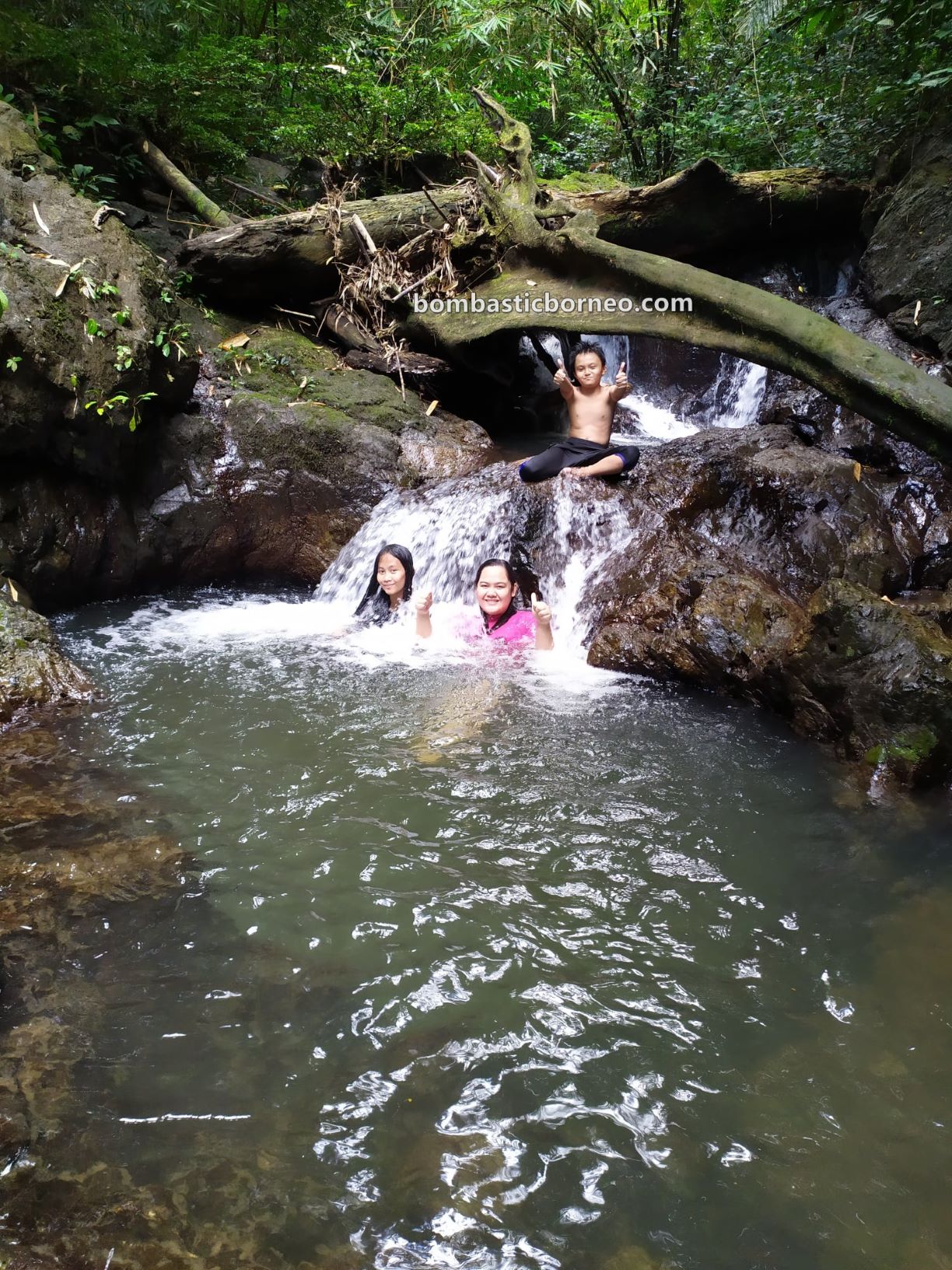