The second day happenings were a lot more interesting due largely to our new friend David whom we bumped into at the wood carving and shield painting competition. He caught our attention because of the unique backpack he was wearing, specially custom made by some villagers producing tree bark products.

After introducing ourselves to each other, David offered to give us a tour of the venue and introduced some of his friends to us. Most of the villagers seemed to know him well.

One of them was an interesting Iban guy who seemed like an expert in Iban tattoo and he complained about how many non Ibans made the mistake of choosing the wrong motifs or putting the motifs in the wrong places on their body. He got very upset when he saw people putting the ‘Bunga Terong’ motifs on other parts of the body other than the shoulders. The worst was when ignorant people used the motif for the cemetery as a tattoo. He got more upset as he ranted along. I believed he meant the ceremonial hornbill carvings that we saw a lot in Dayak cemeteries in the interior of Borneo.

He further explained that the thigh tattoos were only meant for those who had traveled far from their longhouse, perhaps symbolizing that person had seen the outside world. The throat tattoo meant the person had ever taken a head before!

So guys, plan your next tattoo session wisely. Do some homework and best to consult an elderly Iban first. Most tattoo artists do it for the money only and totally ignorant of the meanings, history and culture of the Dayak motifs of Borneo. Rule is ‘right motifs at the right places’.

Our guide David suggested later that we visited (or ngabang) the individual houses at the back of the longhouse where each village was allocated. So there were 15 such ‘district houses’. 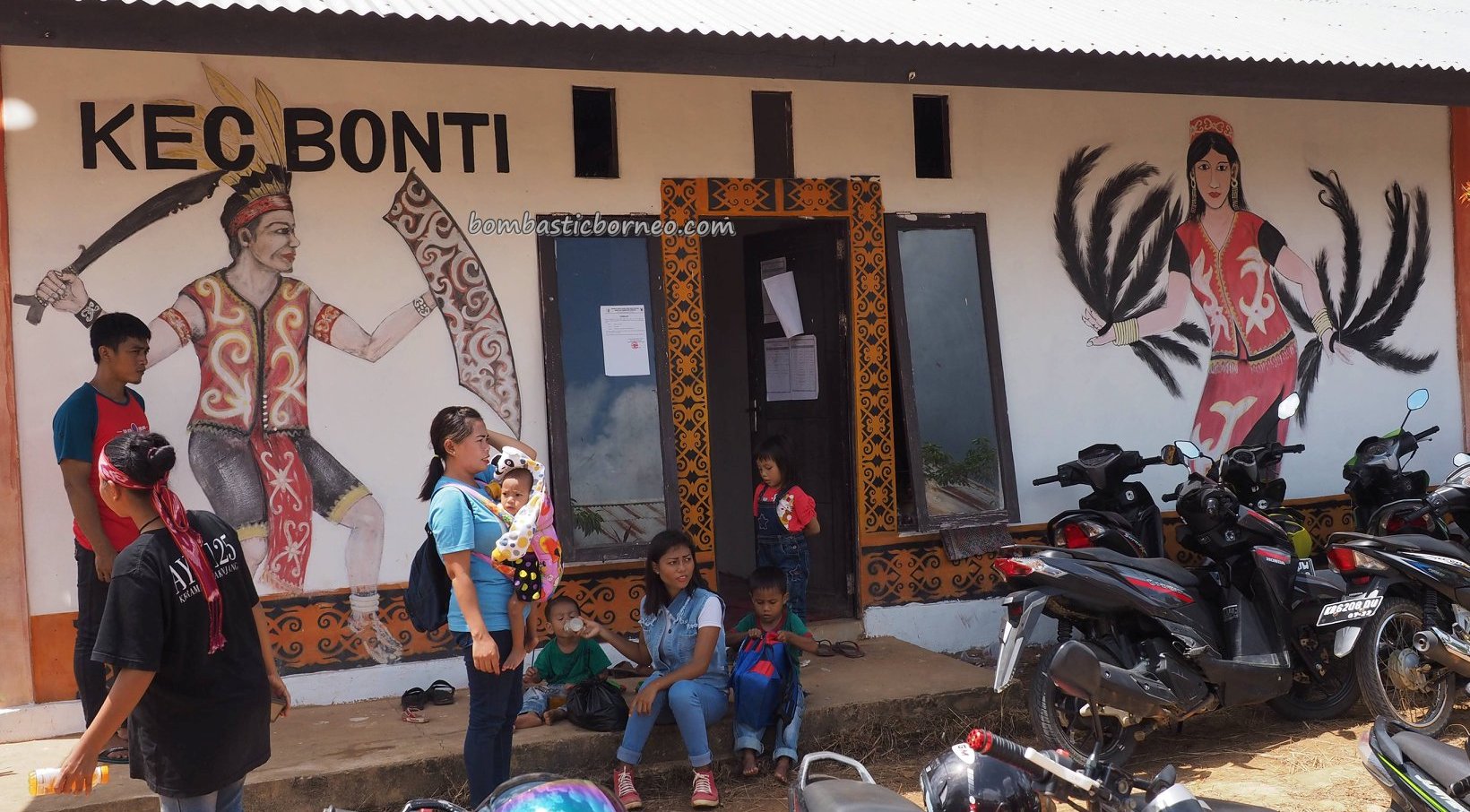 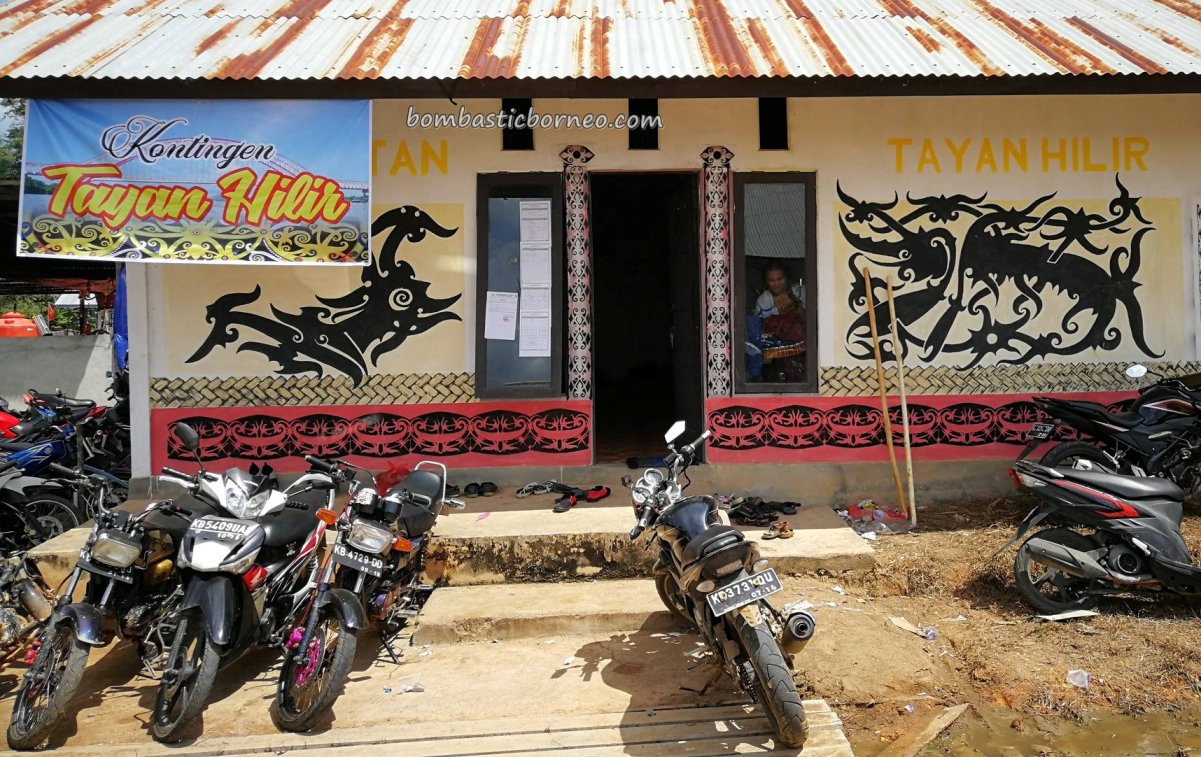 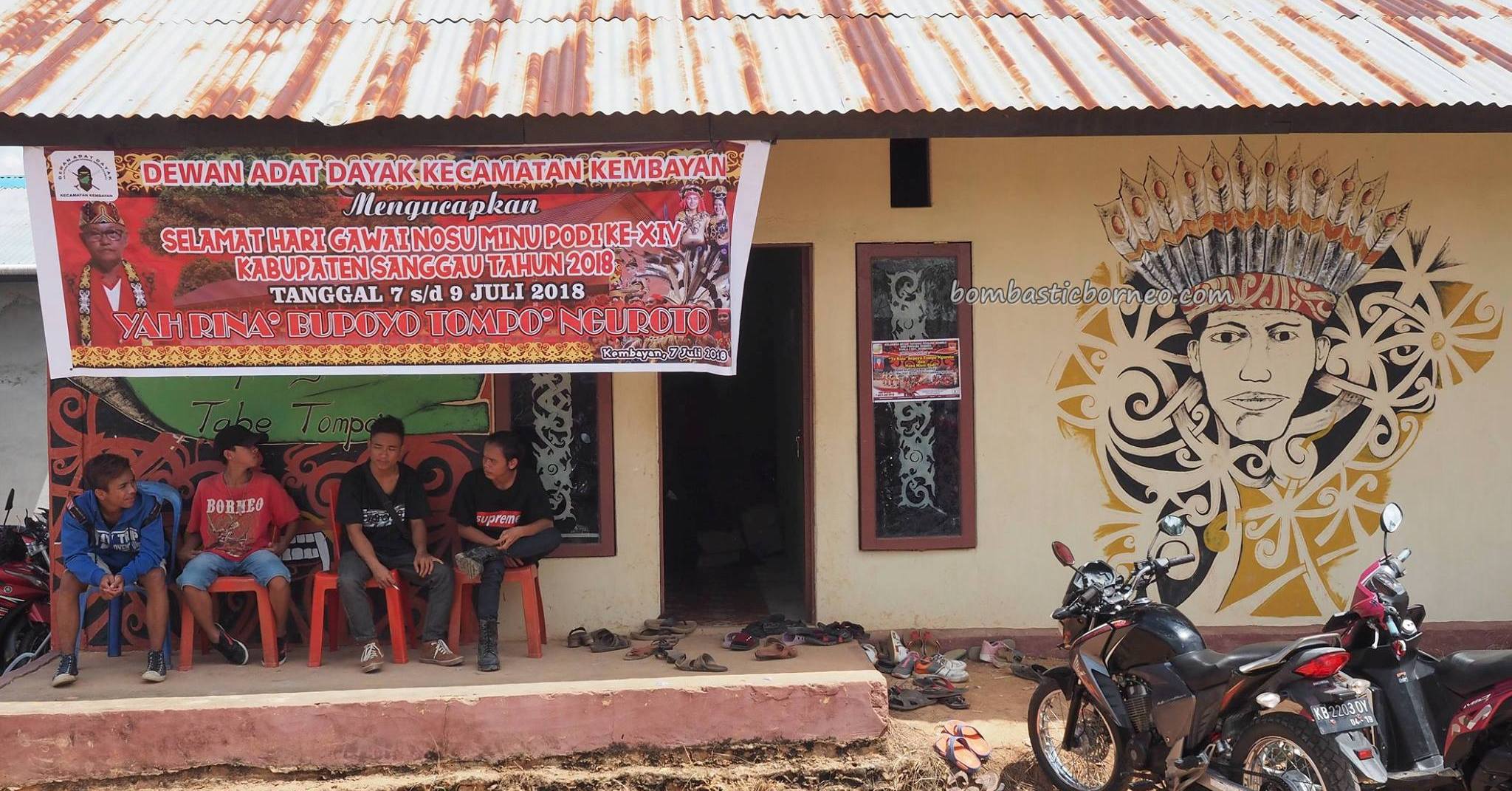 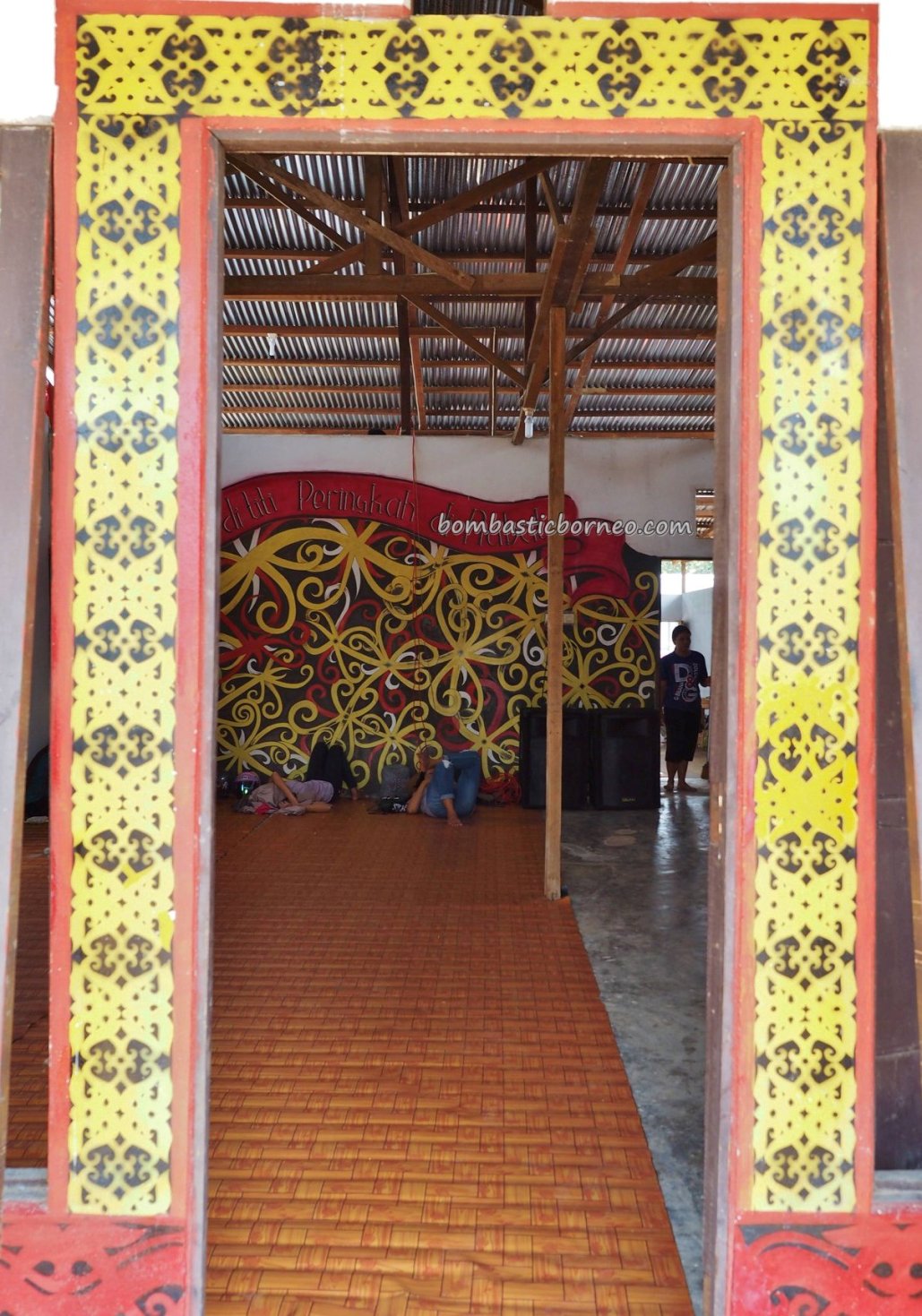 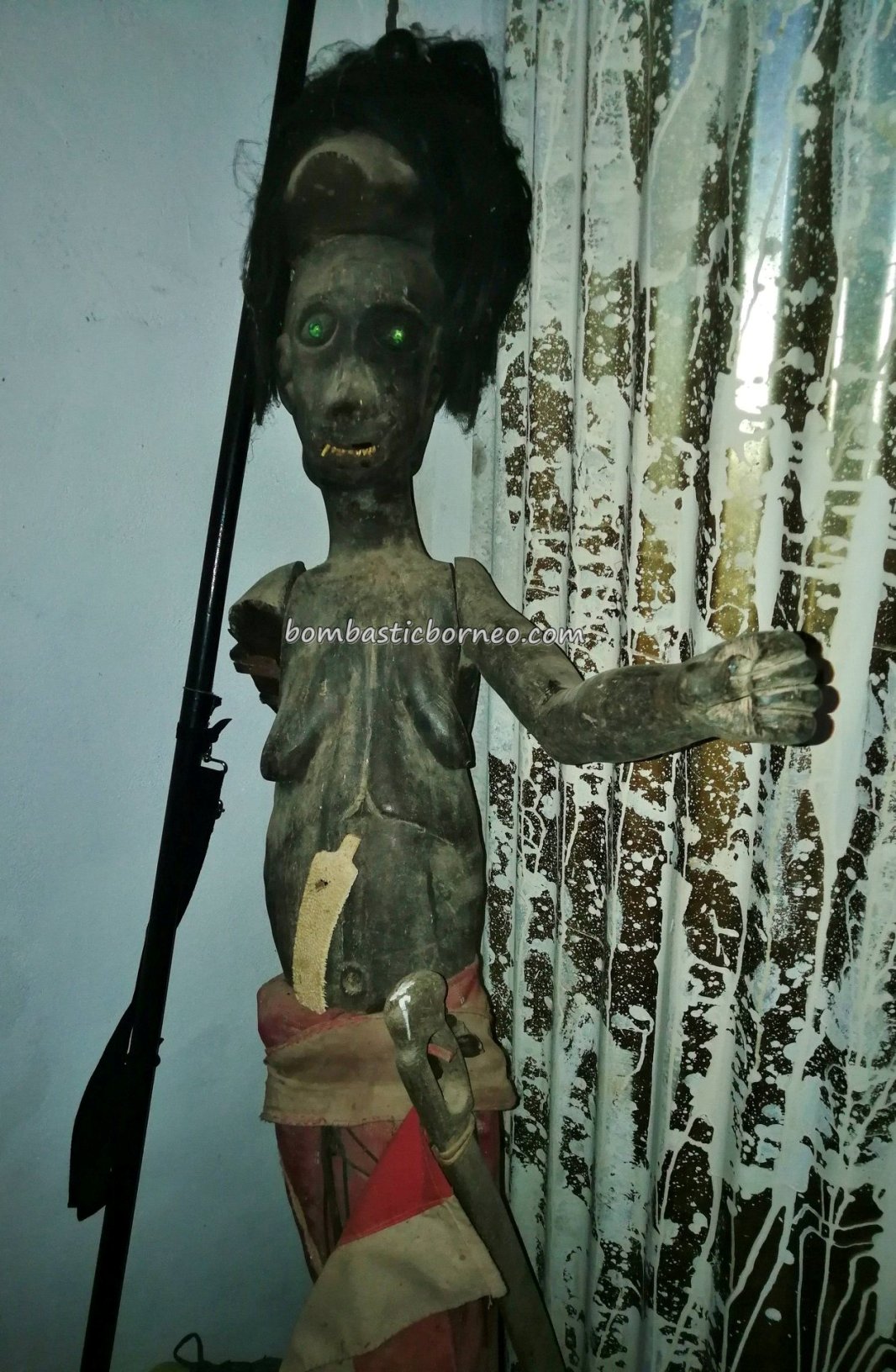 This was where participants stayed over for the Gawai and also did major food preparation and cooking. We were generously offered food in every house we ngabanged but with mostly meat. 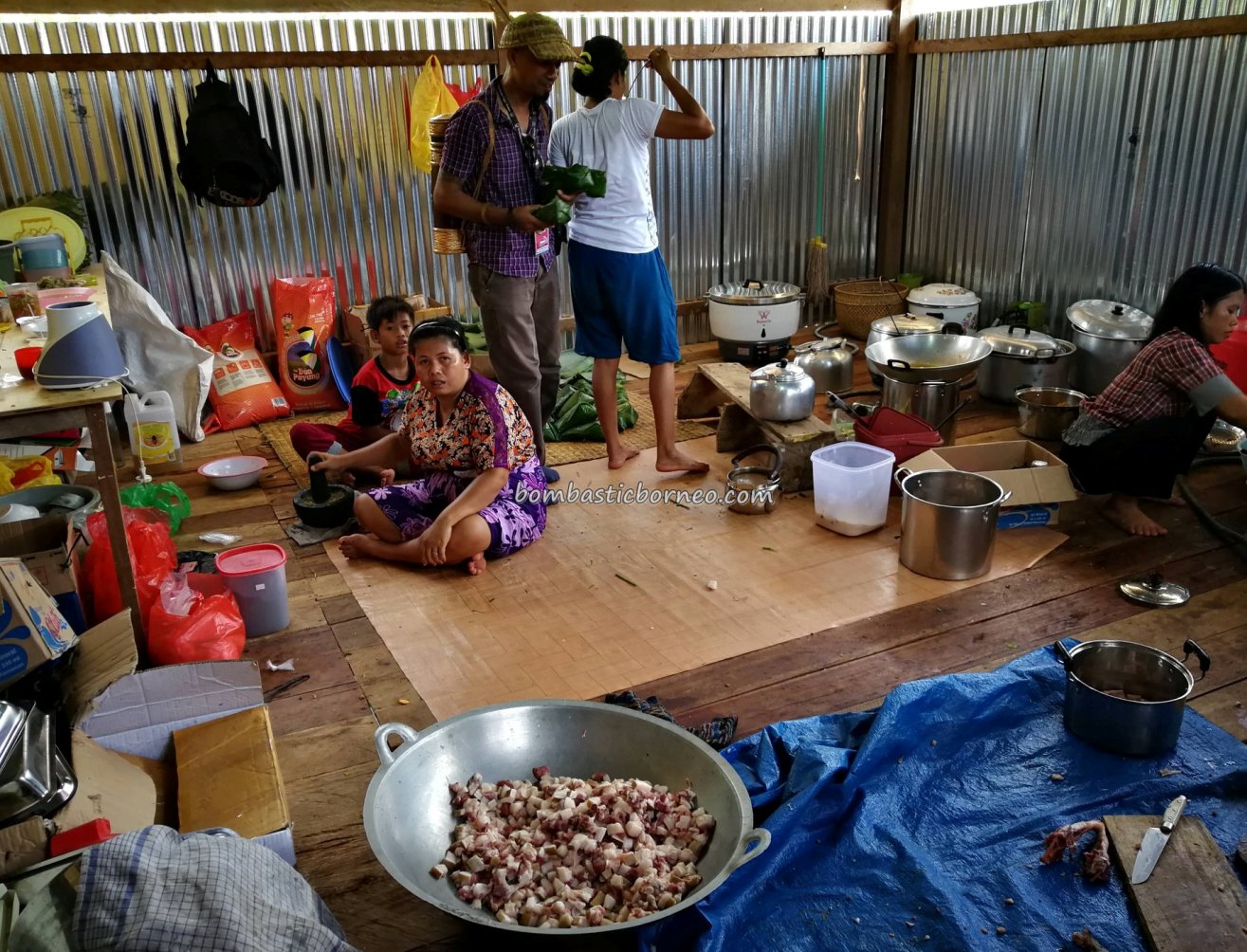 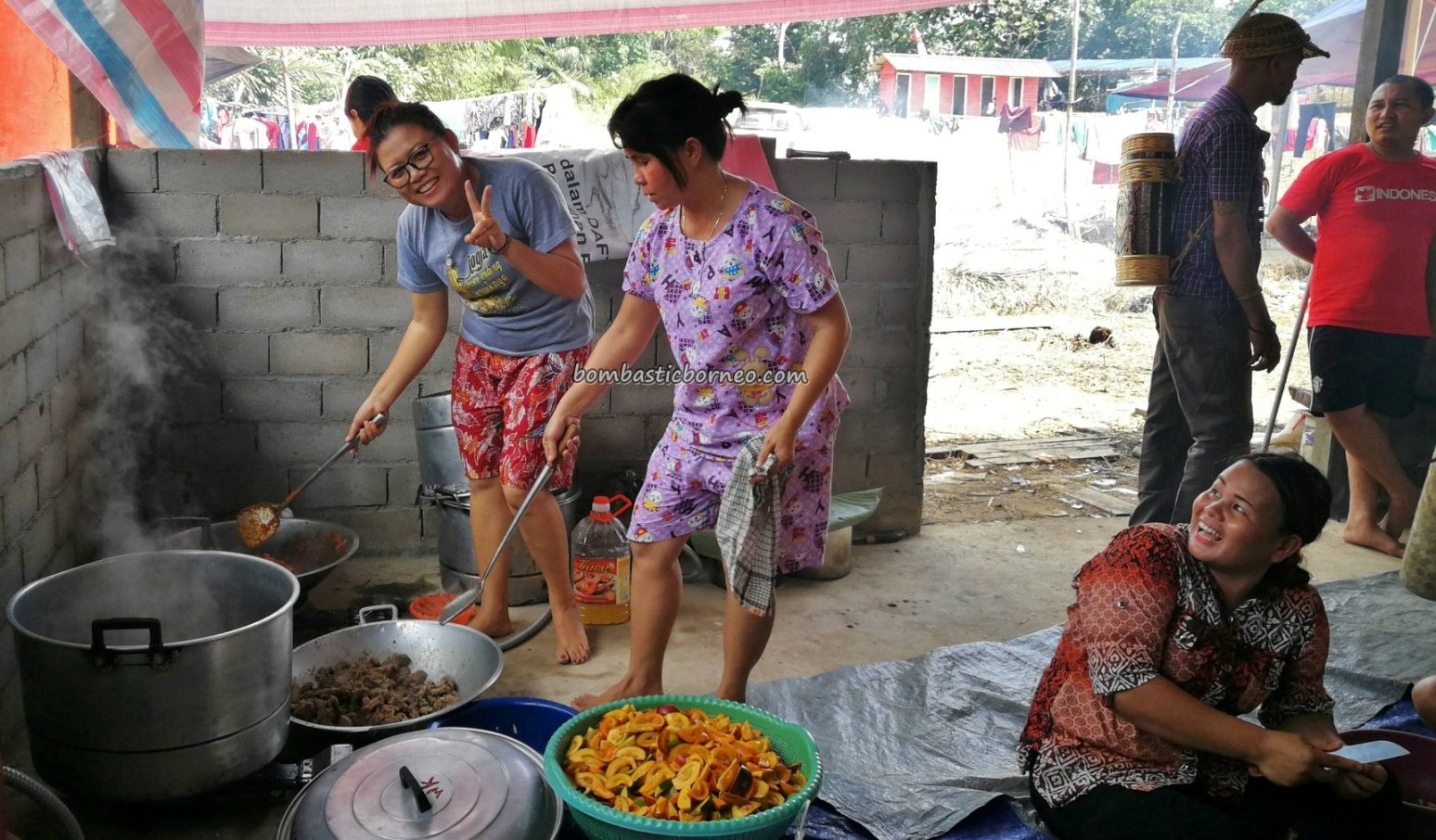 This was where and when we felt the real Gawai spirit where each tribe played their traditional music and sing their traditional songs. Tuak or rice wine flowed freely and everyone started dancing. It was spontaneous, the way Gawai should be celebrated. 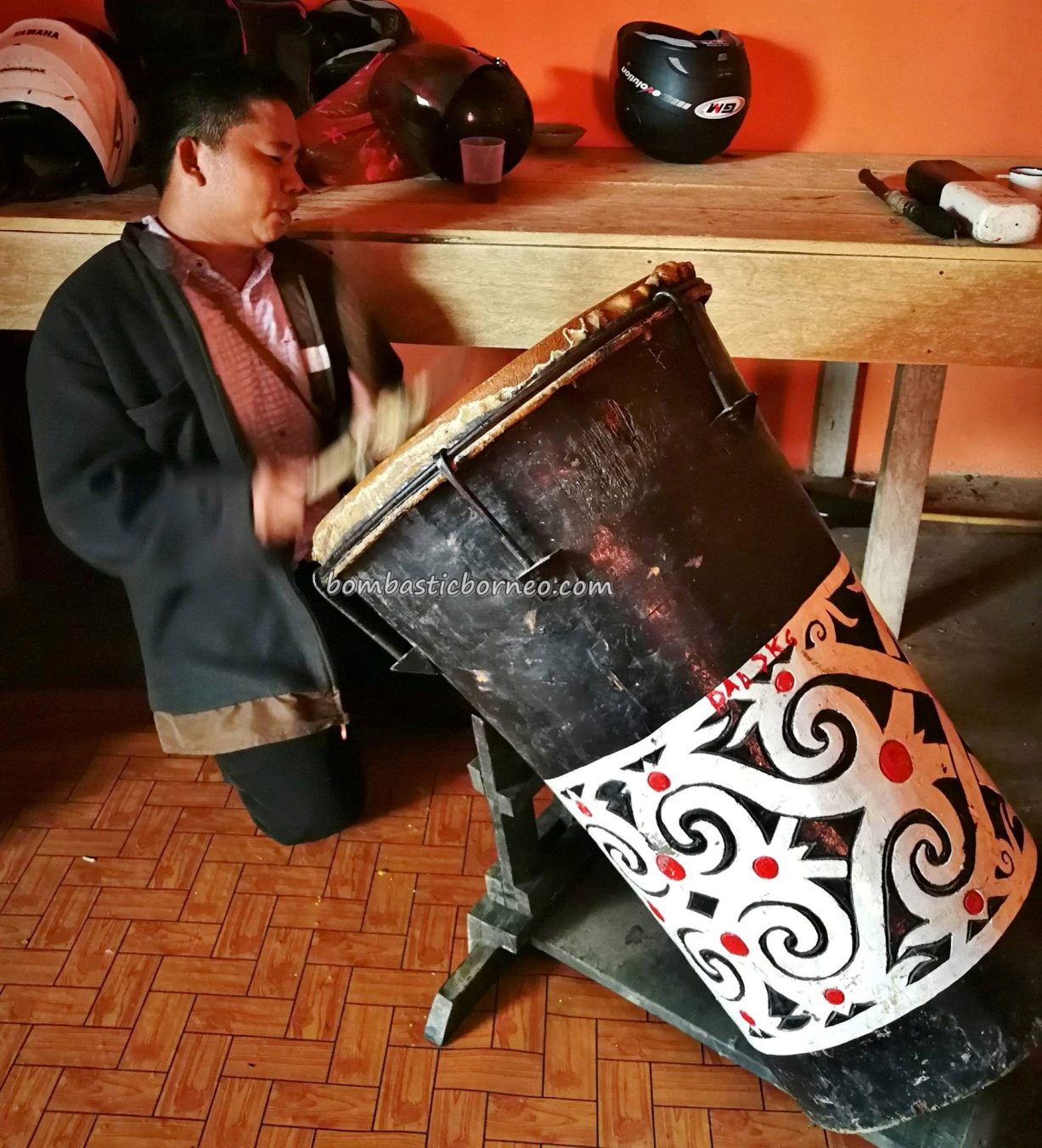 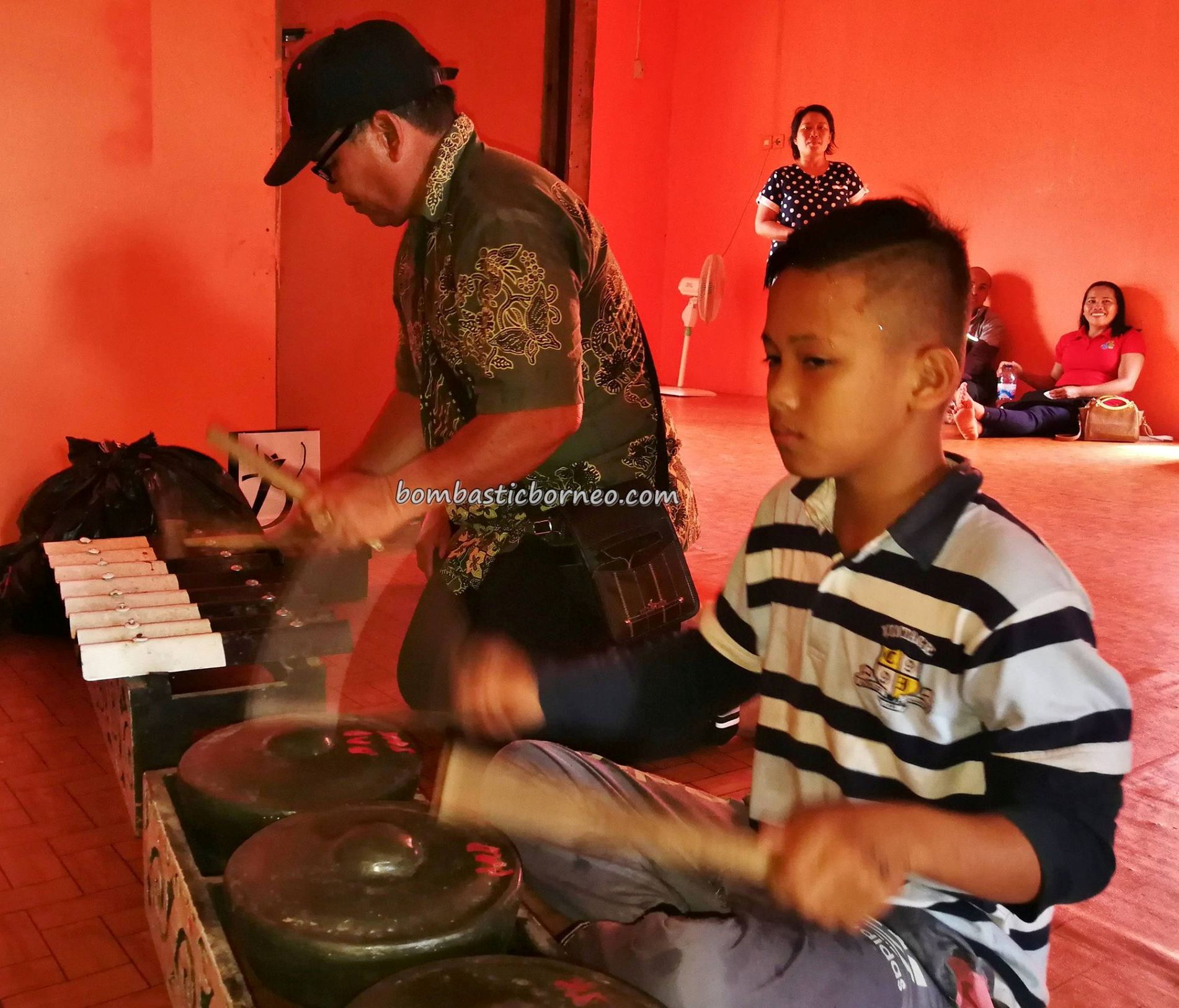 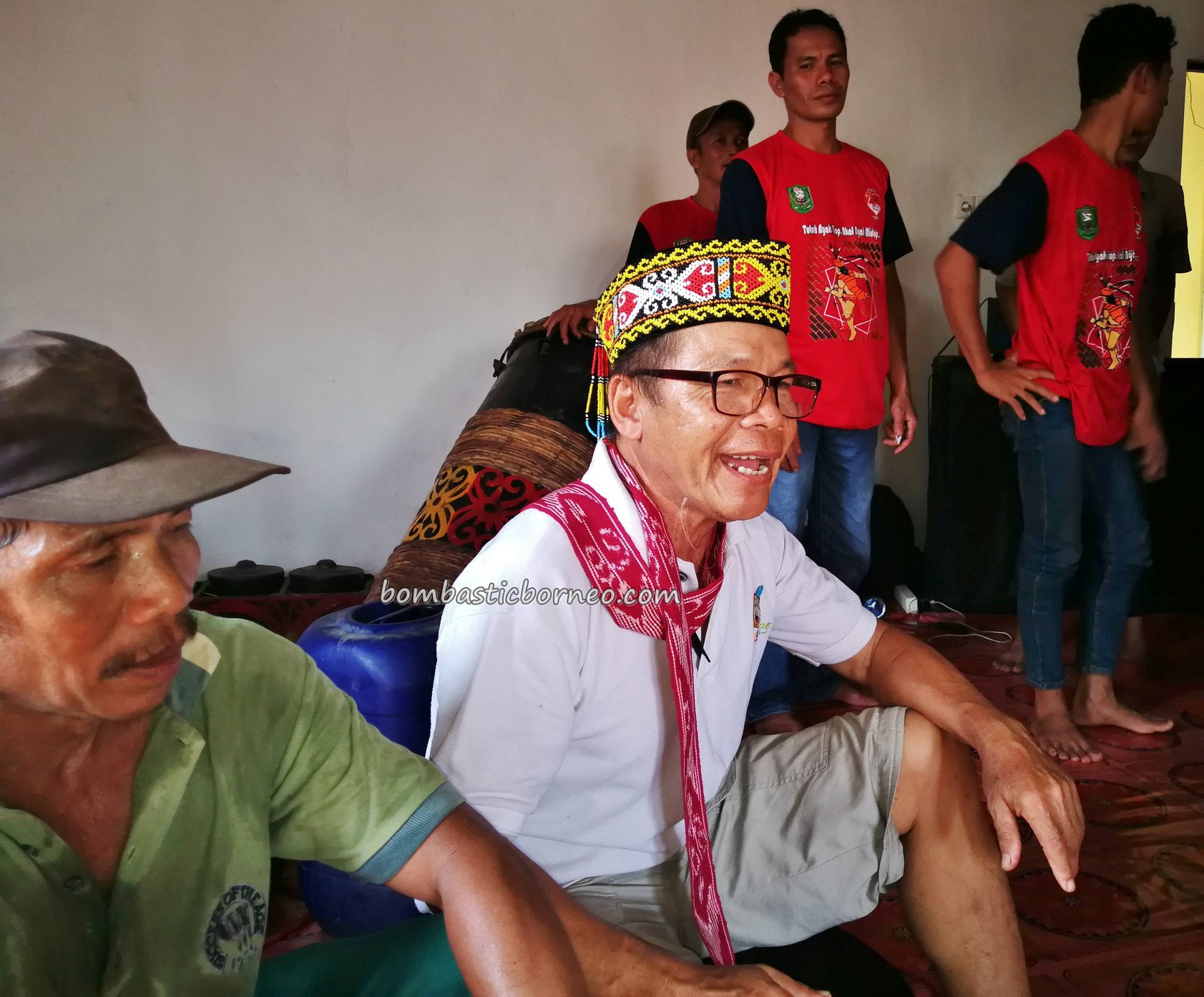 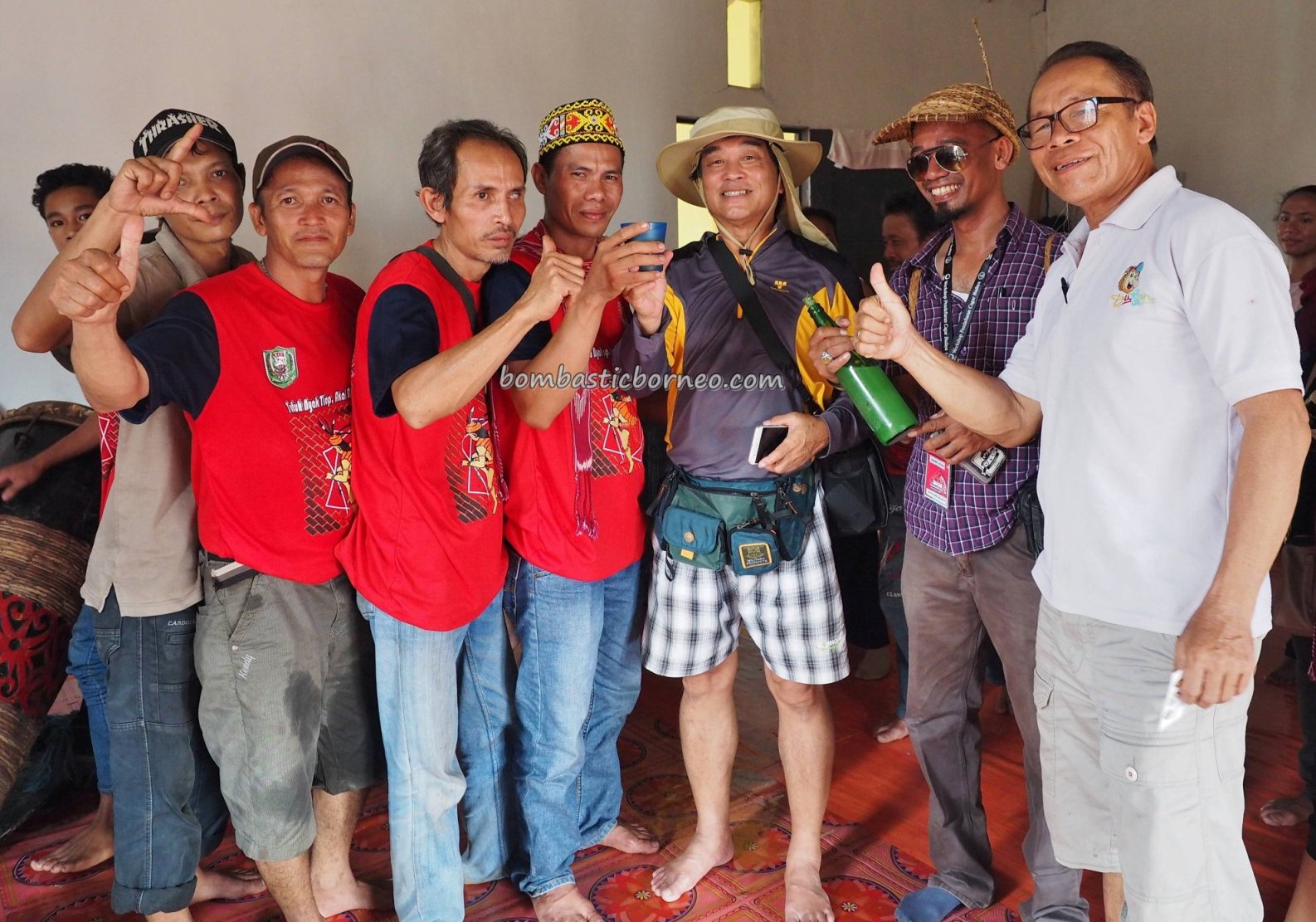 Before we got kicked by the tuak effects we escaped in time to catch the ladies battled it out at the paddy dehusking competition.

It was loud, noisy but seemed very exciting as each team of about five participants pounded away at the lesong. 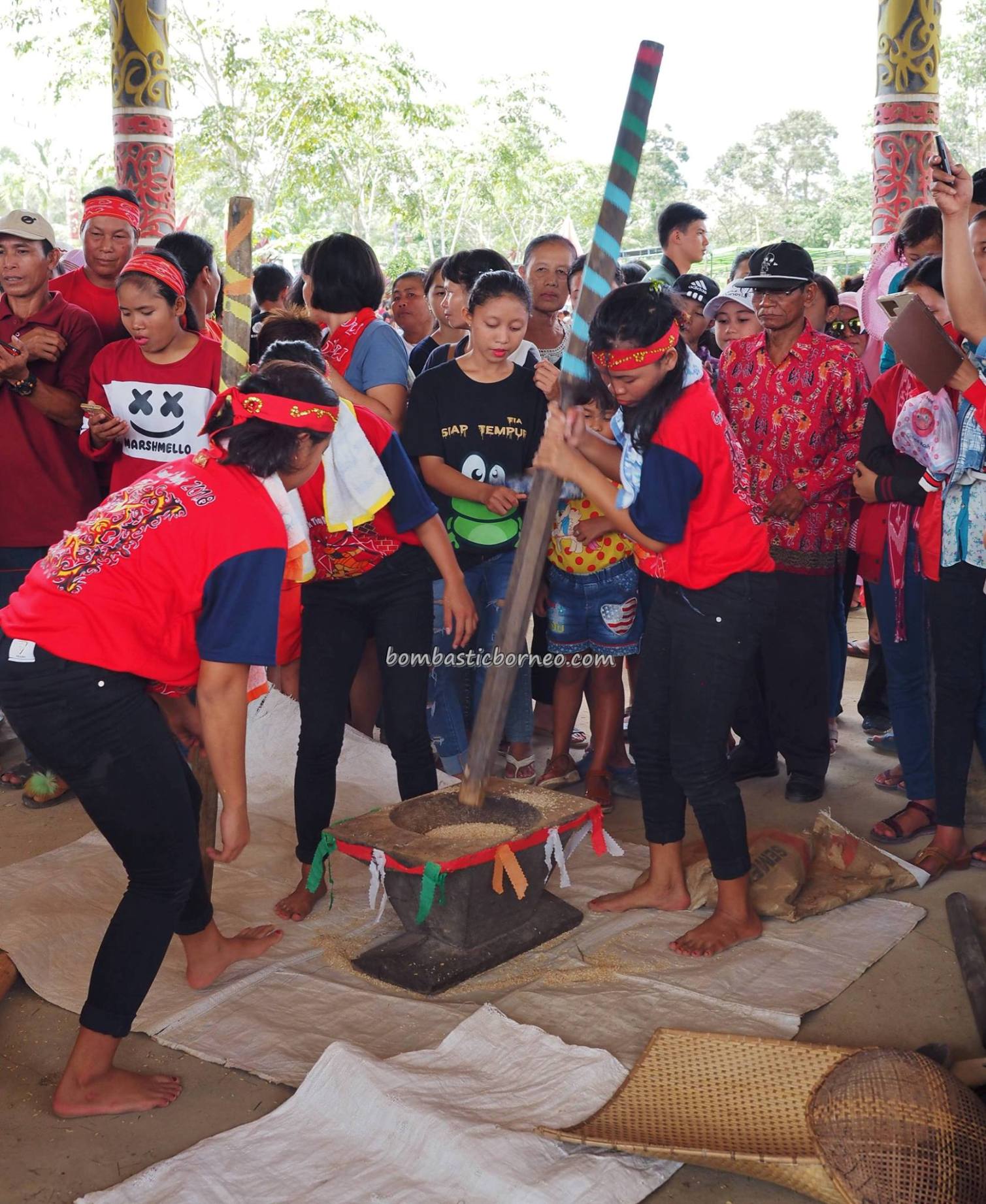 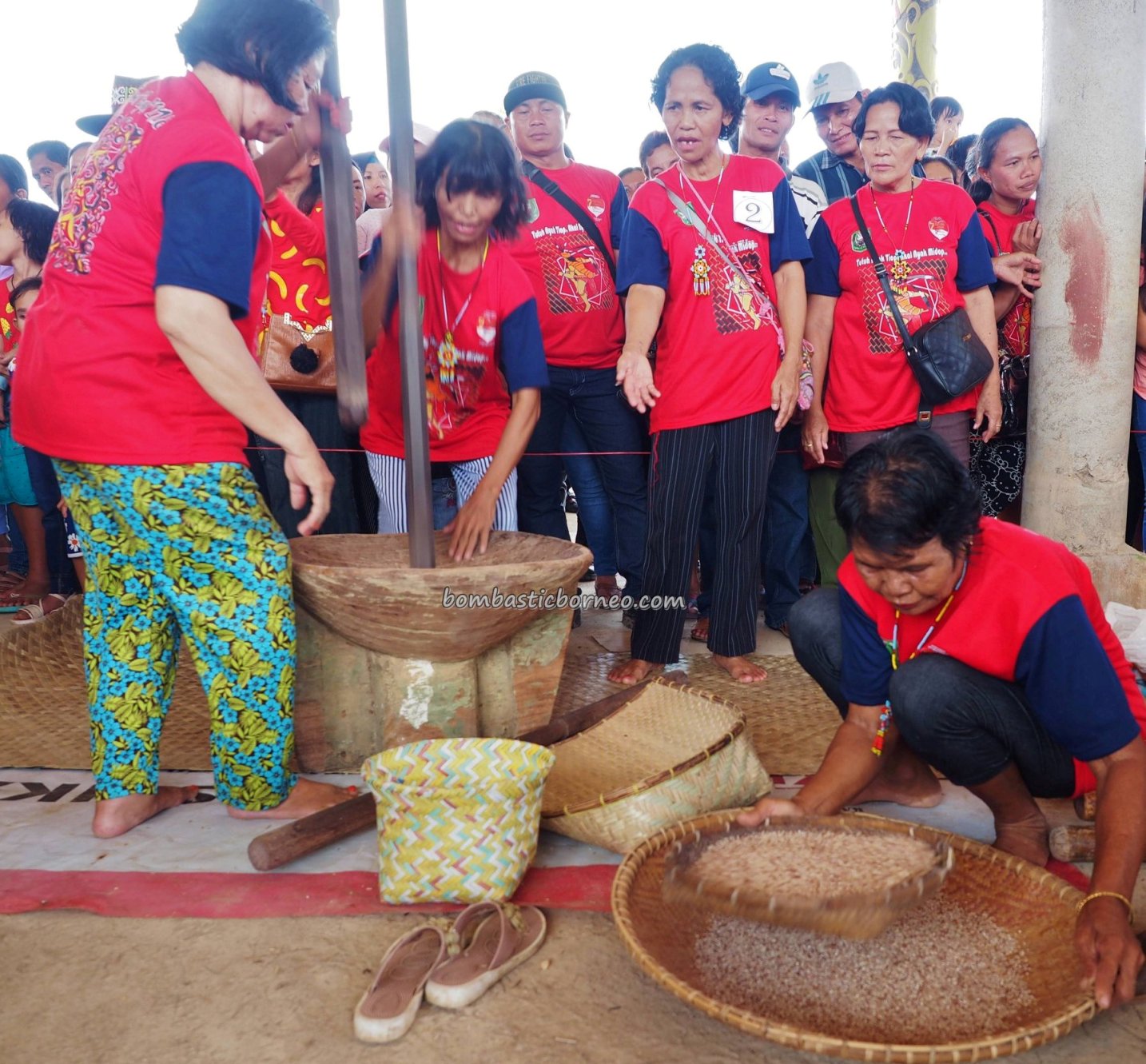 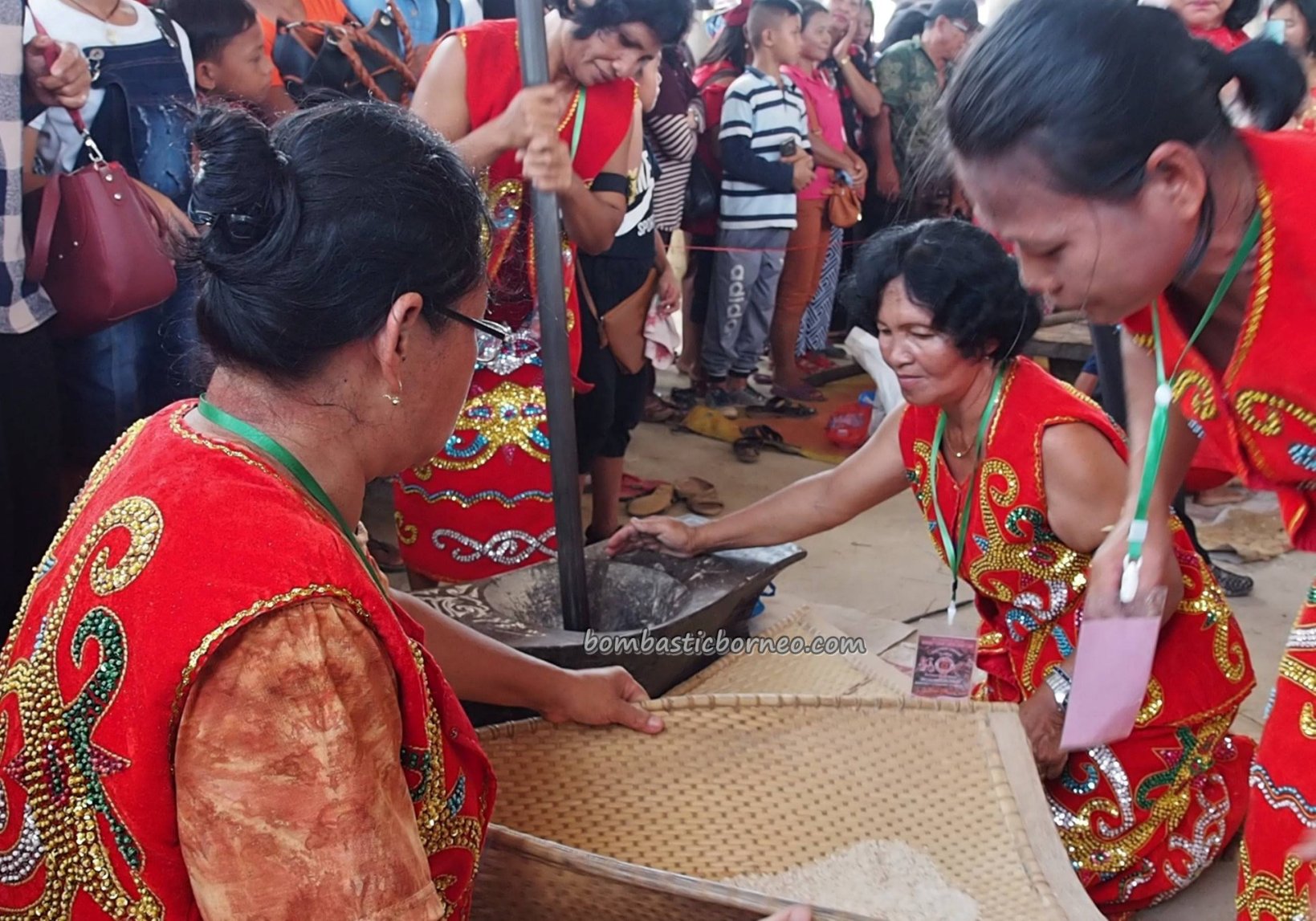 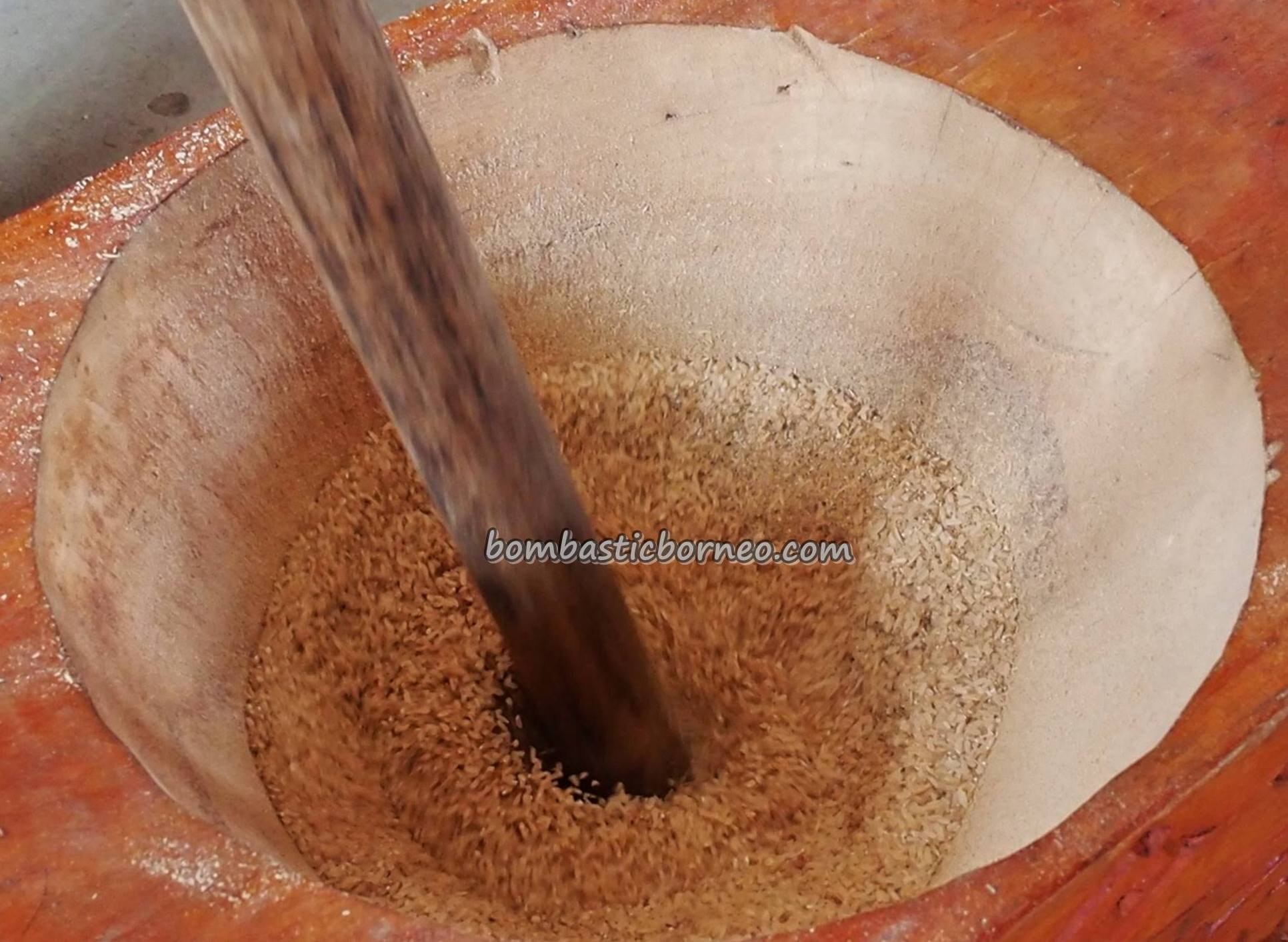 After which the winnowing followed to remove the unwanted husks. 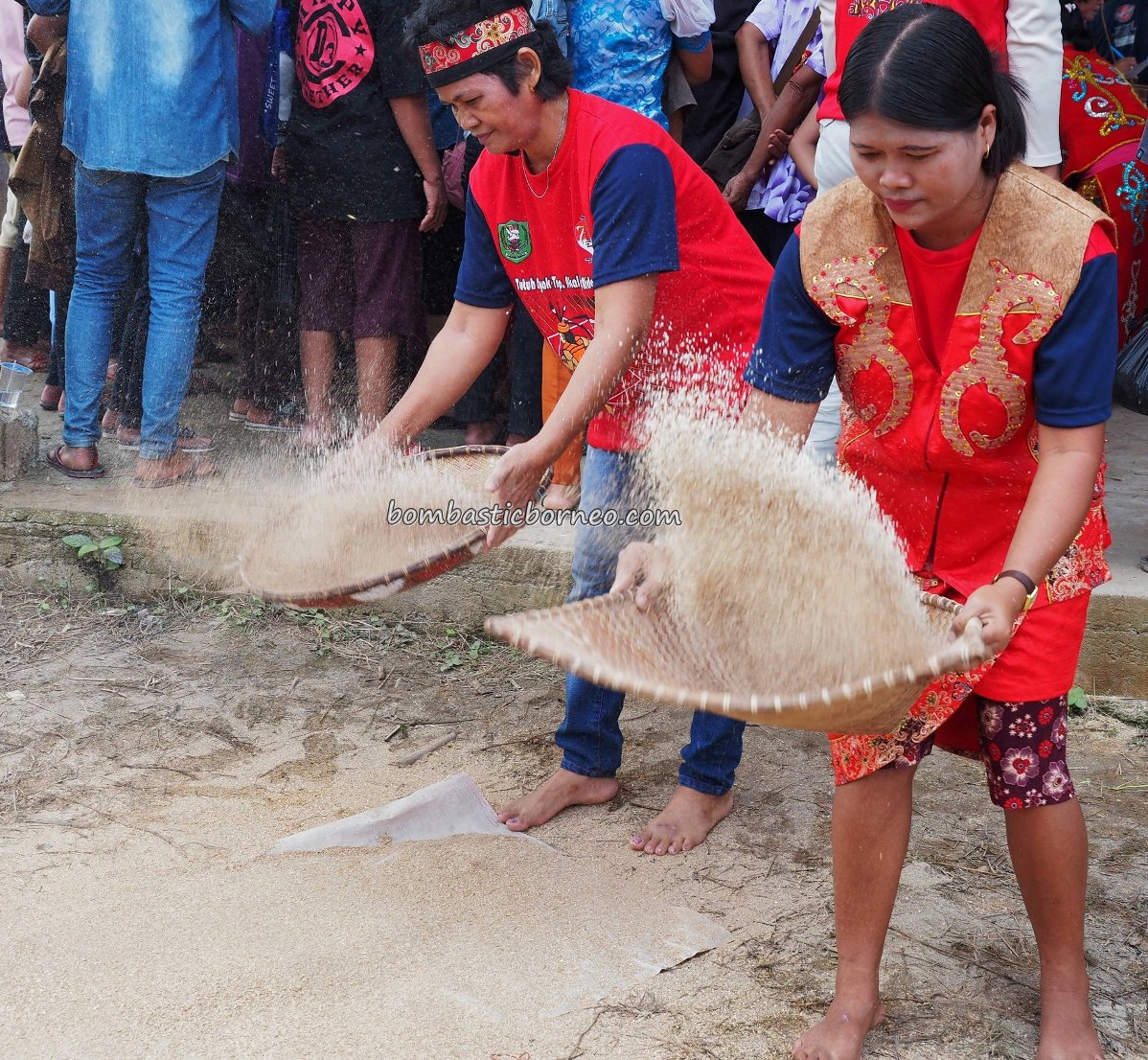 Then they were judged how clean their jobs were. It was a very good way to remind the younger generation how their grandmothers turned paddy into rice manually.

As we traveled the whole of Borneo we could not help noticing lesongs were made redundant by electric rice milling machines. They were all turned upside down to be served as chairs in the villages. Some creative ones would have a wooden plank over two lesongs to be turned into a bench. Some parts of Kalimantan we saw lesongs used for pounding coffee beans or tapioca leaves instead of rice. Whatever it is used as now…..Long live the lesong. Next story………Next, Pancur Aji waterfall of Sanggau. 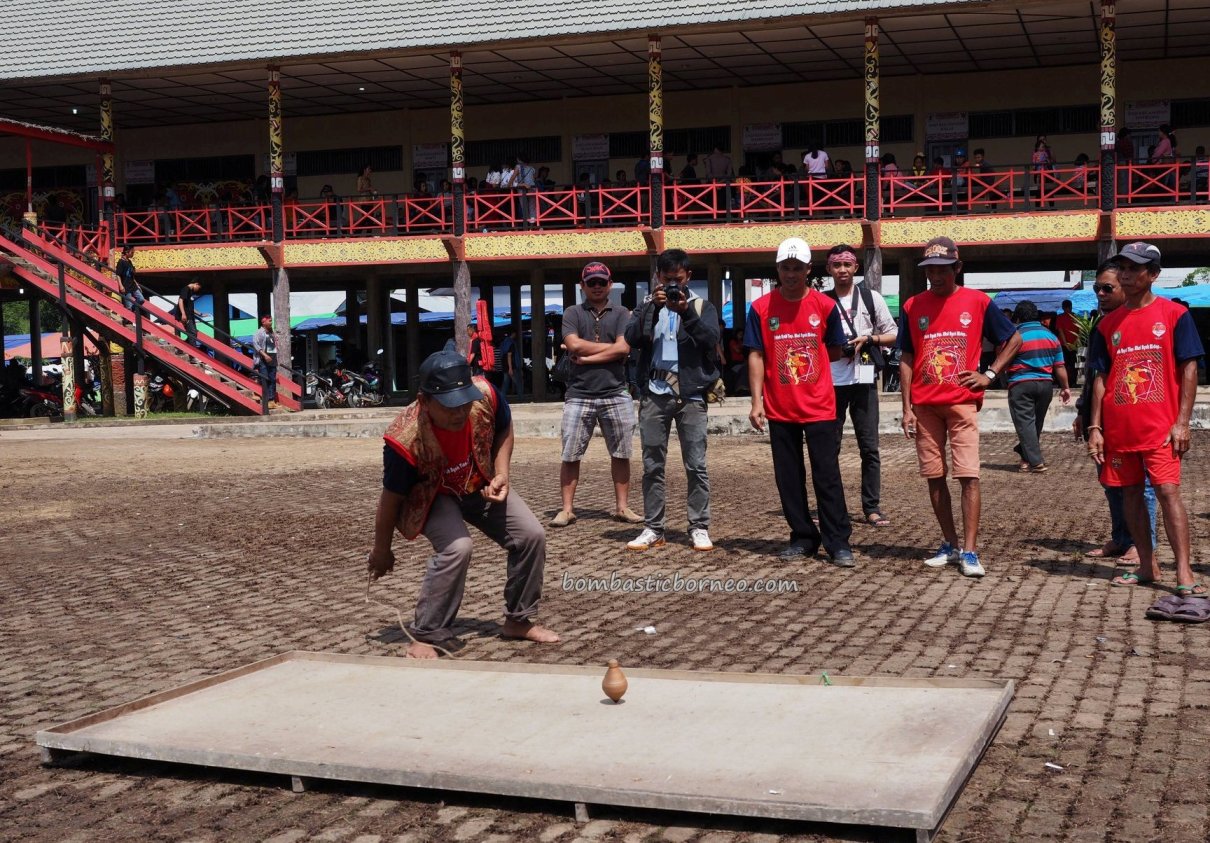 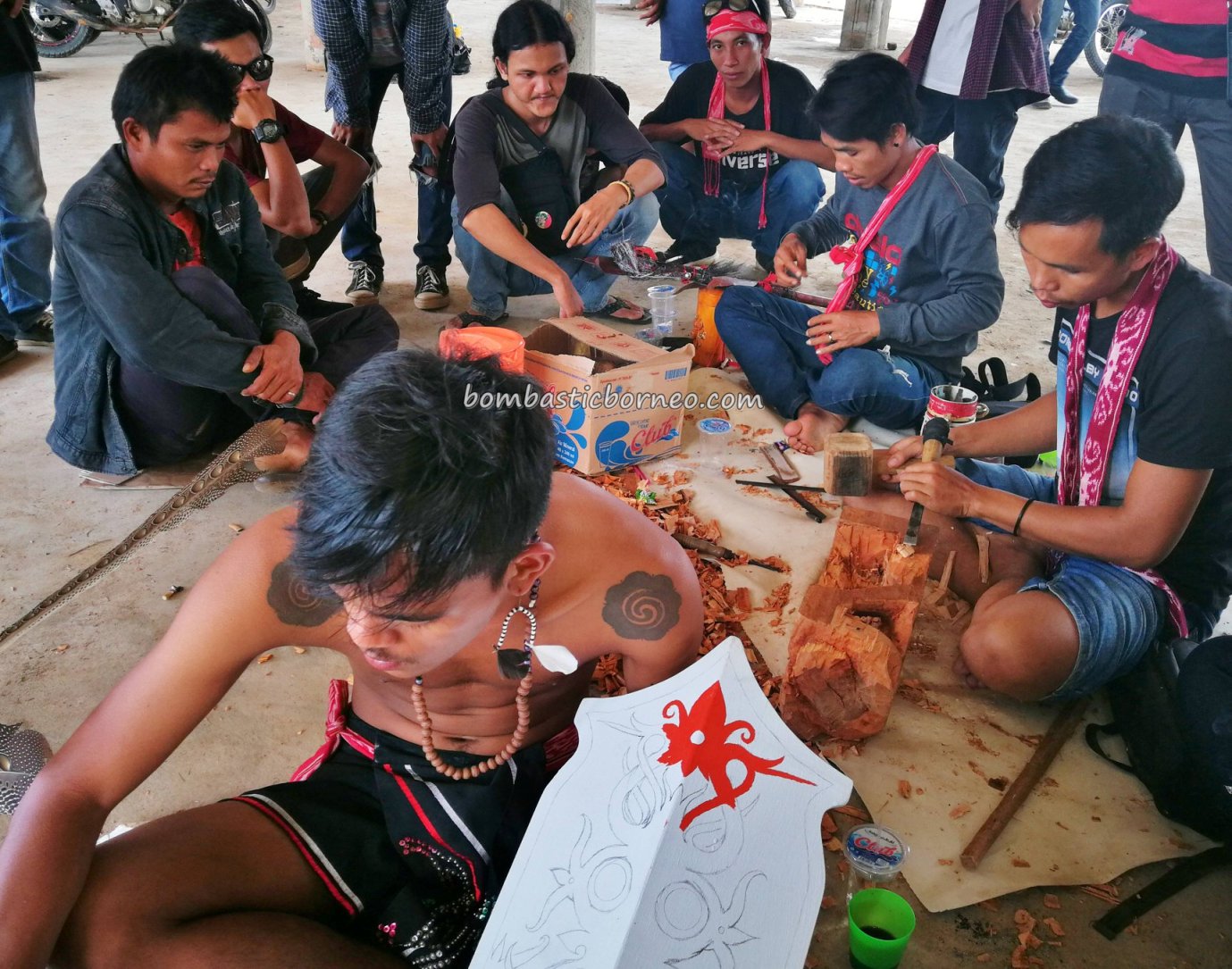 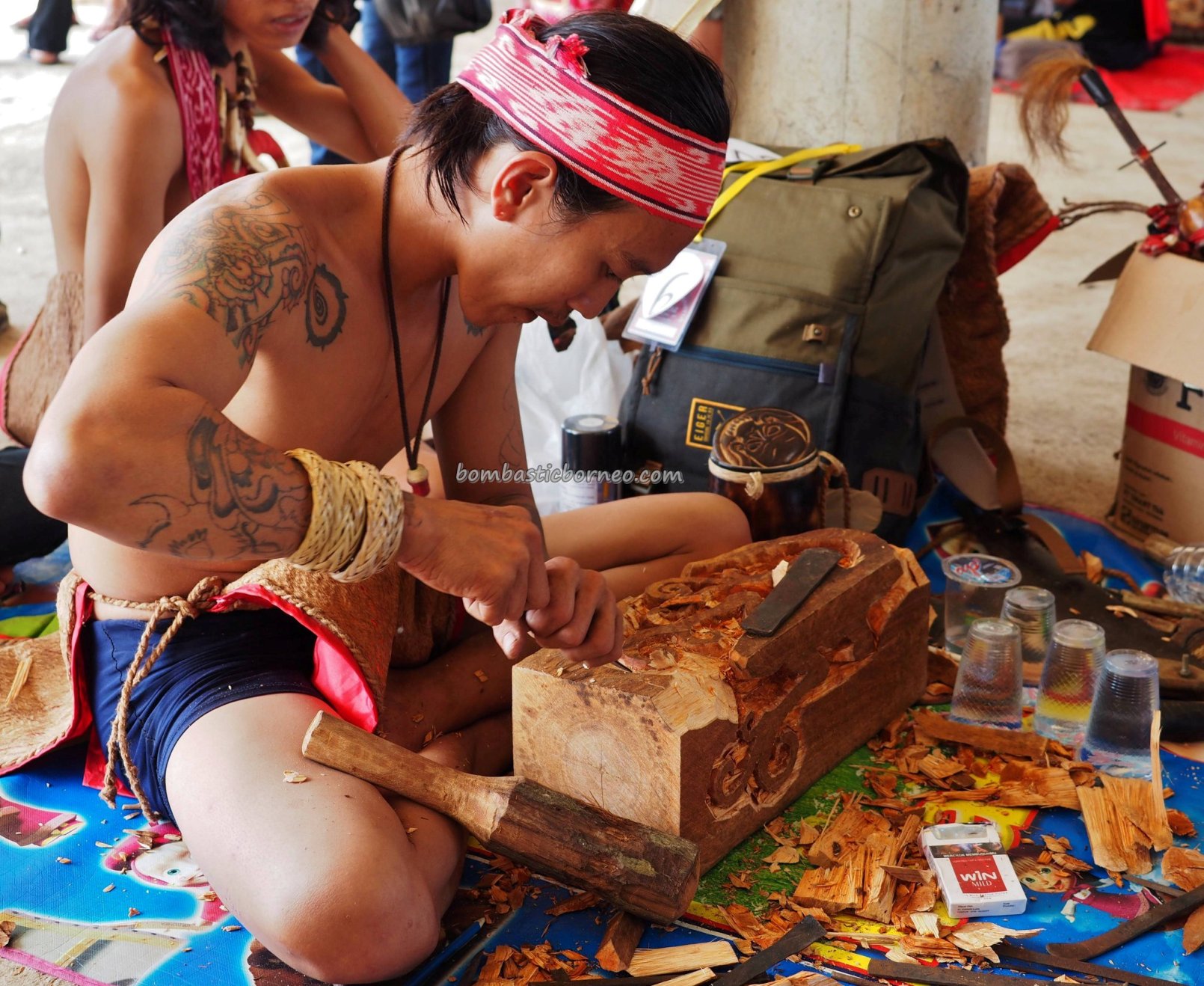 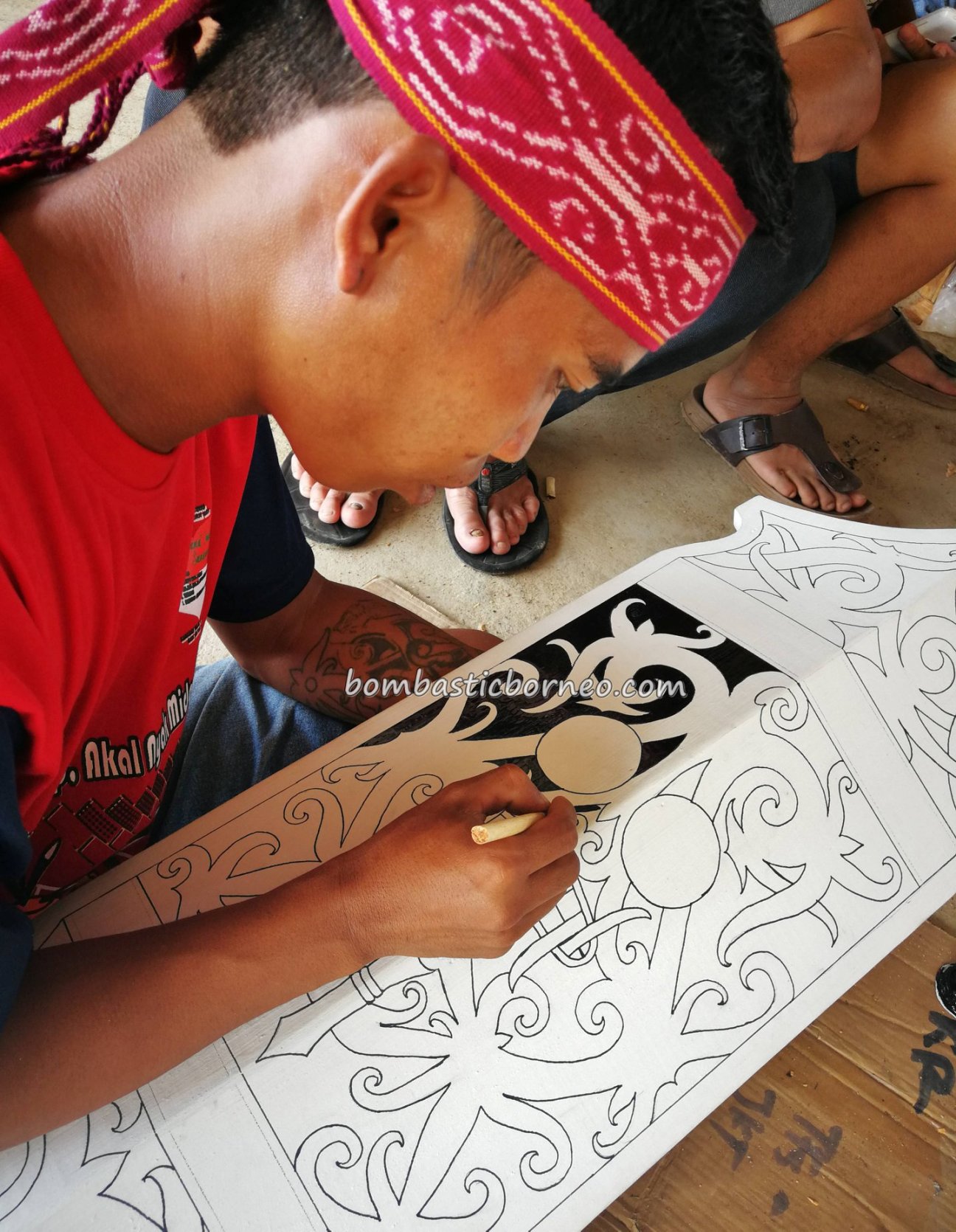 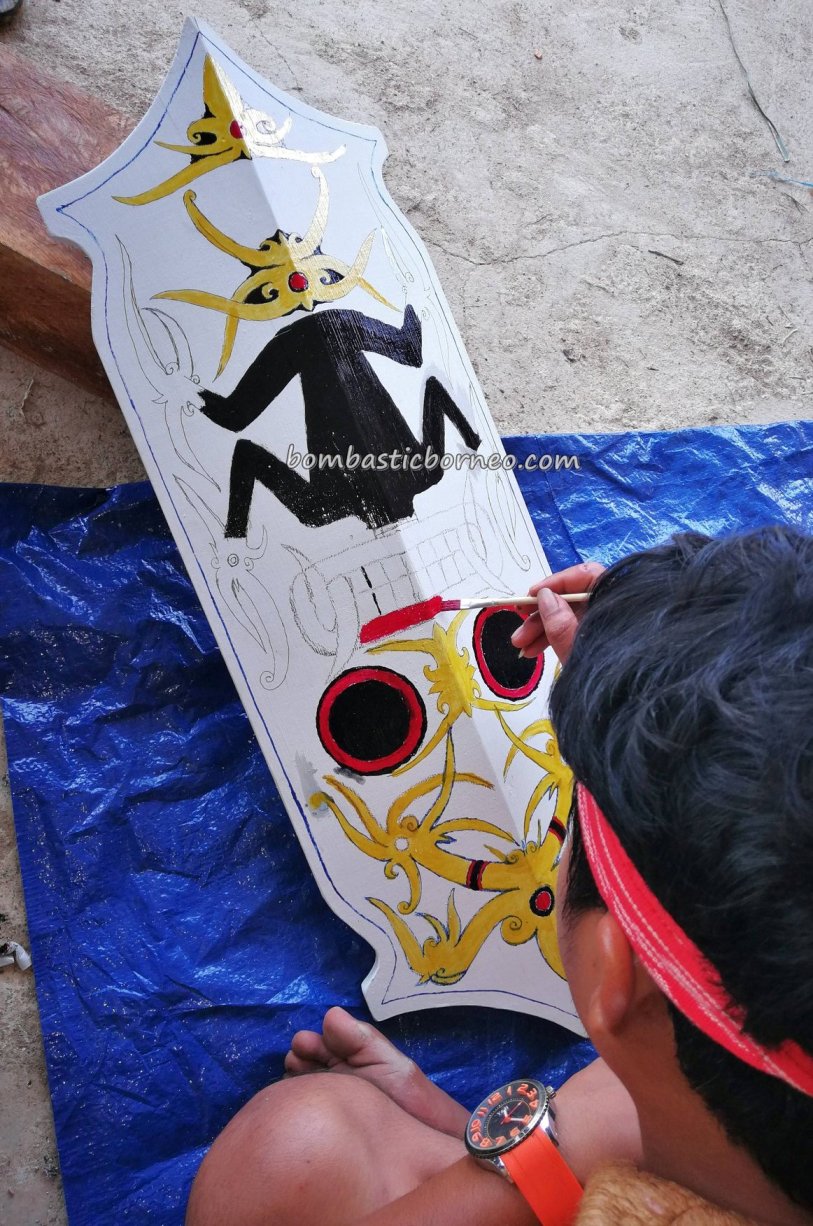 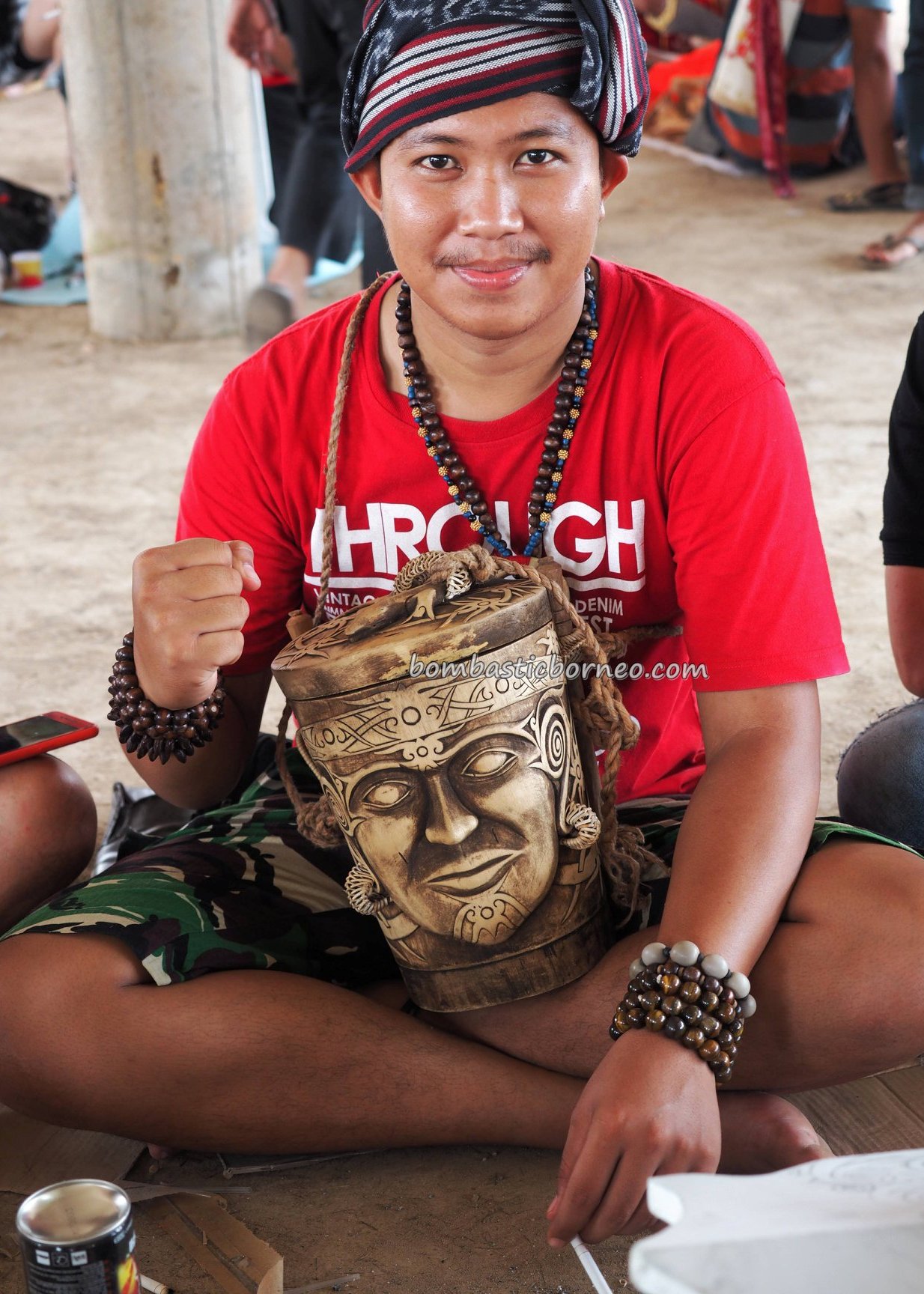