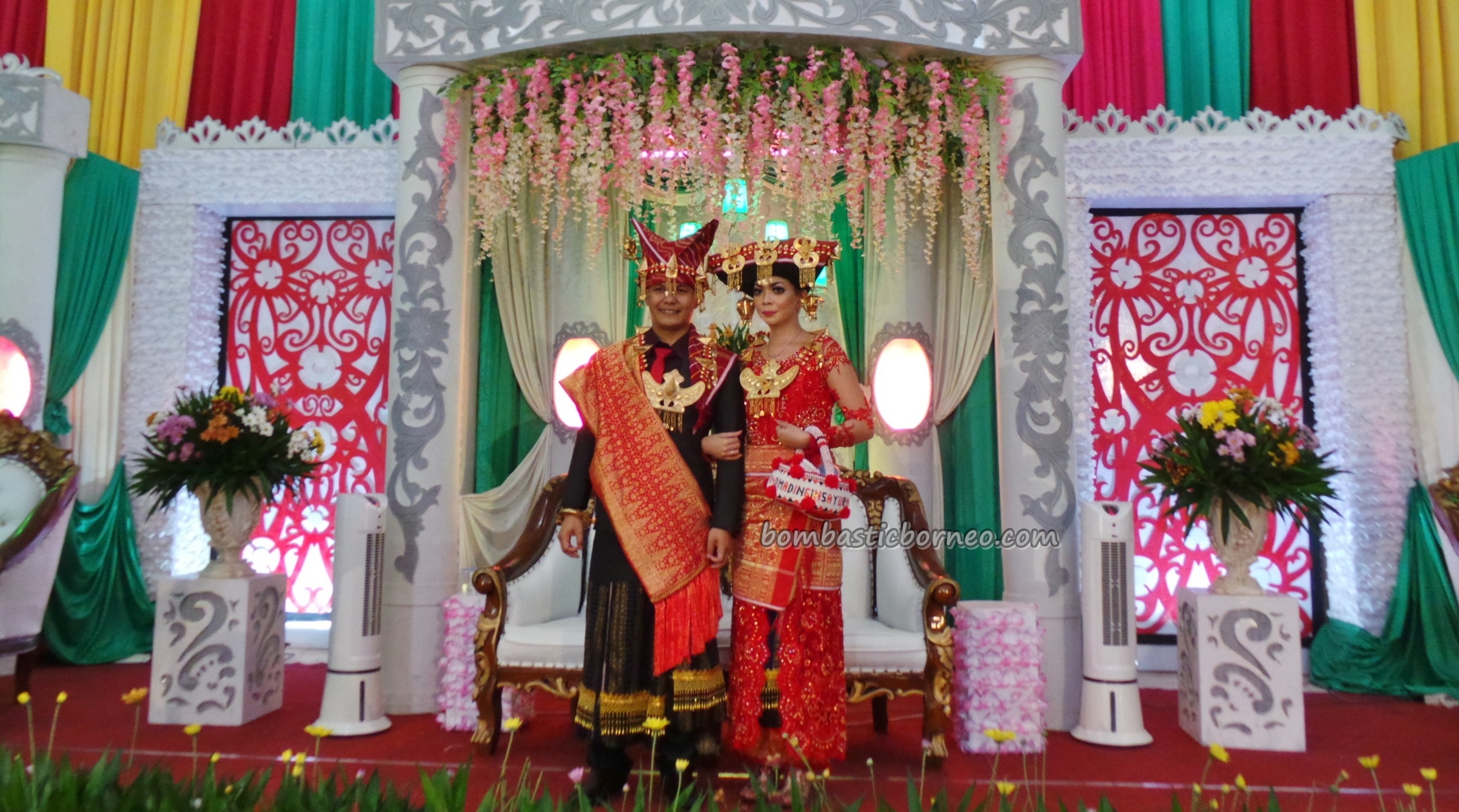 The Batak tribe originates from the island of Sumatra. The chance to bump into a Batak in Borneo would be very slim and the chance to be invited to a Batak wedding would be even slimmer. So when we were presented with this rare and precious opportunity we jumped into it without second thoughts. It was Pak Sutek’s (his wife is a Karo Batak) daughter Desi’s big day and the ceremony was held at Parindu in Sanggau district of West Kalimantan.

Although Pak Sutek’s birthplace is in the remote village of Suruh Engkadok along Ulu Sekayam River, the wedding had to be held near his workplace for the convenience of all invited guests which included some of his own village folks, Kampung Sadir relatives and surprisingly quite a handful of local Bataks residing in Kalimantan. The groom Wilhelmus was an Ulu Kapuas Dayak who had to be adopted by another Batak clan so as to qualify to marry a Batak girl and in his case, a half Batak!

So on the 12 October 10 of us in 4 cars drove passed the Entikong/Tebedu CIQ to Parindu about 2hrs away. That evening we gathered at a brightly lighted hall full of colourful floor mats. On one side was seated the bridegroom, his family and guests while on the opposite side was the bride’s group.

Lots of speeches mostly in the Batak language were delivered by relatives from both sides. We could hardly understand what was spoken but I assumed it must be advices meant for the newly weds. Quite boring for those who did not know what was going on. The highly fashionable Batak ladies took some of the boredom away. Their oversize headgear shaped like a ‘minangkabau’ was cute (check out our video clip below on how they did it). 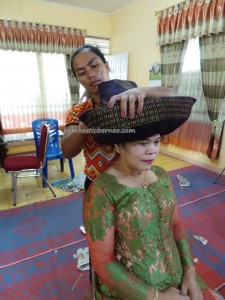 The intricate embroidery on transparent material of their blouses reminded me of the beauty of our Malaysian ‘Nyonyas’, colourful sarongs and their long shawls draped over one side of their shoulders just made them look so outstanding and classy. All their guys had a simple sarong worn round their necks with both ends hanging over their chest. A very unique fashion never seen in other cultures.

The next day’s program was divided into 2 parts, the morning session belonged to the Batak Karo’s tradition. 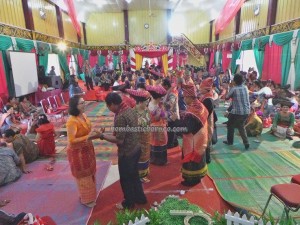 While the afternoon was the Dayak’s which they called ‘nasional’. As the bride’s father is a Sungkung Dayak , the wedding would not be considered complete or ‘face giving’ without a touch of Dayak. 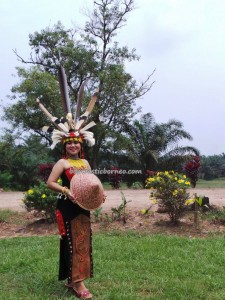 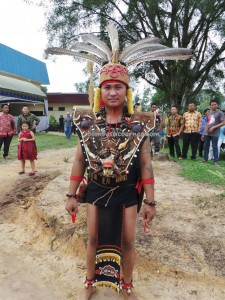 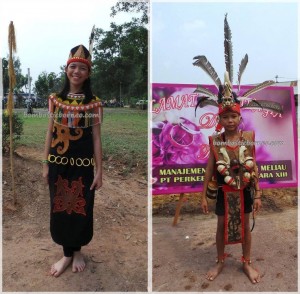 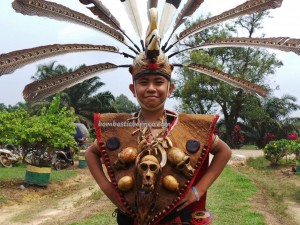 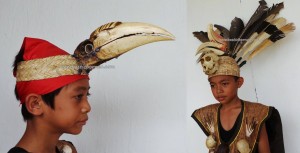 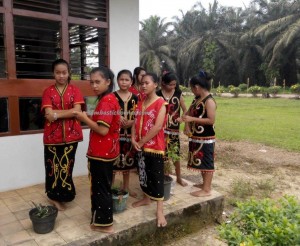 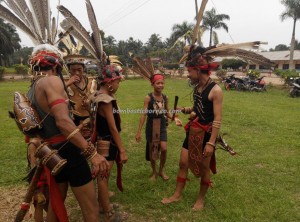 As we only had time for the morning session, we skipped the afternoon’s session in order to be able to make it back to the border before closing time which was 6pm, Malaysian time. However, one car out of the 4 from our group missed a turn and drove all the way to Sosok and failed to make it on time. They had to spend the night in one of the hotels in Entikong. It reminded me of a somewhat similar misfortune 25 years ago when driving back from Pontianak and missed the same turn (Simpang Tiga) and drove all the way to Sanggau. We had to pass the night in Balai Karangan as there were no hotels in Entikong back then. Back then road signages were minimal. Things are defintitely improving in Kalimantan especially the infrastructure although it may be slow. 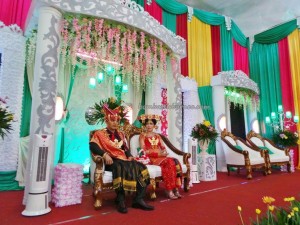 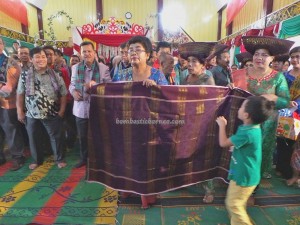 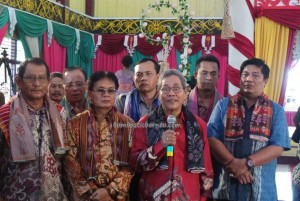 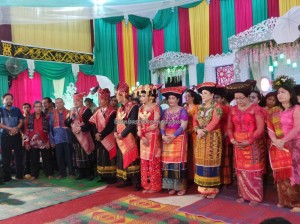 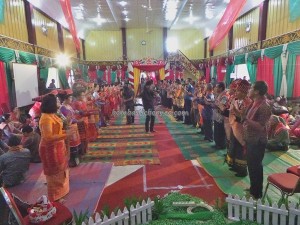 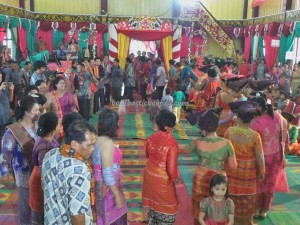