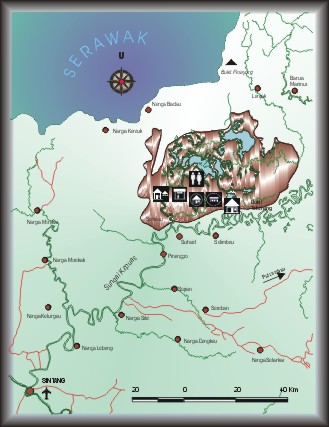 Danau (Lake) Sentarum, a seasonal lake, is located in part of the Kapuas River Basin, about 700 km from the estuary that flows into the South China Sea. Surrounded by hills and highland, Lake Sentarum forms an important water catchment area, and at the same time regulates the water flow through the Kapuas watershed. All the areas downstream are therefore highly dependent on the fluctuating water level of the lake.

The drainage system from this freshwater lake and flooded forest makes Lake Sentarum quite distinct from other lakes. Its reddish-black water is a result of the tannin from the surrounding peat swamp forest. In the rainy season, the depth of the lake may reach 6-8 metres, flooding the surrounding areas and forest. During the dry season, when the level of the Kapuas River gradually drops, water from Lake Sentarum flows into Kapuas to restore the water deficit and keep the water level of the river relatively stable. Eventually, when the dry season reaches its climax, Lake Sentarum and the surrounding areas become a vast stretch of dry land, the fish from the lake inhabiting small, scattered ponds.

Danau Sentarum National Park has been declared an International Wetland Site under the Ramsar Convention in 1992.

The local people around Danau Sentarum National Park belong to the Dayak tribes like the Iban, Sebaruk, Sontas, Punan and they still live in a very traditional way. The characteristic longhouses (betang) vary in size according to the number of people occupying them. This could be between five and 30 families. A typical longhouse occupied by fifteen to thirty families would have an average length of 186 metres and a width of 6 metres. The local way of life is fascinating for tourists; the atmosphere of the betang is harmonious, simple, and friendly, and visitors will usually be treated to a traditional Dayak dance.

Bukit Lanjak and Nanga Kenelang: Views over the lake, boating on the lake, and watching birds.
Bukit Tekenang: Research facilities, including a laboratory.