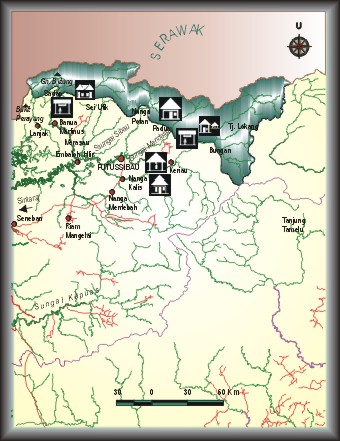 Topographically, Betung Kerihun National Park is hilly. The Muller range which connects Mount Betung and Mount Kerihun also forms the border between Indonesia and Serawak, Malaysia. The Park has been proposed as a “Trans-border Rainforest Heritage of Borneo” together with Lanjak Entimau Wildlife Sanctuary in Sarawak.

Small streams flow from the foothills of the Muller Mountains to form the Kapuas, Sibau, Mendalam, Bungan and Embaloh Watersheds. The Park can only be reached via these rivers.

The Park has eight types of forest ecosystem such as lowland forest, old secondary forest, Dipterocarpus, sub-montane and montane forest, with a high value plant diversity of 1,216 species consisting of 418 genera and 110 families (75% endemic to Kalimantan). Fourteen species are “new records” in Indonesia, like Musa lawitiensis, Neouvaria acuminatissima, Castanopsis inermis, Lithocarpus philippinensis, Chisocheton cauliflorus, Syzygium spicata, and Shorea peltata; and 13 species of palm which are “new records” in Kalimantan, such as Pinanga bifidovariegata and Ixora sp.

The most distinct species of bird in this Park are the wreathed hornbill (Aceros undulatus) and the helmeted hornbill (Rhinoplax vigil) which is the mascot of West Kalimantan.

The potentially vast biodiversity riches of the Park pose a challenge to researchers to reveal them. But the Park also has several other attractions such as beautiful vistas over the forest crown which seems to go on forever; crystal-clear water flowing from waterfalls on the hilltops; birdcalls and the screeches and cries of various animals.

As with other inland people throughout much of Kalimantan, most of the people living around the Park are Dayak. Here, they belong to the Dayak Iban, Dayak Taman, and Dayak Bukat tribes. Many people are still adorned with tattoos in typical and very distinctive patterns.