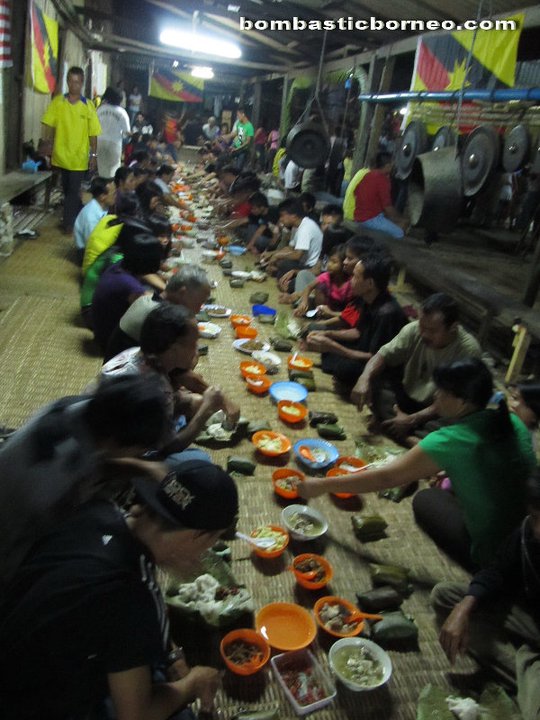 ‘Nyarok’ in the Bidayuh language means to celebrate the padi harvest festival between 2 villages with a big group of invited villagers from one village travelling to another.  In this case more than a hundred villagers of Suruh Engkadok from Indonesia to Sadir to join in the merry making.

The night’s main event kicked off with the ‘parren’ which is essentially an ice breaker where the guests are seated on the floor mat in straight rows and the host villagers offer drinks and snacks to each & every guest  as they introduce themselves to each other.

Sadir played the Super Host role very well witnessed by the number of sumptuous meals showered on their Indonesian brethrens and the non stop flowing  of ‘tuak’ a village brewed rice wine – spirit of 1Borneo upheld to the accompaniment of traditional gong music.

Live pop band music backed dangdut/joget singers from both sides of the border, keeping the young and old dancing all night long at RM1 per dance/song.  Total collection a whopping RM15,000! Not a shock when you see the enthusiastic and supportive crowd from all the nearby villages kept the dance floor  occupied with every song till the roosters start crowing. Lucky draws for the numbered dance tickets probably helped keep participation till late morning. Nice idea of financing an event.

Before we could have enough sleep it was time for breakfast.  Local boy Big Mac who works offshore invited us to join the Indonesians for the farewell breakfast at the longhouse.  In between sipping hot coffee and eating tempuyak (fermented durian) rice we attentively listened to Big Mac’s entertaining story telling, especially the one about meeting with a Penan dukun (a nomadic tribe’s medicine man) who rid him off his diabetes and hypertension ailments by traditional medicine.  We pray for your success in your Penan Herbal Medicine business venture.

And as the hosts & visitors were exchanging their ‘goodbyes & thank yous’ for a very successful 2011 Nyarok, we were busy preparing to do the 1 & half hour trek to Ba Buan Kukuot waterfall.  20 in numbers.  The youngest being a half Italian half Indonesian 2 month old baby.  It’s none other than Tita’s daughter!

I was able to see old friends like Raymond, David Daniele, George Martin, Maureen Liew,  Lutes, Tita Fiocco & his family & his parents who flew in from Italy.  Of course not forgetting Pastor William for inviting us to his son Damian’s birthday party.  New friends we made Chris(Alaska), Erika (Michigan), Dick & Ivy Chai-thanks for the good times.

SEE YOU AGAIN IN SURUH ENKEDEG 2012 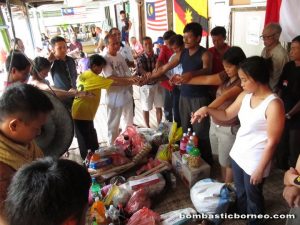 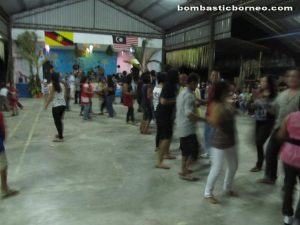