We had ended our 10 day Kalimantan trip and entered Tawau through Indonesian Nunukan by express boat. Dragged our luggage for about 100m to Ming Hing coffeeshop for a sip while I contacted the car rental guy Mr Chua (+60163451881). With the help of the GPS app in my phone, we slowly maneuvered our way out of town and hit Kuhara Road for the 30min drive to Tawau Hills Park. It was not difficult to locate even for first timers like us.

Along the way, we gave two pregnant Bugis mothers with six kids a lift. They were walking under the hot sun after visiting their fathers in the lockup, obviously illegal migrant workers. Dropped them off at Gudang 4 oil palm estate. Felt sorry for them.

It was a pleasant surprise to arrive at a nice carpark and noticing an obviously well organized park complete with visitor’s booth, canteen, friendly staff to answer our enquiries, hostel accommodation, picnic spot, multiple trails for hiking and of course the 900m trail to the ‘Tallest Tropical Tree’. Paid RM3 each (RM10/foreigner), given a map and off we went in search for the ‘tallest tree’ or so we thought.

The dry gravel trail was breezy and shaded by trees of dizzying heights, 60m tall or more. The ‘anti slip’ wire mesh on the wooden bridges was just brilliant. 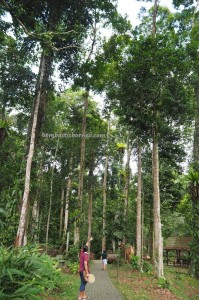 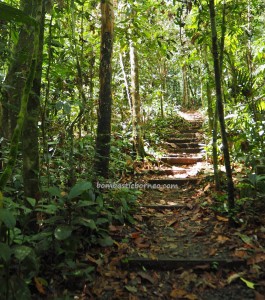 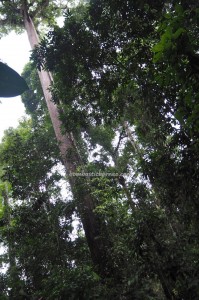 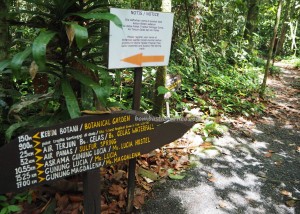 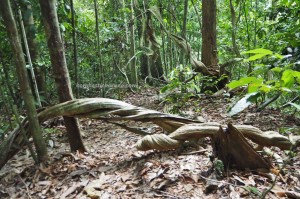 Half way along the trail I thought I heard up in the foliage as if someone was sawing a tree. Stopped to check but saw nothing. The same noise intermittently continued as we walked along. Later, I caught sight of who was making those noises, hornbills! It was the flapping of their wings. So many of them, mostly Pied plus some Rhinoceros ones. If only we had time we would have tied our hammocks and stayed here all day long just to watch them.

Finally we reached the spot where the giant yellow meranti tree was standing. The size of its buttress was nothing extraordinary. We have seen bigger ones in Mulu and elsewhere in Kalimantan during our many hikes. It may not have the girth but its height made it the king of the tropics.…..at least for a few years. 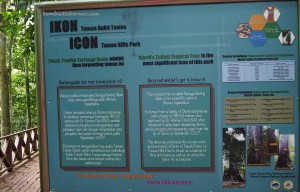 Little did we know that it was not the tallest anymore. It became the pretender to the crown in June 2016 when the real Yao Ming was discovered some 120km away to the west in Maliau basin. Scientists using laser mapping accidentally noticed this gentle giant which is also a yellow meranti towering over all the other pretenders in the Maliau Basin. The local climber was attacked by an eagle and bees before he could tape measure it at 89.5m.  But as of 10th Novermber 2016,  it was announced that yet another taller tree was discovered in the Danum Valley, a runaway winner at 94.1m (World’s Tropical Tree Discovered).  So far, the tallest ever recorded in the tropics although temperate trees could do more than 115m.

Upon checking online reviews of Tawau Hills Park, things were not as rosy as we perceived earlier on. There were attacks of blood sucking horseflies and leeches. Blocked trails due to fallen trees and overgrown bushes. No signage to indicate crossing a stream to the hotspring. Dried up hotspring or not hot at all, season depending. The most shocking negative news in Wikipedia was the increasing number of mysterious disappearance of visitors to the park. Shudder. My guess is in such a heavily forested place many victims must have been swept away and killed by flash mountain floods while soaking in the waterfalls and rivers. Maybe I will just stick to day trips for my future visits. The flora/fauna and the prana was too good, especially the good prospect of spotting the 6 types of hornbills that thrive here. 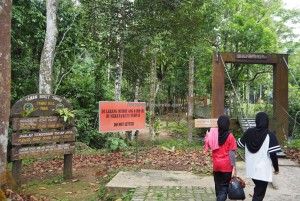 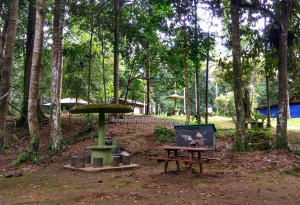 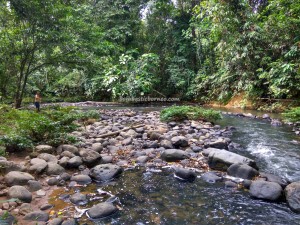 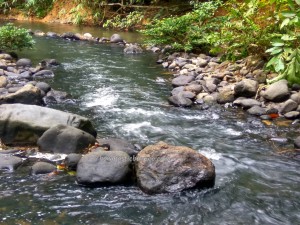