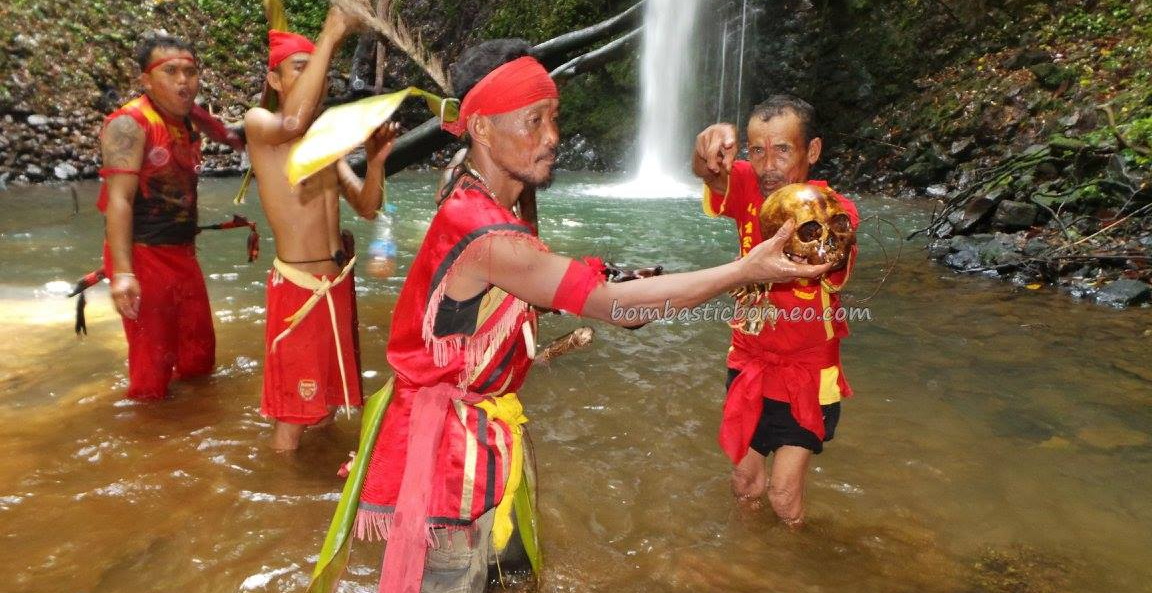 This was our first experience of ‘nyobeng’ or skull bathing ceremony with the Bakati or sub tribe of the Bidayuh Dayak. Sujah is slightly more than an hour’s drive from the border town of Serikin. Thanks to Pak Sunai the Kepala Dusun, Pak Ibun and also Pak Mukim the Ketua Adat Desa Sango all of Dusun Paling Dalam for helping to organize this trip for us.

On the eve of the ceremony we were introduced to the Kepala Adat of Dusun Sujah, Pak Siah. Sujah is about 7min drive away from Paling. He explained that this nyobeng was not like the usual nyobeng held in conjunction with the rice harvest but rather held for the purpose of tidying up the baruk (skull house). Pak Siah talked with a lot of commitment on the restoration of the Bakati culture which he and the elders of Sujah were afraid that it might be dying. By the look of the crowd and number of participants his aspiration was definitely very well supported by his fellow villagers, young and old. Pak Siah was very apologetic when he mentioned that the ceremony might not measure up to our expectations as most of their gongs were broken. We assured him that it was OK and indeed the next morning ritual was far from disappointing. The spirit and enthusiasm here was overwhelming. It reminded us of our awesome experience in Sebujit.
After everyone was anointed with the red pinang fluid, two skulls , one of an orangutan and the other a human, were lowered from the storage compartment. Anointment and feeding of these skulls followed. 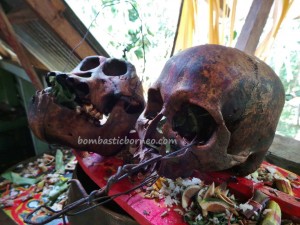 After which, we set off for the bathing ceremony at the Riam Bakrim waterfall more than a kilometer away. While the entourage walked barefooted we by default, led the parade in our doublecab with Mei Er shooting from the back. Pity them having to walk under the hot sun and scorching asphalt. 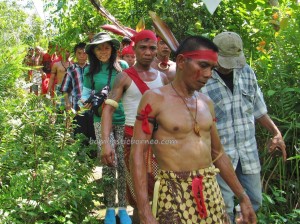 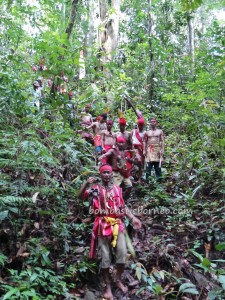 The steep descent to Riam Bakrim waterfall was more challenging than I had anticipated. The concreted path made it all the more dangerous. Steps should have been the safer option. Witnessed from behind the slip and fall of one of the lady students from Pontianak.
Bathing the skulls against the backdrop of Riam Bakrim made the ritual even more exotic and spectacular, something very different from the other nyobengs we have attended. 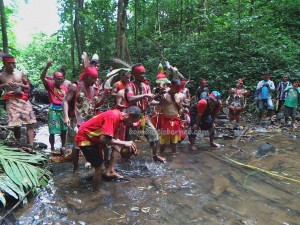 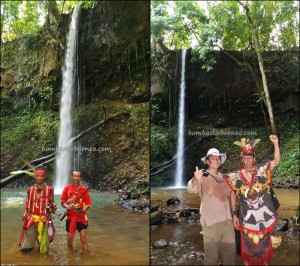 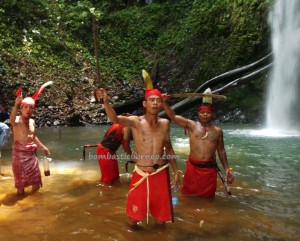 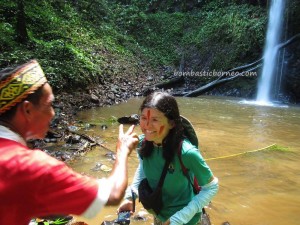 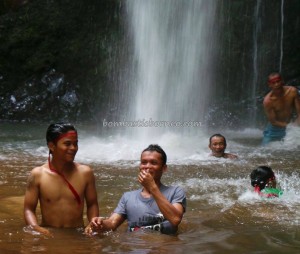 After driving back to the baruk the entourage suddenly burst into a frenzy of screaming and rushing towards the steps with the gong ensemble hitting a very fast tempo. 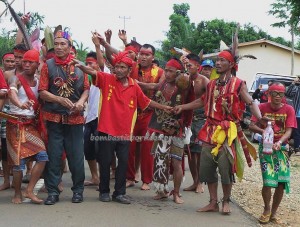 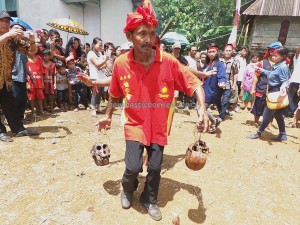 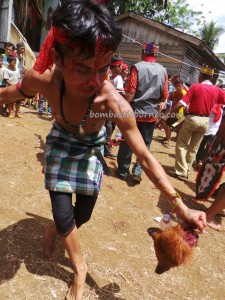 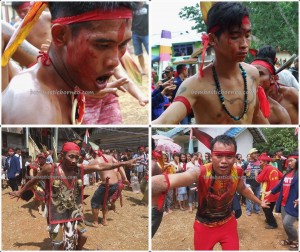 Hair raising, I must admit. Tempo lowered and the whole crowd danced in jubilation. Tuak or rice wine flowed. What a show! Sujah folks in dire need of good times. How we wished the partying could last longer but the elders had other ideas. One last ritual had yet to be executed – the offering of the pig. Finally, lunch was served.

Pak Siah later invited us to his house to show us his antique jar collection and to explain ‘hukuman adat’ or ‘customary court’. Check out our post here : Justice in the native court of Borneo, interesting.

We had to cut short our stay at his house as our next host in Kampung Segiring kept calling Pak Mukim on the phone to remind us of the next nyobeng. 2 nyobengs in a day, such a deal! 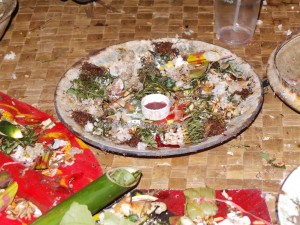 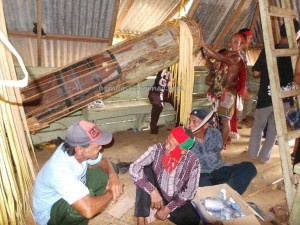 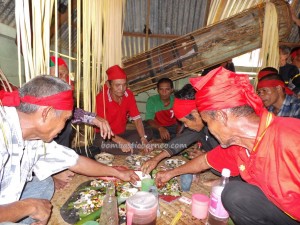 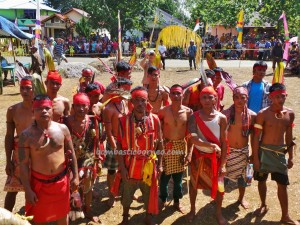 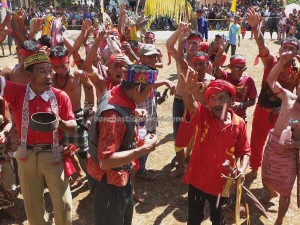 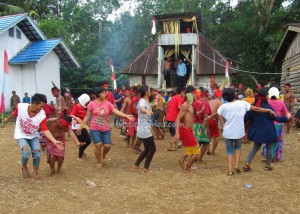 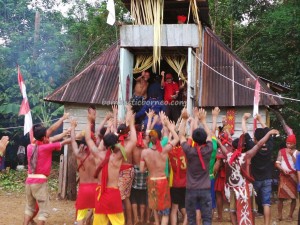 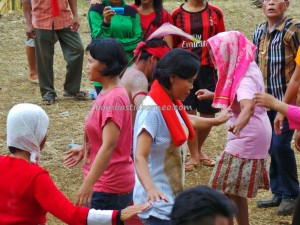 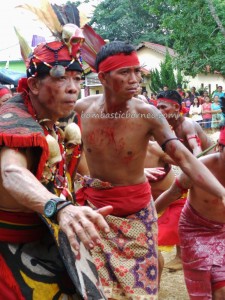 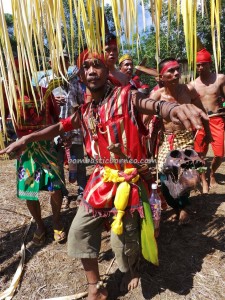 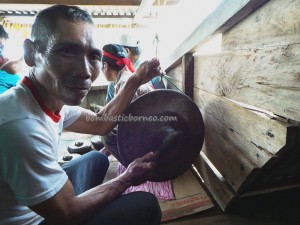 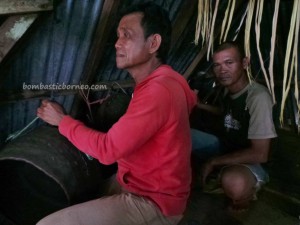 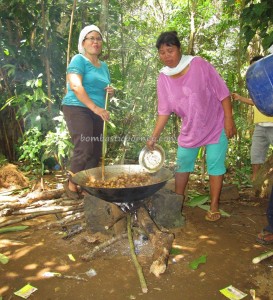 Kadamaian River Before / After the Mount Kinabalu Earthquake