Thanks to Edhui for these photos 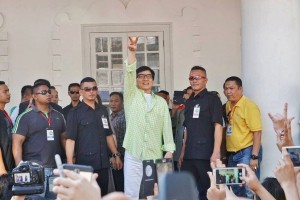 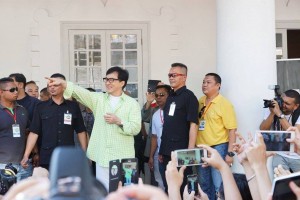 Jackie Chan in love with Sarawak

ACTION superstar Datuk Jackie Chan came to meet the fans in Kuching — and is already in love with Sarawak.
He also wants to film a romance movie in the state, instead of the action genre that he is so well-known for.
“Sarawak is beautiful. I can see the river just over there. I think when I come back, I’ll only do a love story. Otherwise, it’ll be car and boat chases, explosions and fighting again,” he said here yesterday.
Chan is here this weekend for the second biennial Asean International Film Festival and Awards (Aiffa).
Chan promised to create more Asian-flavoured movies, adding that he did not want to be typecast in Hollywood.
“In Asia, I make movies to say something. I don’t make movies for money anymore. My last movie was Dragon Blade and I wanted to say something about unity, peace, harmony,” he added.
He later met thousands of fans waiting for him at the Old Court House.
“I love you Sarawak! Thank you, thank you,” he said, blowing kisses.
Meanwhile, Mulu Global Media Beijing, which is a consortium of Chinese film production studios, is exploring the possibility of setting up a movie hub and theme park in Kuching, said its CEO Jasmine Kho.
(Source : The Star)