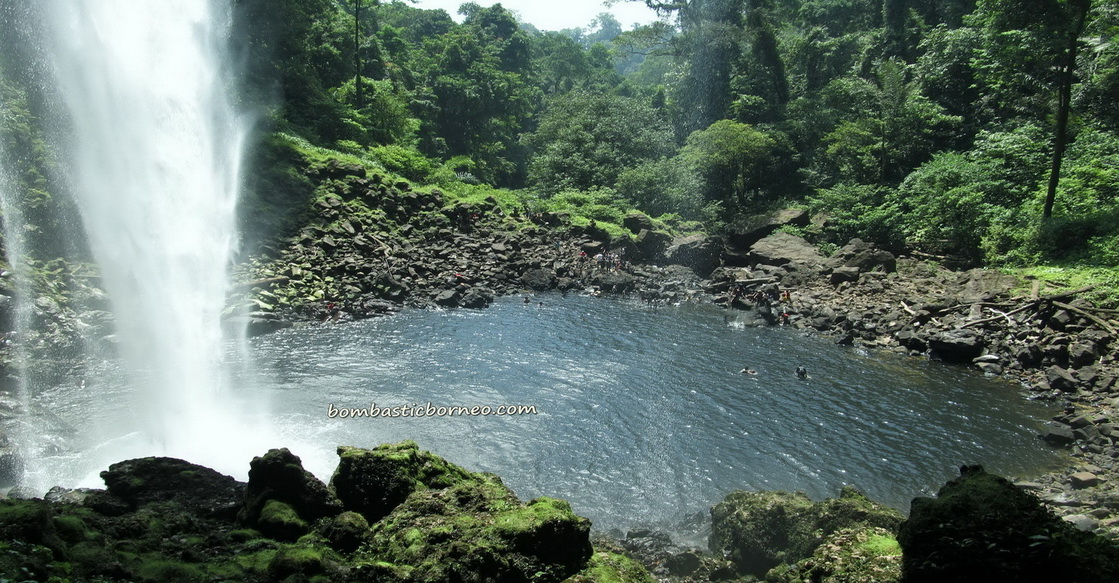 The most challenging day trip event to organize so far.  Safety for our participants was our No.1 priority as it would involve passing through the border without the SOP of CIQS and we could be prosecuted for illegal entry.  With no precedence to guide us, we had to find out the hard way.  There were 3 issues we thought we had to look into before making this trip possible.  They were :

First of all we had to drive all the way to the Serikin border post to check out the route and more importantly confirmed with the Malaysian army manning the border if it was ok for our convoy to pass through.  Surprisingly, they told us it was not their business who got out of Malaysia but rather who came in.  However, they advised us not to bring any illegal stuff into Indonesia for our own safety. Such a relief!.  One down.  Next we approached the Immigration office in Kuching to enquire on how to get some kind of ‘permit’ or ‘pas lintas batas’.  A friendly Bidayuh lady officer who happened to be from Bau after checking with her boss came back and told us that this had never been done before so they had no idea how to go about issuing one.  We had no choice but to assume we did not need one.  So next we went to the Indonesian Consulate in Kuching to talk to one of the junior officer who told us to come back 3 days later after listening to our story.  3 days later we were rejected.  Shocked!  We wondered if he ever discussed with his boss. Without a permit we had no choice but to postpone our trip.   Unconvinced, we requested Frans in Bengkayang to get the Ketua Adat of Desa Sahan to issue us an invitation letter.  After which we set off to the consulate office again.  Only this time we insisted to see the senior officer.  Request granted.  Within 10 minutes of our discussion with Pak Wibi, he instructed his subordinates to immediately process our permit of entry.  He even complimented us and agreed that the villagers have all to gain from the tourism potential of Berawatn.

So early morning of 23rd June’13  we finally made our trip to Berawatn Fall via Serikin with a convoy of 8 cars. The week end market was just about to start.  Frans Wijaya, Jamli Panago and Ahau the Ketua Adat  of Jagoi Babang were at the border since 7am to receive and lead us.  A couple of kilometers in, we had  our consulate permit stamped at the the Indonesian immigration office before heading for the town of Seluas.  Made a brief stop before continuing the drive to Desa Sahan.

When we arrived at the junction an hour later we had to wait for another 45minutes before being joined by another group of photographers from Pontianak who called themselves ‘Exposure’.  A further 10minutes drive to Kampung Melayang we were received by Mr Kasinus Kilin the Ketua Adat (or Customs Head).  He hoped into our car and off we drove towards the last village Kpg Pangkok.  Along the way he impressed me with his story about he and most of his 1,500 villagers strived to protect the jungle and stopped any further invasion of oil palm.  Much damage has already been done. Tough fight.  But good to know at least some people are providing some resistance.  I wished he had put in the same effort to improve the condition of the dirt road we were struggling on where bridges were made from tree trunks and patches of 4 wheel drive excitement.  Dangerous but not impossible to drive on with double cabs.  Definitely impossible for sedans. The condition was still a lot better than the last time we came to recce during the rainy season. 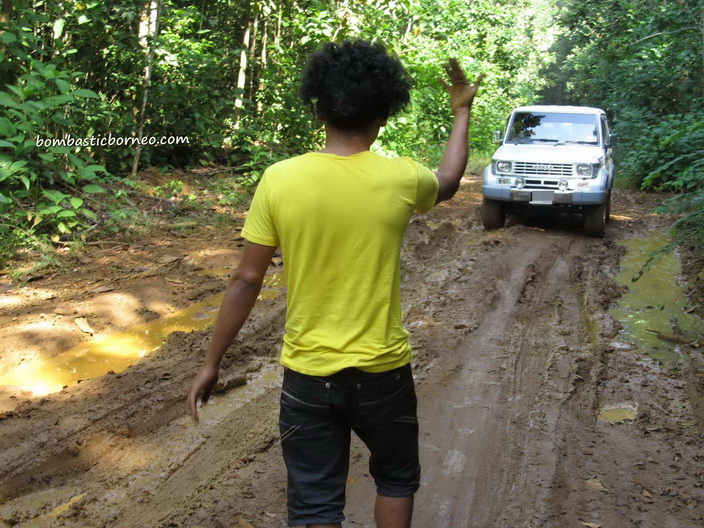 Muddy road greeted us once we entered the vicinity of Kpg Pangkok.  The gotong royong organised by Kasinus days before our arrival made sure none of our cars got stuck in the mud.

From what I saw, there were not more than 15 houses here in Pangkok and the strange feedback from our ladies was that these houses do not have toilets!  Wondered how ‘business’ was executed.

Anyway, after parking our cars we set off under the bright sun through the jungle trail to see what we came for, the magnificent  Berawat’n Fall.  The trek was about 45 minutes, mostly flat. 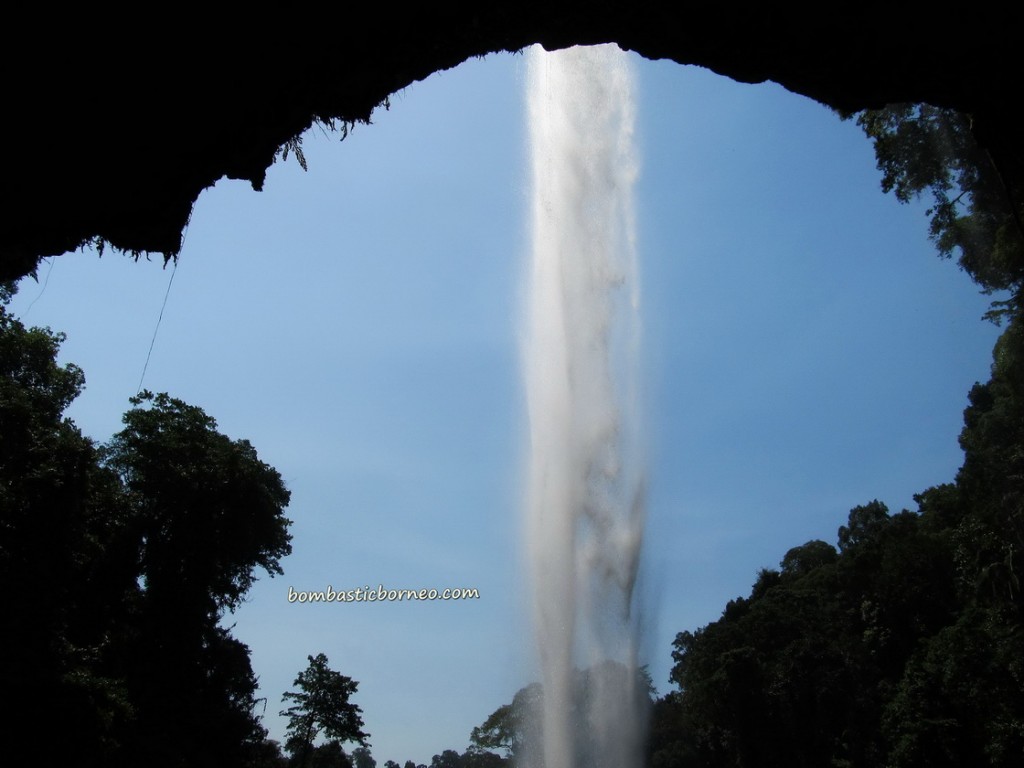 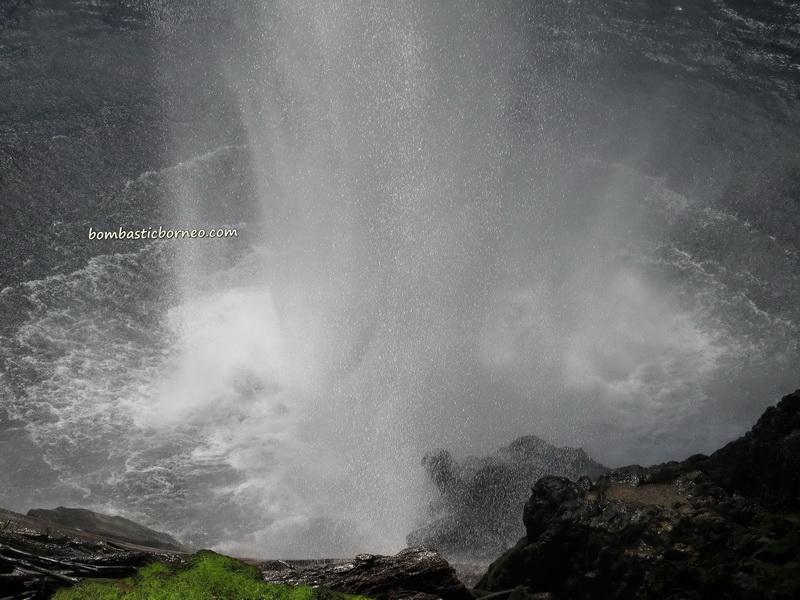 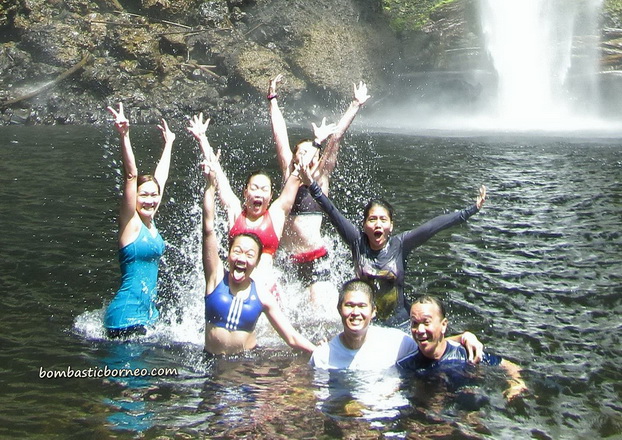 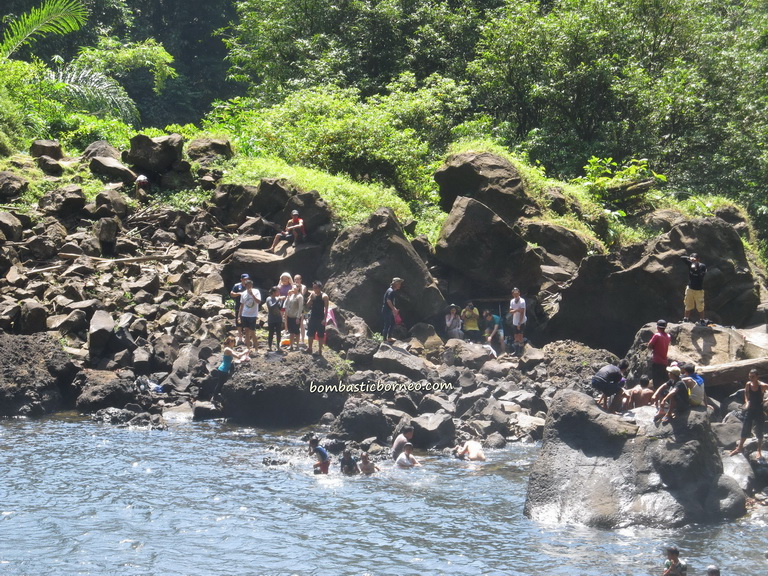 Cave behind the fall

One final shot before leaving 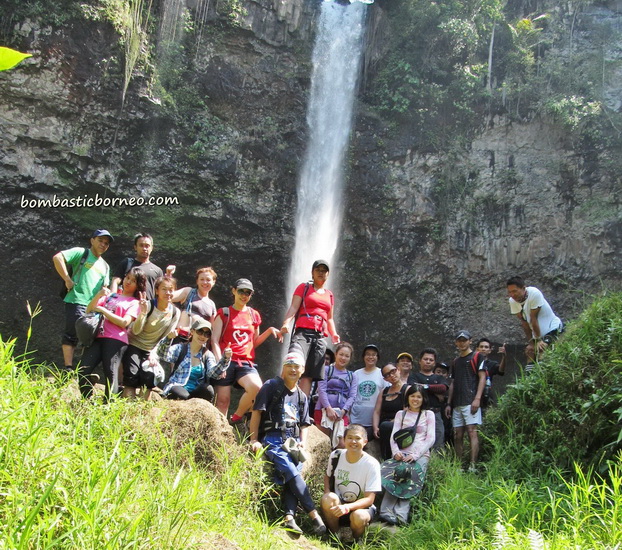 To cut the story short, after we had enough of fun at the 98m Berawat’n Fall we made our way back to Kasinus house at Kpg Melayang (the photos can talk better).  Hot tea/coffee and other local delicacies were waiting for us at the sitting room.  Without wasting time Kasinus gathered his gong ensemble to entertain us with him personally performing his Bekati traditional dance.  Next visit I would like him to add more colours by including the lady dancers in their traditional costumes.  We had fun nonetheless and most of us joined in the dance making this waterfall trip even more memorable. 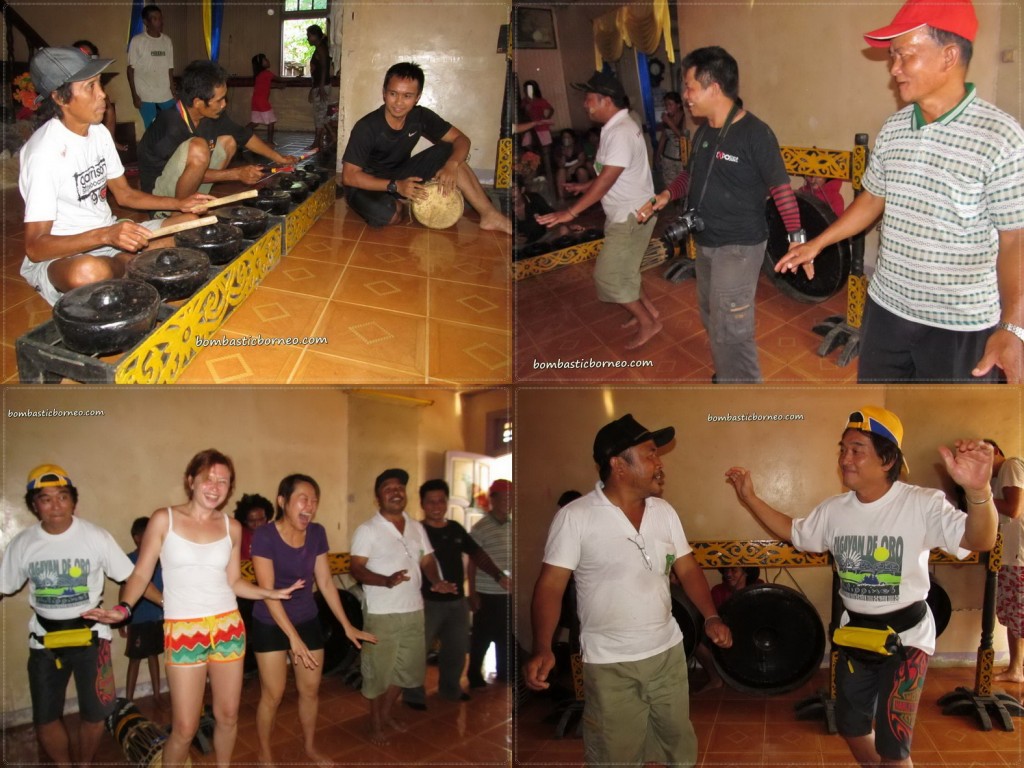 Next was the group photo shooting which took up quite a bit of time.  There were more than 20 cameras in line to finish the job.

After which Pak Ahau the Ketua Adat of Jagoi Babang who was invited by Frans Wijaya (for extra safety reason) insisted we made a quick visit to his village since we were passing through to the border anyway.  He proudly showed us the site where the gawai hall and model longhouse would be constructed. 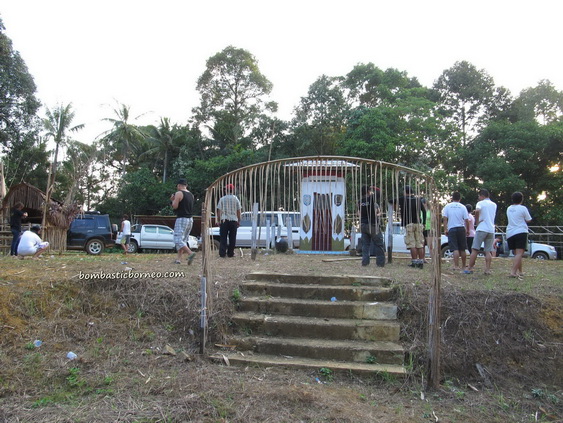 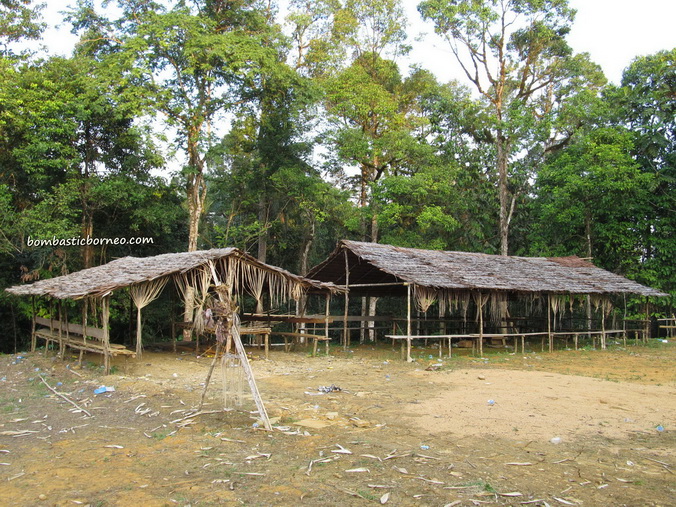 Frans and Jamli accompanied us right to the border to make sure we enter Malaysian soil incident free.  Such great gentlemen.

We know they went the distance to take all precautionary steps including the Bupati’s endorsement.  Their responsibility towards our safety was 101%.  We bade farewell and shared the same relief that the event ended as well as it started.  Honestly, the joy of getting away with trouble with the authorities was just as intense as the joy of organizing this trip. This responsibility weighed a ton on our shoulders. We must take this opportunity to warn you guys out there from Kuching not to take procedures lightly when crossing the border at Serikin.  We have heard of many stories on extortion by both non uniform and uniform personnel.  Yes, the Bidayuhs can do it without passports and get away with it.  Yes, some lucky guys on motorbikes with their helmets on got away with it too.  But if you are not Bidayuh and get caught, God help you.  When you are on the wrong side of the law ransom hunters will have no mercy.  The magnificent Berawat’n Fall is really worth all the trouble of getting proper papers.