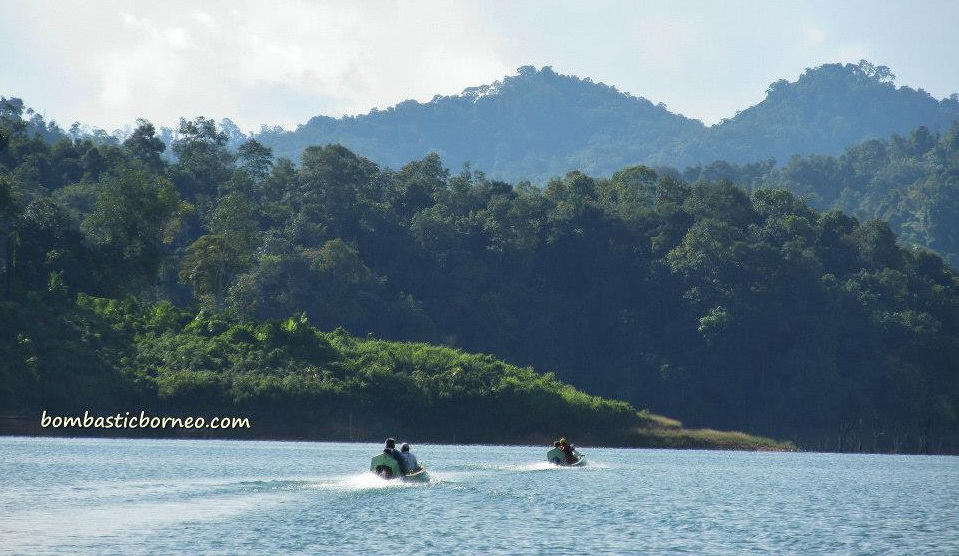 First & foremost I would like to thank Danney Tan, a freelance tour guide, for inviting us on this trip to the oldest longhouse in Batang Ai.  Having gone on other trips to 2 other longhouses, Spaya & Sumpa in Ulu Ai, has given me an opportunity for comparison.  Spaya is just too ‘modern’ but good hospitality while Sumpa is too ‘high end’ with the comfort of luxury looking tourists and may be out of reach for the budget travelers.  Ukom is less than 30 minutes by boat and is the nearest of the 3.  Its longhouse is 30 years old and has all the settings of an original and authentic Iban longhouse.  Although comfort may be slightly compromised, it was really worth the 5 hour journey, mostly on the road plus the 2 stopovers at Serian town and the compulsory coffee break at Lachau Bazaar.   Serian market is itself a speedy institution to learn about the varieties of food and agricultural products(some wild) of Sarawak while barter trading Lachau offers a lot of Iban crafts and some of the most exotic stuff consumed by the natives – ‘litak’ a squeaking type of edible slugs is one of them.

As we arrived at the private Hilton jetty, longboats were awaiting, helmsmen with their friendly smiles and greetings helped us load our stuff for the ride across the Batang Ai HEP lake.  Blue sky and with the wind in my face, the ride was so calming to the spirit.

If Danney was trying to surprise me, he did a pretty good job.  Because after disembarking and walking up the hill to Ukom longhouse, there stood before me was one of the most original structure unlike most of the longhouses I have been to.  It has withstood 3 decades and is as authentic as it can be.  Just what tourists want to see.  No wonder Danney has been bringing visitors nonstop for the last 6 years. I guess Ukom has become his second home. 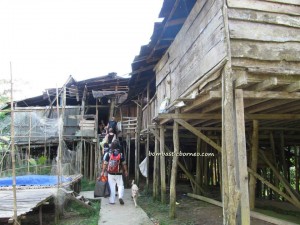 Just before dinner I decided to walk around for a bit and chanced upon a young boat builder, Sating, by the river bank.  He gave me a crash course on boat building Iban style with minimum hand tools which comprised of a ‘parang’ (machete), small carving knife (lungga), chainsaw and a generator operated planer.  Watching him use the chainsaw for shaping the wooden ribs had me in awe.  One other important lesson that I learned from him was the reason why Ibans here built their boats almost 50feet long-stability for shooting rapids and better buoyancy for heavier load where the cargo weight is distributed lengthwise.  Remember that during dry season upstream can get very shallow.

And it was time for dinner.  Thanks to another freelance guide, Jaga, he volunteered to cook for us and his own guests. Danney sure liked that part and called him, ’Buddy’.  I like the way how these guides contracted by different tour agencies work in cooperation in situation like this.  Foods were all shared on one table.  There must have been more than 10 dishes with so many different varieties of vegetables, my kind of food!  But of course there was chicken and fish too.

The highlight of the evening after the food was the dance performance by 2 males and 1 female dancers backed by gongs .  The males put on their warrior’s outfit while the female was adorned with their hand woven ‘pua kumbu’ dress, beaded shoal called ‘marik ampang’ and silver belt.  Guests joined in the dance and took turns for a photo session with the dancers.  Arak drinking continued into the night but we chosed to crash early for the next day’s waterfall trip.

After a quick breakfast the next morning, we set off by boat again to a drop off point just so we could do a short trek up a hill.  Along this trail Danney did his bit of explaining the uses of different varieties of plants either for its usage or as food.

The scenery from the top of this hill with the meandering river was breathtaking too.

We continued on with the same boats for about 15 minutes upstream and where it got too shallow we had to alight and continued with ‘water trekking’.

Garit, our guide for the day showed us how he did net casting on the run, a technique very new to me. It was fun watching him doing that all the way to the picnic spot. Surprisingly, he caught quite a handful although mostly little ones.

Upon arriving at the picnic spot at Tutong River, longhouse helpers wasted no time in preparing lunch, jungle style.

Mei Er, Garit & I had more important issues in hand, to look for Wong Perabong and Wong Agol waterfalls along the tributary of Tisau River.  The water trail was nice and cool.  We could sense the sudden drop in temperature as we entered this tributary.  Garit displayed his sharp hunter’s instincts when twice out of nowhere he jumped on 2 soft shell turtles as we trekked along the cold stream.

They were brought home for his son as pets, thank God..  We reached the smaller Perabong after 30 minutes while the bigger Agol took us another hour.  After all the photos and video were taken, it was time to call it a day. 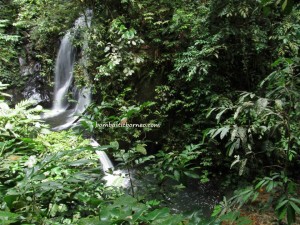 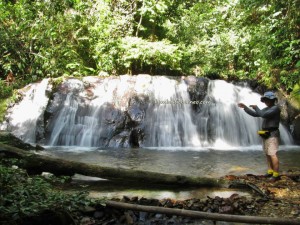 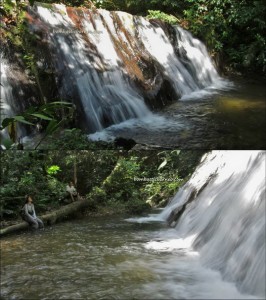 Another night, another awesome dinner by Jaga again.  After dinner was done, it was time to distribute the donated used clothings and snacks contributed by the 9 foreign tourists.  It was done fairly by cast lot system according to the number of families or doors in the longhouse. All donated items were evenly divided into groups and a number attached to each.  Each family then picked a random number to match the group.  Interesting idea of equal sharing.

The second night was accompanied by a heavy downpour and the zinc roof sounded like it was fired upon by assault helicopter.  I smiled and thought I would never be able to experience this in the city, such a privilege.  Machine gun or chirping cicada, sleep I will, for it has been a long day………trekking in the streams of Batang Ai.  I remembered what Danney said,” I don’t know for how long more will this longhouse hold up”.  At its age it may collapse anytime and I may never sleep like this again.  Thank you Ukom.  Goodnight……zzzzzzZZZZZZZZZZZ.