After two previous (failed) attempts to reach TEGORA Mine, we did not have a great deal of confidence at being able to reach it this trip…but since Gawai festivities were in full swing, we decided to combine another attempt to reach the mine with attendance at a GAWAI OPENING @ nearby Kpg Sogo. Thanks to Bombastic Borneo for a chance to publish/post this guest photo documentary on the trek…..”into the heart of Borneo”…

Antimony mining–of great importance in Sarawak’s early economy–started in Jambusan, Bau Dist. in 1823. Borneo Co. opened Tegora mine (@ Bengo Mtn Range) in 1867, and it was a principal source of Antimony & Cinnabar (from which mercury is obtained), until it was finally closed in 1916. It has a dark & sordid history as natives & convicts were forced to work in the mines.

The trek can be done from Kpg Seropak or Kpg Sogo..either way it requires about 8 hours to make the 15 km return trip. Most of route is along an old (1800’s) railway track along which horses drew cart-loads of antimony ore.

With the exception of the Cable Suspension Bridge near Kpg Seropak, most of the old railway bridges have washed away…so one needs to “wade” across or cross rivers and streams on high-level (flimsy) bamboo bridges.

Near start point of the 8 hour trek trail passes open farms of Kpg Puak (near start of Tegora trek).

Plentiful *(& hungry) leeches never leave you alone unless you are in midstream.  We planned our rest stops accordingly…….

After about 3 ½ hours trekking we reached Tegora mine site – overgrown & reminiscent of Angkor Wat in Borneo’s Jungle. It takes about an hour to walk around the ruined mine site – then 3 hours to trek back to Kpg Puak – making it a long but rewarding day’s trek into Sarawak’s distant colonial past. 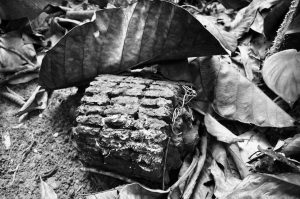 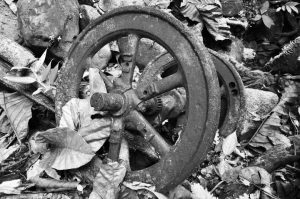 Thanks to Tan KP , Clement Lo, Jackie & Jo-lynn & guests of Batik Boutique Hotel & Ng Hong Dak, Tan Wee Ming, Kho CB, R.Basiuk (who took many of these great photos) & others who participated in previous “old timer’s Tegora Treks” & this one to Launch Gawai 2011”  !!!