Gumbang/Sebujit  Gawai is an annual reciprocal festival celebrated between Kpg Gumbang of Sarawak and Kpg Sebujit of Indonesia-similar to the Sadir/Suruh Engkedeg ‘Nyarok’ event.  Kpg Sebujit by the way is some 9 trekking hours away from Gumbang.  Such a show of Bidayuh brotherhood!  And this strong bond is further enhanced by the gracing of DUN member Dr. Jerip Susil ,  DBNA President Datu Ik Paon and Organising Chairman Dr Patau Rubis.  With this support Gumbang guys came out in full force complete with traditional costumes, colours and gong music that an Australian expat proclaimed ‘it’s the best Gawai that Kuching has seen in a loooong time’……how true indeed.  Thanks to Desmond Kabar for the invitation and hosting us.  For some strange reasons Gumbang ladies did not seem to be as enthusiastic as the men, except for the 3 from Sebujit.  More Lady Power next year, Sarawak!!

The 3-day fest started off mid afternoon with a procession from the border thru the village and to the ‘baruk’ .  As the men danced at the ‘tanju’(bamboo platform) to the rhythm of the gong ensemble in the baruk,  tuak or rice wine flowed freely.  Staying sober at that point in time was a huge challenge.  Teams of young & old musicians took turn to make sure the music played non-stop into the night and into the cold morning mist of 5am. I guess the tuak kept them going.

The evening was a big contrast in culture as live pop band at the community hall accompanied dancing couples at RM1 a dance.  Chinese game of ‘holo’ has always been a part of Gawai in most Bidayuh villages as punters try their luck crowding around candle lighted tables.  In this merry making environment gambling is not a vice.

Day 1 -Part 1 (The arrival of the Indonesian visitors)

The next morning was the animal sacrifice near the border.  I do not recommend this event for the faint hearted and those who are animal lovers.  A tradition is a tradition.  A chicken and a puppy were slaughtered to thank the gods for all the good things in their lives. After this another round of procession and dancing near the community hall as VIPs officially welcomed the 27 Sebujit visitors.  Speeches & handing out mementos was the order of the day.  Brunch followed.

At midday  was the main offering or ‘miring’ of the pig followed by a traditional game or feat performed by Sebujit guys doing the vertical bamboo pole climbing – feet up first……man, you sure need lots of tuak to do that.

As were hurried out of the village to catch the same celebration in Kpg Sadir we saw 6 Bengkayang vehicles racing towards Gumbang to catch the action there.  Better late than never.

Best Gawai ever!!! Loads of thanks to Desmond for being such a kind host, Boon for making sure we did not miss out on any of the events  and lastly to Nawi with all the details and names . 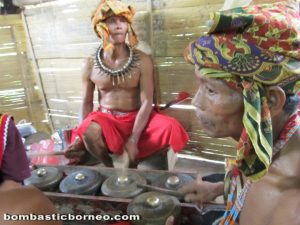 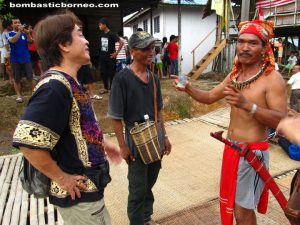 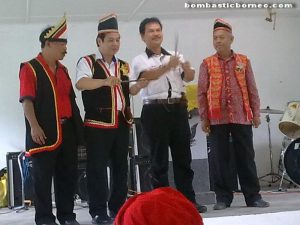 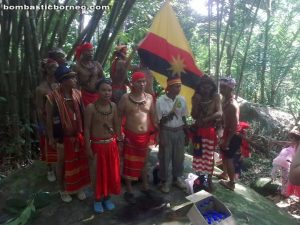