Lying on the Southern part of the Temburong District is the Ulu Temburong National park, the first National Park in Brunei Darussalam. The Park , which has an area of 48,857 hectares, situated within the wider Batu Apoi Forest Reserve, approximately 10 kilometers upstream from the end of the Batang Duri Road. The park has a large area of primary rainforest that covers most of southern Temburong.  The forest in the park holds secrets, many are still undiscovered.

The timeless rivers which have carved their routes across the land are one of the most exciting features of the Park. There are many tributaries which flow continuously into larger streams and main rivers. Some channels are dry most of the time, but swell into torrents during heavy rains. High waterfalls are common along small tributaries.

The forest is rich in flora and fauna, and the jungle can be explored along walking trails from the Park Headquarters. The main visitor route leads to a lofty canopy walkway. When floods and overgrown undergrowth permit, you should be able to continue to the Sungai Apan waterfall or tackle the rugged two-day walk to Bukit Belalong.

Access to the Park is not swift or direct, but for those who make a visit, the journey itself is full of adventure. The journey from Brunei-Muara to Temburong relies very much on the public launch service. The route follows channels in mangrove running east ward from the mouth of the Brunei River.

Entering Sarawak territory, the launch crosses the mouth of the Sungai Limbang, then across the southern arm of Brunei Bay lies the mouth of the Sungai Temburong which snakes its way through mangrove forests inland to Bangar Town.
Bangar is the administrative and trading centre of Temburong District. From here, a 30 minute bus ride (16km) is needed to reach Batang Duri which is the base for Brunei’s Outward Bound School and the embarkation point for Temuai longboats. 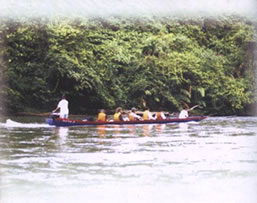 Temuai, a craft steered by Iban men and women who, with remarkable ability, manage to avoid sand bars, boulders and submerged logs.

The Temuai ride up the Sungai Temburong starts from Kampong Batang Duri. The duration of the onward journey varies with the state of the river. Going up the river, once can see some of the typical features of riverine forest. The common species along the banks are Mengkala or Aping (Arenga Undulatifolia) and Pinang (Pinaga Tenella Var. Tenella).

Aping is conspicuous with its large dull green leaves and leaflets with striking wavy margins, whereas tenella has a beautiful small clustering palm with narrow leathery leaflets. A brilliant orange coloured blossom of the akar katup-katup (Bauhinia spp.) or the Camel’s Foot can be seen from the river.

Travelling quietly up the river also provide an opportunity to hear and watch birds. For example; the waterside forktails, can be observed. Varied and melodious songs from other birds such as the bulbuls, babbler and flycatchers can also be heard. However, the most spectacular are the impressive hornbills. Hornbills are the largest fruit eating birds in the rainforest. They can be heard and seen throughout the forest. One species commonly heard here is the Rhinocerous Hornbills.

Apart from the flora and fauna you can also see the scars of the landslides along the river. Ecologically, landslides constitute an important feature at the Park. They destroy areas of standing forest and create new habitats for re-colonisation by plant and animal life.

You get off the temuai here. This is where you register your name. Once you’ve done this, you can continue the journey via the boardwalk. From this point, you can observe the confluence of Sungai Belalong and Sungai Temburong. This is a very interesting spot indeed. Here, one can see a moving river. Especially when it rains up river of Sungai Temburong and not at Sungao belalong one can observe a contrasting difference in the colour of the water. Sungai Temburong will become turbid whereas Sungai Belalong will remain crystal clear and vice versa.

Thus far the department has constructed footpaths leading to the various parts of the park; four chalets, each can accommodate 10 people; 30-metre tall hide for animal watchers; a camping site; huts for the weary to sit and relax along the footpaths at every 150 metres; footholds for climbing hills or slopes; bridges and an information hut.

From here one will journey up the boardwalk to cross the river on a suspension bridge. The walk up the ridge will be time consuming. It shall take you through an untouched rainforest. Notice that the taller trees form a dense canopy, preventing sunlight from reaching the forest floor. As you know, sunlight is crucial to all life forms and here in the dark rainforest, smaller plants have devised unique and ingenious ways of getting some. Some are climbers, others yet living a hundred feet off the forest floor called epiphytes.

Along the trail are some fine specimens of large dipterocarp trees. The name dipterocarp (di-two;ptero-wings;carpus fruit) means two-winged fruit. Trees of this family are the dominant trees of the tropical rainforests. They are also the largest and the most valuable timber. Many of the larger trees in the rainforest form walk-like extensions at the base called buttresses, providing extra support as they grow taller. Some species of dipterocarps flower only once in sixty years!

Apart from the trees, you can also observe different types of palms. The fan palms are represented by three species os Silad (Licuala spp.). The fishtail and sugar palms ca be distinguished by their jugged-margined leaflets. Also found is the massive tree palm, nibung (Oncosperma horridum), which can be recognised by its hideously spiny trunk and spiny green crown shaft of leaf sheaths. The growing point or ‘cabbage’ (umbut) of the nibung makes a good vegetable/salad.

Along the trails you will notice the tree with a beautiful, smooth, orange-brown to pinkish-grey bark that peel off in flakes. This is the Pelawan tree (Tristasnia spp.) a relative of the Australian Gum tree. The peeling off feature explains the local Bruneian Name, Selunsor meaning ‘to slip down’. It is believed that the bark has medicinal value.

A birds-eye view of the surrounding forests can be had from the not-to-be-missed Canopy Walkway. This steel structure rises some 50 metres from the forest floor to the level of the highest trees, a totally different form of lie exits. Epiphytes or plants wholly growing on others for support, are found among many different families and may be herbaceous or woody, and includes even the algae and lichens growing on leaves and tree trunks. Epiphytes depends on the ‘host’ plant only for support and the majority do not appear to cause any ill affects on the host except in the way of causing branches to break due to their being over-laden with plants. Orchids and aroids (plants of the yam family, Aracea) provide many examples of epiphytes. Though many epiphytic orchids are comparatively small, there are notably large ones. For example the Tiger Orchids, Grammatophyllum specsciosurn.

Another species that can be found in the high elevation is the gringer. A few species of Burbidgea and Hedychium occur as epiphytes.

In addition, there are four minor waterfalls within the park for those interested in cooling off after a trek in the forest.

Accommodation is available at the Ulu Temburong National Park Headquarters. There are four chalets, each can accommodate 10 people; a camping site. Booking of accommodation is best made through travel agents in the capital, Bandar Seri Begawan. Some of these agents can be found online. A package booking through an agent should also cover boat and road transfers.

The rules and regulations are there to protect the Park for the benefit of visitors.

It is an offense to:

Enter without permit, kill, capture, poison or disturb any animals, cut, remove, destroy or set fire to any object or plants, living or non-living dead or alive, introduce any animal or plant into the Park, damage, erect any building or other structures, litter.

The minimum fine for the above offences is a fine of $10,000 and two years imprisonment (rules under section 52 Laws of Brunei, Chapter 46 Forest).

Visitors must obtain a certified permit before entering the Park from :

Take notice that any people visiting the park enter at their own risk. The permit to enter is granted on subject to the condition that the Forestry Department and/or the Government and/or any Officer shall not be responsible for any physical, mental or emotional injury sustained, or any loss of life, or property of whatsoever kind within the Park.