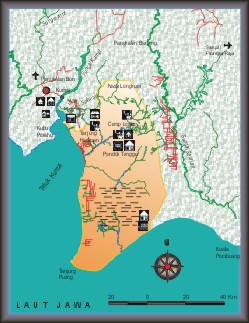 The orangutan of Kalimantan has dark reddish fur and no tail. As they get older, the adult malescheeks flesh out, resembling cushions. The older they get, the bigger these cheek flanges grow, giving them a fierce look.

UNESCO has declared Tanjung Puting National Park as a Biosphere Reserve, and it is also a Sister Park to Taman Negara Malaysia under a cooperation agreement between Indonesia and Malaysia.

Tanjung Harapan: This is the first station in the orang utan rehabilitation process. Situated in the midst of secondary forest and swamp forest, it has a guesthouse, an information centre, and trails.
Pondok Tanggui: Orang utans that have passed the semi-wild phase are moved to Pondok Tanggui. There, they are closely monitored from a distance, and human contact is avoided.
Camp Leakey: Founded in 1971 in the middle of primary forest, this is the location for semi-wild and wild orangutans, and for younger orang utans from birth until three years of age.
Natai Lengkuas: Bekantan research station, and watching other animals along the river.
Buluh River and Danau Burung (Bird Lake): Watching birds, in particular migrant species.

Among the cultural attractions outside the Park is a traditional rowing contest held in Pangkalan Bun in May.