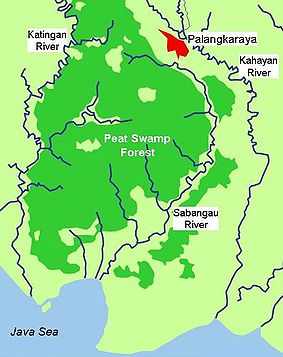 The national park is centered on Sabangau River, a blackwater river. It flows through the Kelompok Hutan Kahayan or Sabangau peat swamp forest (5,300 km2), between the Katingan and Kahayan rivers. The peat swamp forest is a dual ecosystem, with diverse tropical trees standing on a 10m – 12m layer of peat – partly decayed and waterlogged plant material – which in turn covers relatively infertile soil.

The severely degraded eastern part of the forest, between the Sabangau and the Kayahan, is officially designated for agriculture. However, since the failure of the Mega Rice Project, which drained large areas of peat forest in an attempt to create rice paddies, no further efforts are being made to make it suitable for this purpose.

The forest has been damaged by legal and illegal forestry. There is no longer any continuous forest cover where orang utan may cross the river. A satellite view shows a grid of logging roads throughout most of the forest.

However, the western part is now protected as either National Park or National Laboratory Research Area. A study of the area shows that the hydrological integrity of the forest has been maintained, and it is therefore ecologically resilient, although since it is close to the regional capital Palangkaraya it remains at risk.

The forest is home to the world’s largest orang utan population, estimated at 6,910 individuals in 2003, and other rare or unique species. The total Agile Gibbon population in the Sabangau catchment is estimated to be in the tens of thousands, but is declining fast.