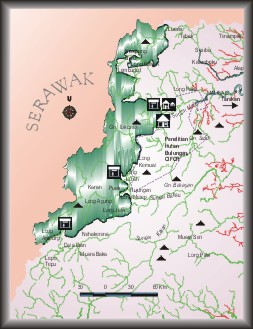 Kayan Mentarang National Park, with a total area of 1,360,500 hectares, forms the largest single area of primary and old secondary forest not only in Kalimantan but in the whole of Southeast Asia.
This Park has an astonishing diversity of plant and animal species, many of which are either endangered or protected, a huge diversity of ecosystem types, from lowland rain forest to moss-covered forest in the high mountains.

Some plants that have already been recorded in the Park include pulai (Alstonia scholaris), jelutung (Dyera costulata), ramin (Gonystylus bancanus), damar (Agathis borneensis), kayu ulin (Eusideroxylon zwageri), rengas (Gluta wallichii), gaharu (Aquilaria malacensis), various orchid species, palm trees and pitcher plants. There are still several plants that have not yet been identified as they are all new plant species in Indonesia.

There are about 100 species of mammal (15 of them are endemic species), eight species of primate and more than 310 species of bird, of which 28 are endemic to Kalimantan and have been registered by the ICBP (International Committee for Bird Protection) as endangered species.
There are several rare species of mammal, like the clouded leopard (Neofelis nebulosa), sun bear (Helarctos malayanus euryspilus), Hoss leaf monkey (Presbytis hosei canicrus), white-fronted leaf monkey (P. frontata frontata), pig-tailed macaque (Macaca nemestrina nemestrina), and banteng (Bos javanicus lowi).
Kayan Mentarang National Park and Betung Kerihun National Park both directly border upon Sarawak, Malaysia.

Rivers such as the Bahau, Kayan and Mentarang are used as transport routes into the Park. Along the journey, visitors can not only catch glimpses of various animals around the river, they also experience at first-hand the agility of a longboat in navigating the rapids or struggling against swift currents.

The 20,000-25,000 people living around the Park area, representing various Dayak tribes, e.g the Kenyah, Punan, Lun Daye and Lun Bawang, have a vast store of wisdom that is very much in line with the principles of conservation. Since it plays an important part in their daily lives, the local people are skilled at conserving the biodiversity that surrounds them. Several varieties of rice, for instance, are cultivated and harvested in ways that can support the needs of the community.

Archaeological remains in the form of ancient graves and stone tools are found in many parts of the Park, indicating that the area has been inhabited for at least the last 350 years. It is considered to be one of the most important archaeological sites in Kalimantan.

This high biodiversity and the pristine condition of the area pose a challenge for researchers to discover new species and develop the benefits that can be derived from them. For adventurers and tourists, there is the challenge of discovering for themselves the natural beauty of the forest, with its rivers and steep cliffs, and learning more about the fascinating Dayak culture.

From Samarinda to Tarakan by plane, about 1 hour; then from Tarakan to the Park by speedboat along the Mentarang river. This takes from 6 hours to one day.